Stena Lines offers a 36 hour cruise package from Karlskrona to Gdynia, two nights on a ferry and a full
day on land. We made the trip a few years ago, see Gdansk. In 2017 the cruise was similar, comfortable
and with good food. The only change is the day ticket on public transportation in the 3-cities is 23 zl.

On 30 March 2017, we visited the World War II Museum in Gdansk, about a week after it opened. It is an excellent
museum that everyone should experience. The museum is very popular, but the Polish Minister of Culture is critical.
It does not conform to official “historical doctrine.” See this excerpt from In Your Pocket for more information.

The entrance to the museum is three floors below ground level, down the steps on the right.

The displays are on one floor and cover all aspects of the war, including the propaganda
leading to the conflict, the everyday life of people, resistance and deportations, and the effects
long after the fighting ended. The brown corridor labelled B is the central path for visitors. 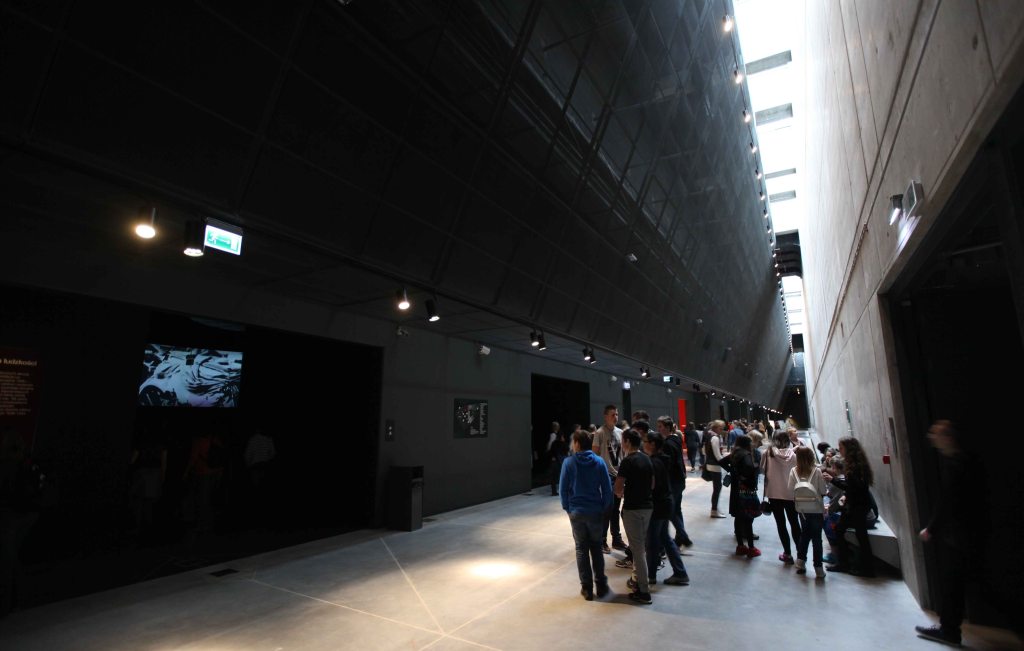 The B corridor with access to display rooms on both sides.

There are clear signs with information in both Polish and English. There are also good audio guides.

Communist propaganda from the Soviet Union. 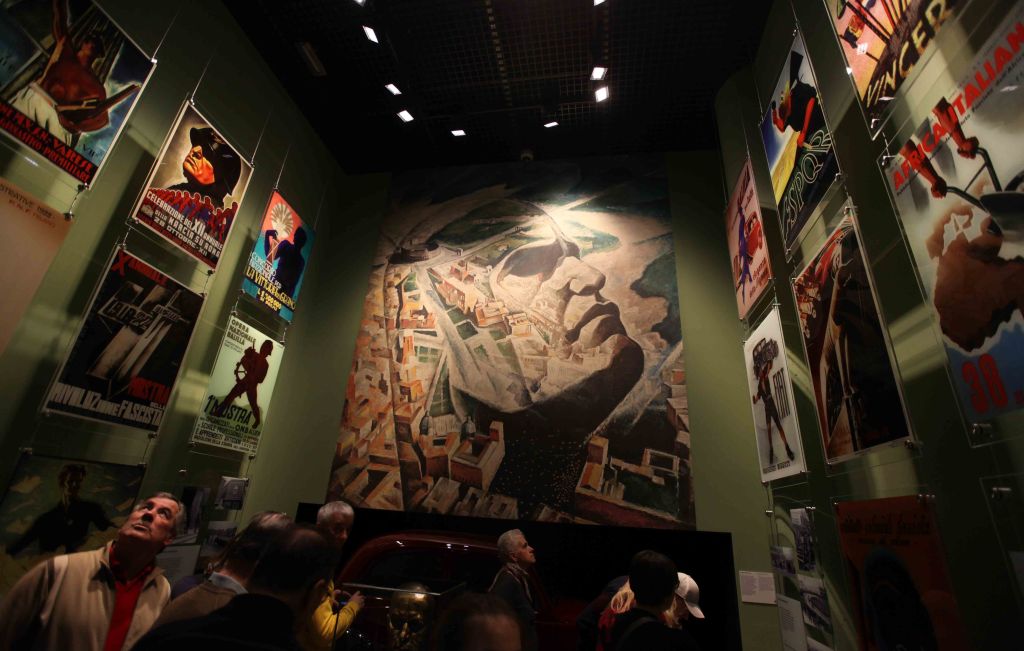 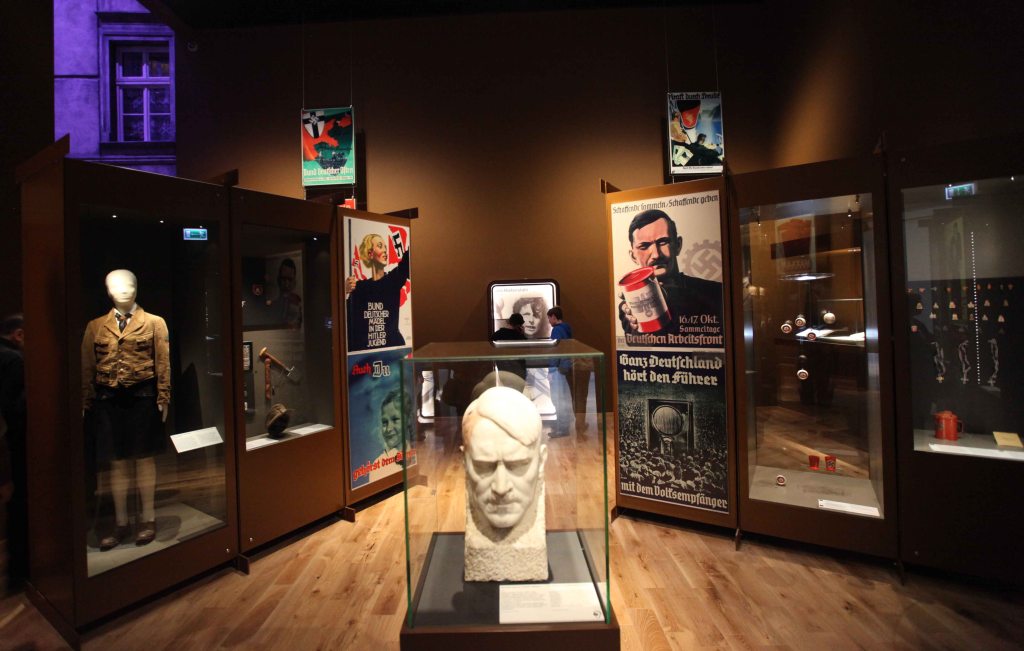 All countries involved in the WWII were covered.

Part of the display on Yugoslavia.

The museum shows clearly the thinking of the time in different European countries, such as
nationalism in Croatia. In a sound recording, a Croatian politician talked about how they would
deal with the Serbian population: 1/3 killed, 1/3 deported and 1/3 converted to Catholicism.

This room about the techniques of war shows, for example, the uniforms used by different armies. 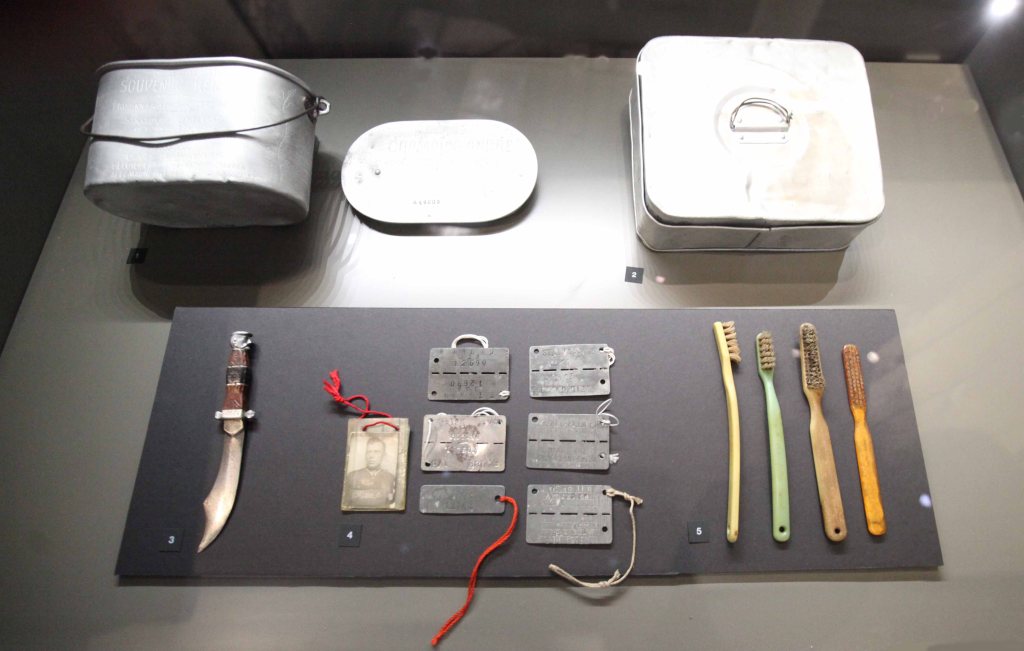 Some of the everyday items a soldier might carry. 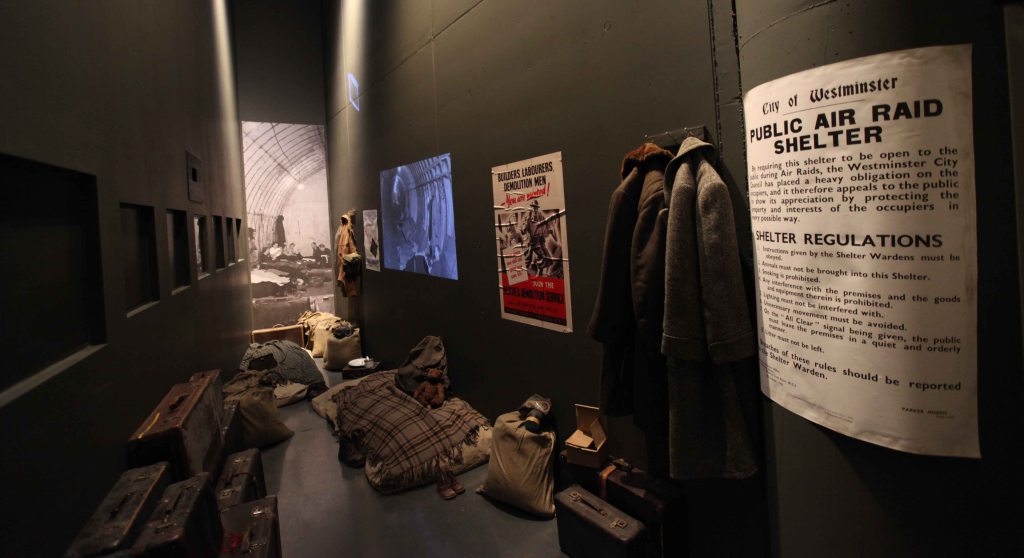 England, life in London during the bombing.

The holocaust takes a lot of space at the museum, appropriate considering how many people were affected.

There are texts and pictures, many photographs from the time, and video testaments from survivors. 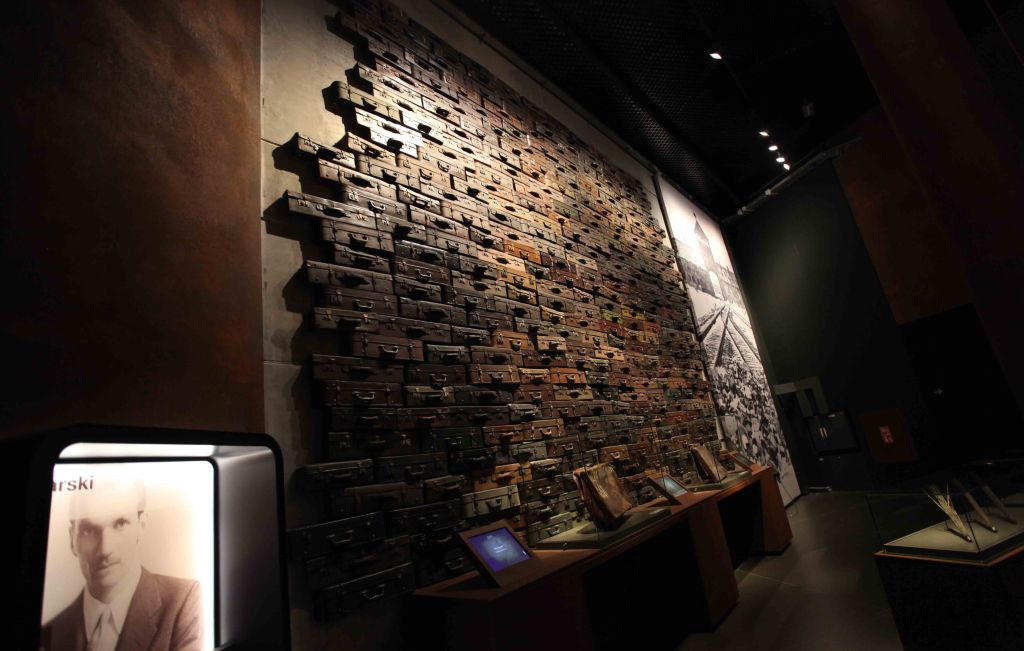 The man in the picture is Jan Karski, among the first to inform the world
about the concentration camps. His reports were not believed at first.

From life in the ghetto. It was considered that Jews needed less food
and were issued a separate ration card. Note the special ghetto banknote.

Lots of people were deported from many countries, far more than we may have believed.

Forced or slave labor was common. It involved hundreds of thousands of people. The metal badges
in the boxes to the left were used as identification tags for forced laborers at the Gdansk shipyard.

The map shows how people were moved. For example  80,000 people from
Slovenia, one third of the population, were forced to leave their homes.

There was resistance against what was happening, but many who resisted paid a high price for their courage.

Emblems of the resistance. 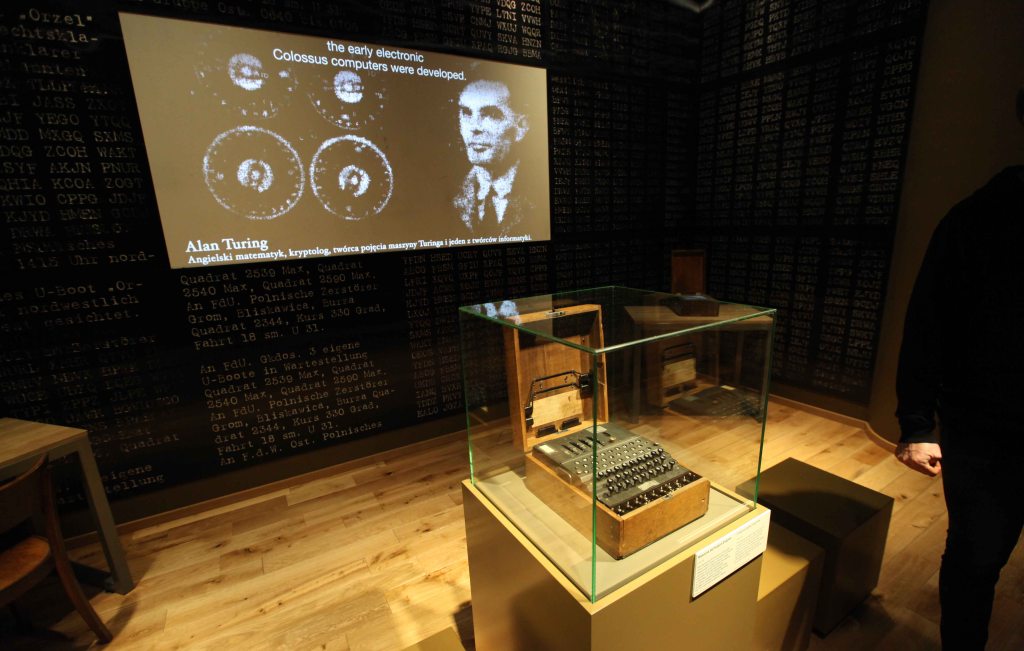 One of the original enigma code machines. The Polish Cipher Bureau first broke the message keys
at the end of 1932 and developed their own machines called Enigma doubles. The Germans then made
their machine more complex so the Poles could not keep up. Later Alan Turing at Bletchley Park cracked
the latest version of the enigma code and helped England get information about German plans.

The importance of keeping quiet, not to reveal secrets.

About the production of arms. 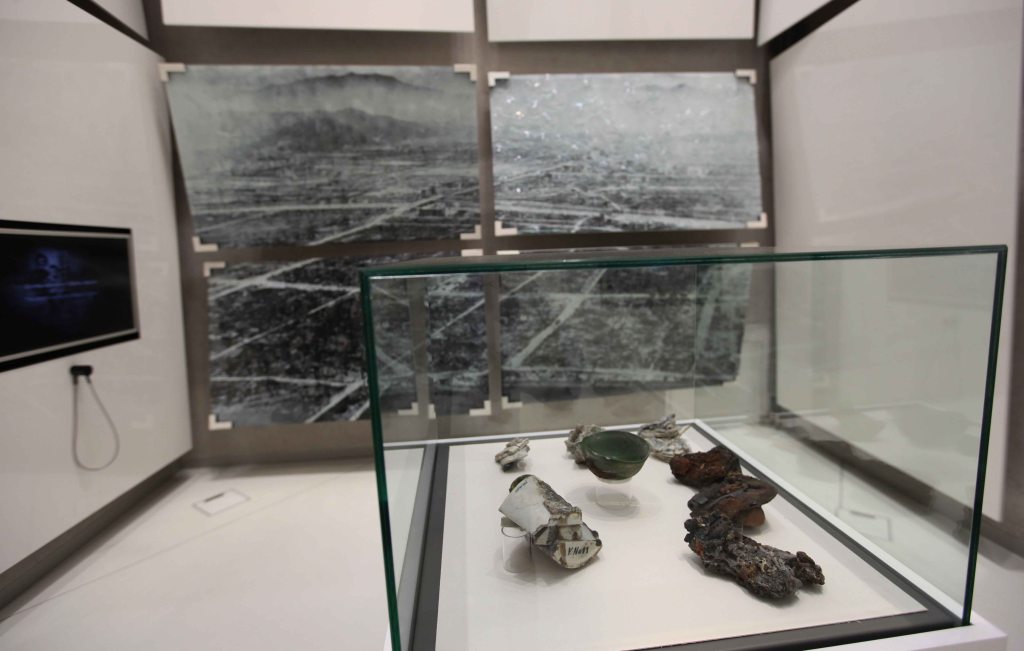 Melted porcelain clumps formed by the heat of the atom bomb over Hiroshima.

Kangaroo courts condemned those accused of collaborating with the enemy. The film to the right
shows a woman having her head shaved. Another film shows two young men having their heads shaved
because they were friends, but from different ethnic groups. A photo showed two women from different “sides.”
One of the woman gave a dress to the mother of her friend. She could have been accused of collaboration. 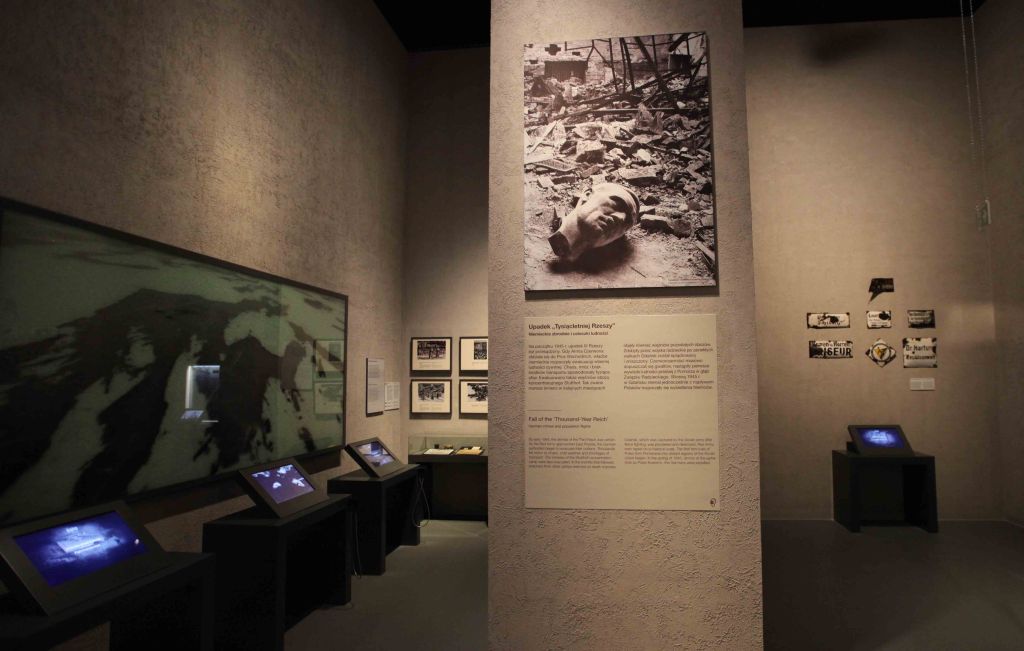 The fall of The Reich

These are photographs of holocaust victims, people who looked like anyone else.
What the museum presented so well is what happened to ordinary people during
the war, and how citizens treated each other. Resentment and hate, looking for
differences, allowed behavior that would seem impossible between neighbors.