We spent six weeks vacation in Hawaii between mid-December and the end of January. It was our first visit since 2005.
This page has a mix of pictures from the entire stay. There are separate pages under “Hawaii” from hikes and special activities.

Early morning on Waikiki Beach. It is a nice walk between Ala Moana Beach and the end of Waikiki.

It does not take long before the beaches are filled with people. Many tourists are up very early, not adjusted to the time change. 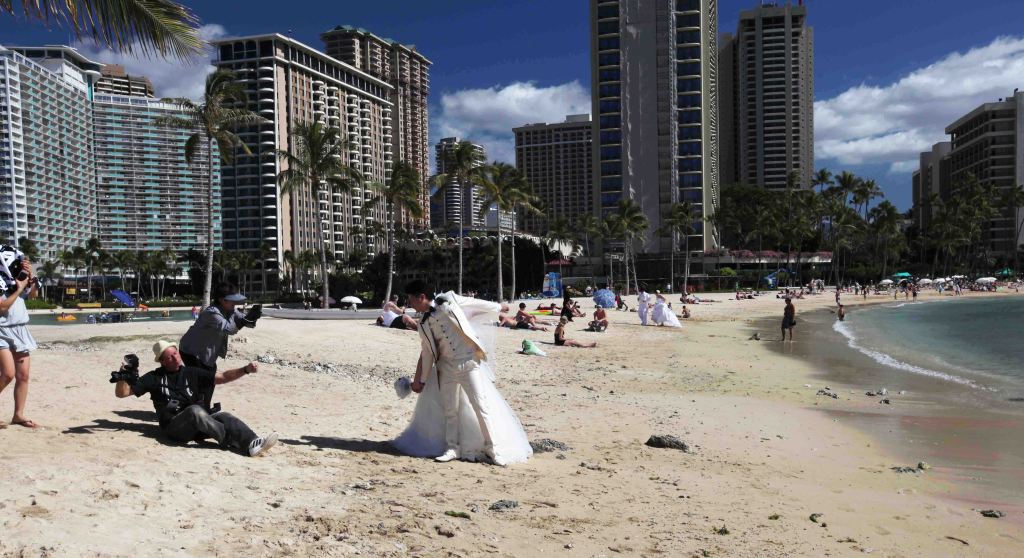 The beaches are used as a backdrop for wedding photos. There are two couple in this photo.

Surfboards along a narrow alley leading to the beach.

There are very many hotels and condos along the marina between Waikiki and Ala Moana. 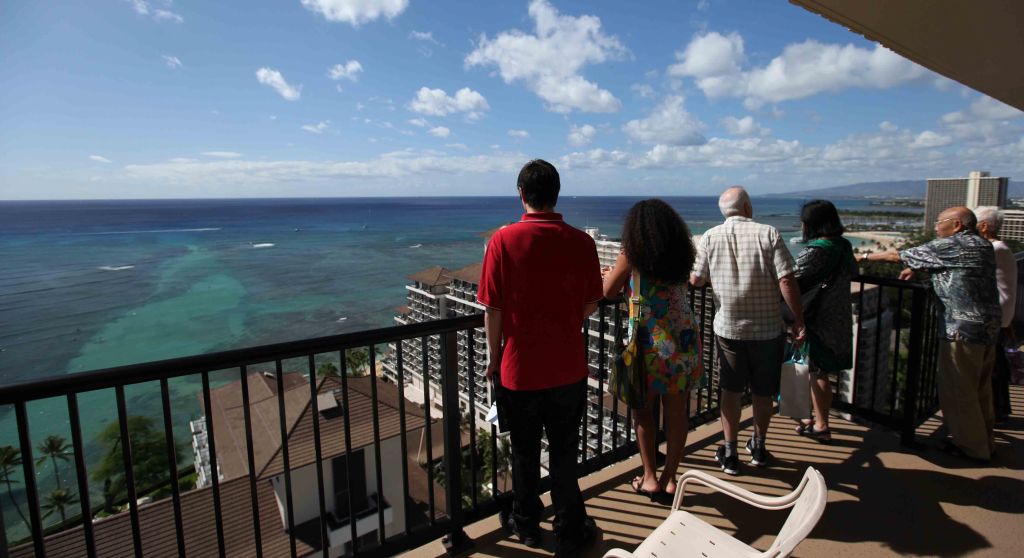 Annette’s Uncle Wil and Aunt Helen from San Francisco have a condo near the beach, just in from the Halekulani Hotel. 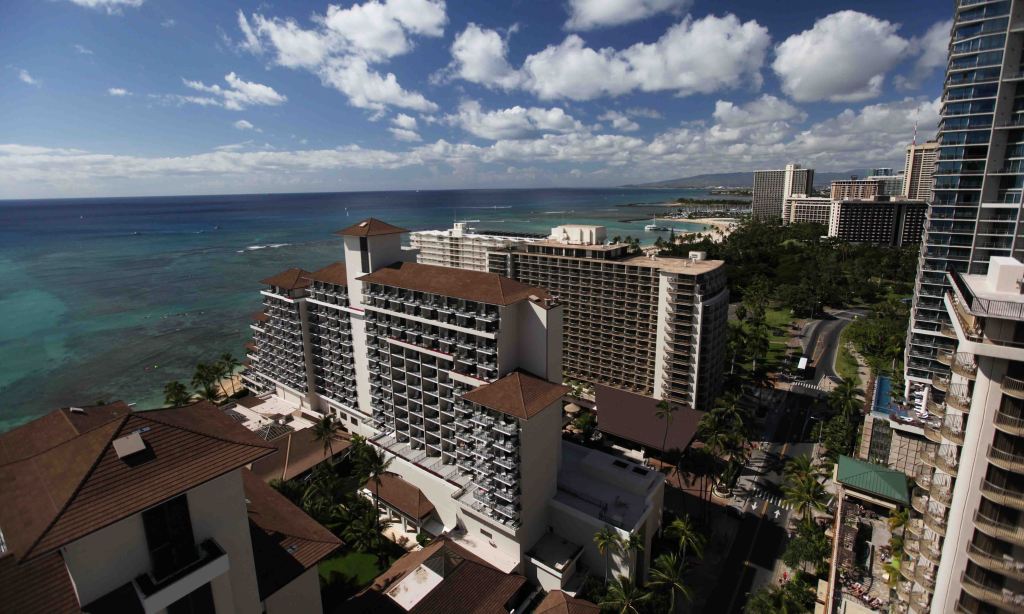 View from the roof top of the building.

There are many places to visit on Oahu, here the Pali lookout. Bishop Museum offers a lot of information about Hawaiian history. 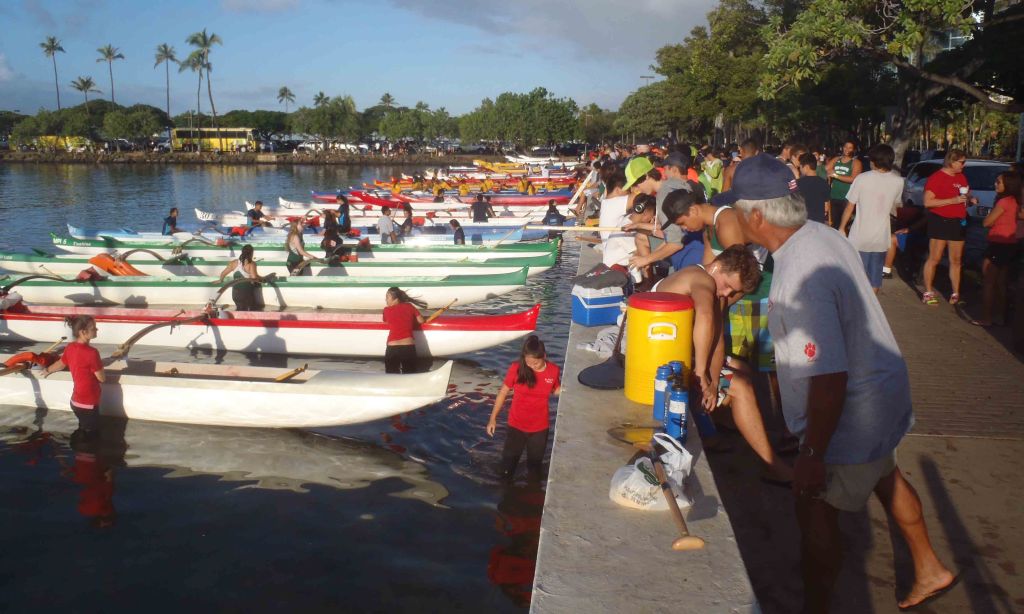 Canoe racing early Saturday mornings, from 08.30 at Ala Moana. 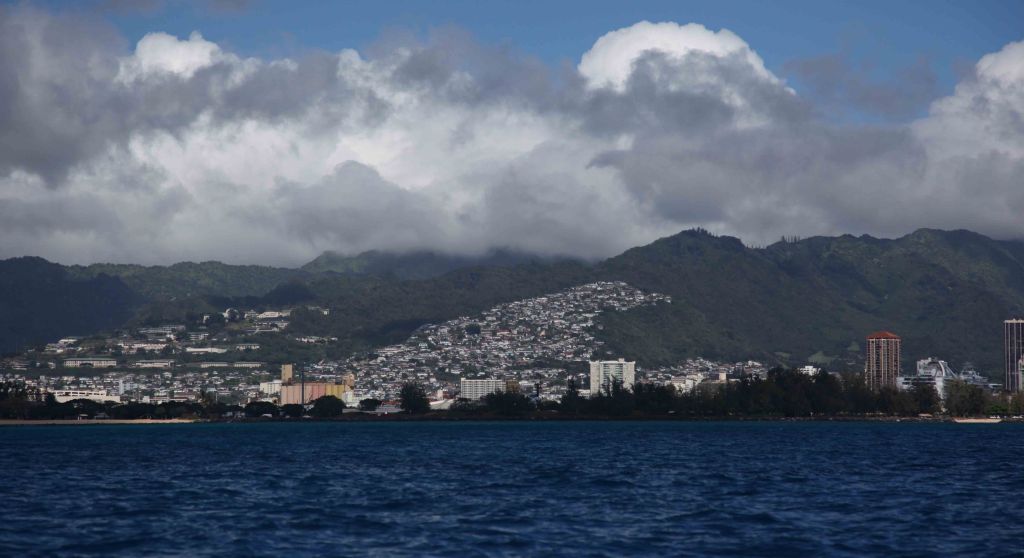 We stay in a house on Alewa Drive, in the center of this picture, fairly high up where it is cooler.

The back side of the house, with bedrooms on the left, dining and living rooms in the middle, and kitchen on the right side.

The open plan makes it perfect for family dinners. This is the Hu family, Annette’s mother’s relatives. Many of the Hus have moved away from Hawaii. 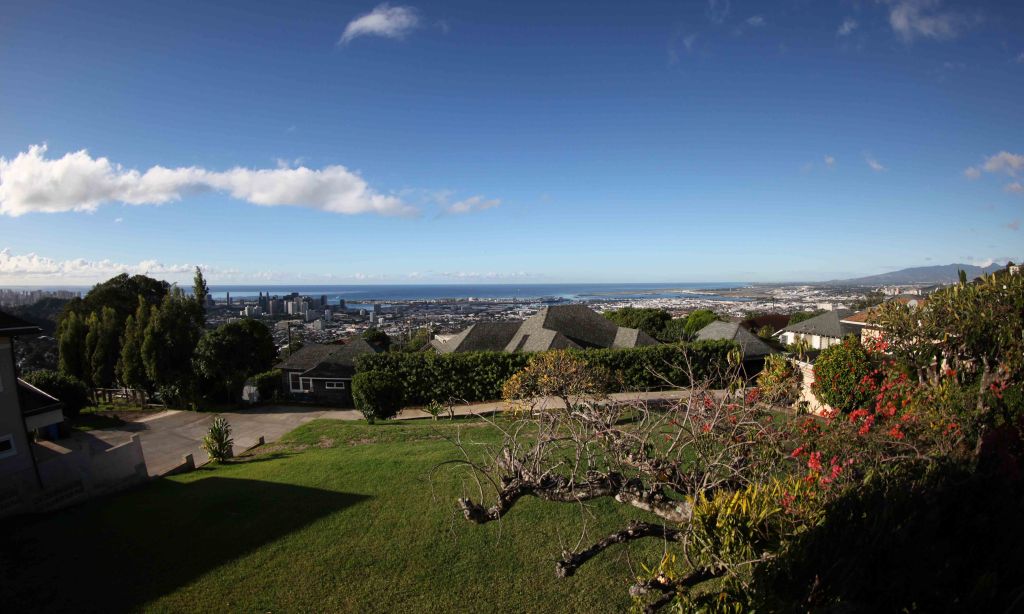 The view from the house. One can see (from left), Waikiki, central Honolulu and the harbor, the airport and the inlet to Pearl Harbor. 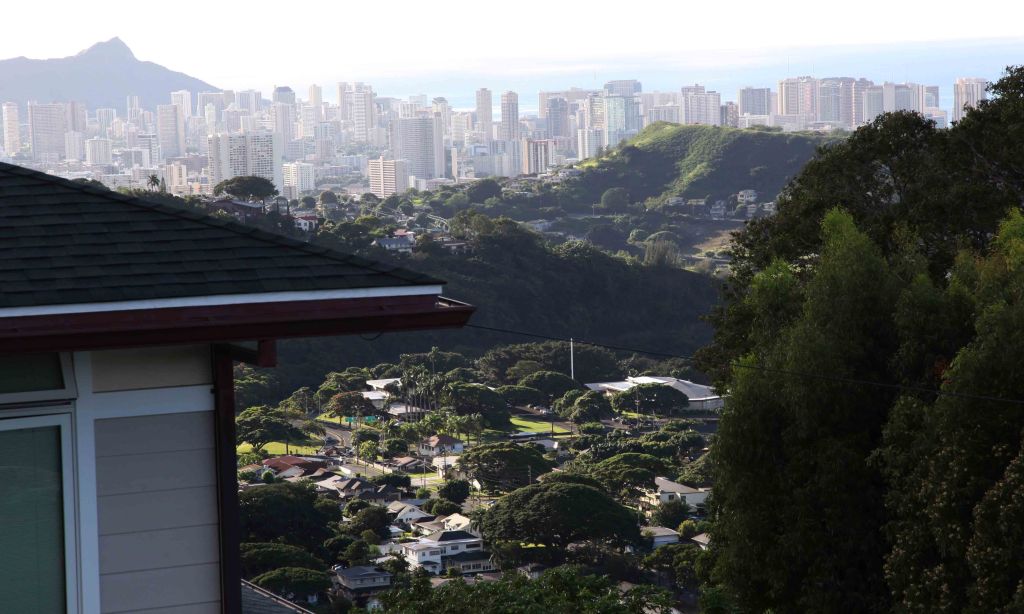 The view towards Diamond Head and Waikiki, far in the distance. 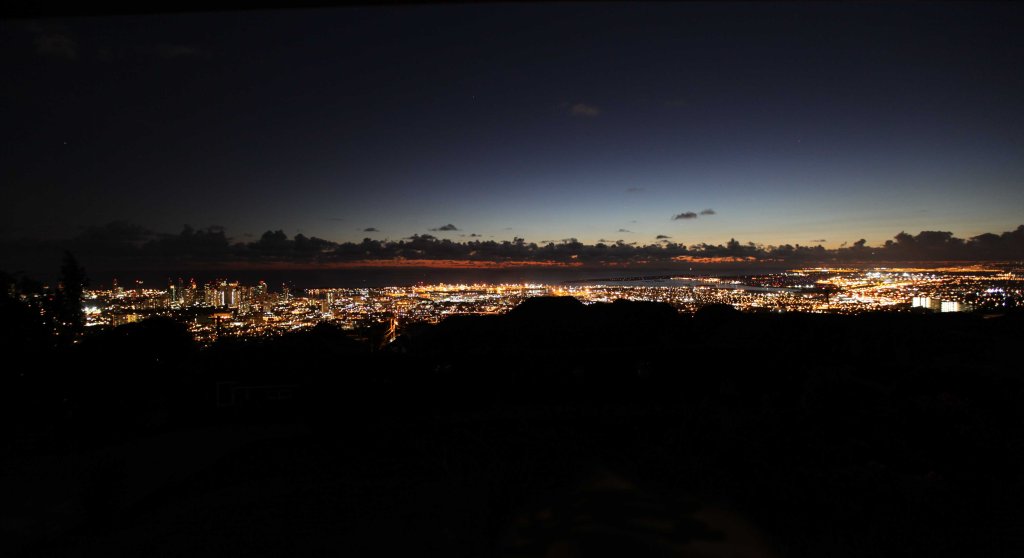 The view as the sun sets.

Honolulu has an old Chinatown that has changed a lot in the last decade. Many of the best Chinese restaurants have
closed or have moved, but there are Vietnamese and Thai instead. There are new market areas in the centres of blocks. 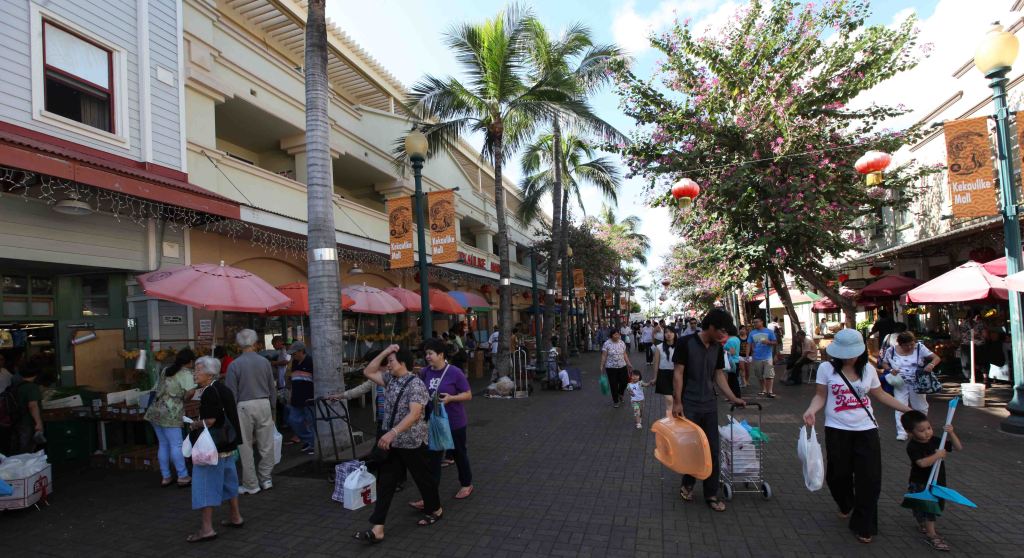 A narrow street transformed to a pedestrian way with shops and restaurants on either side. 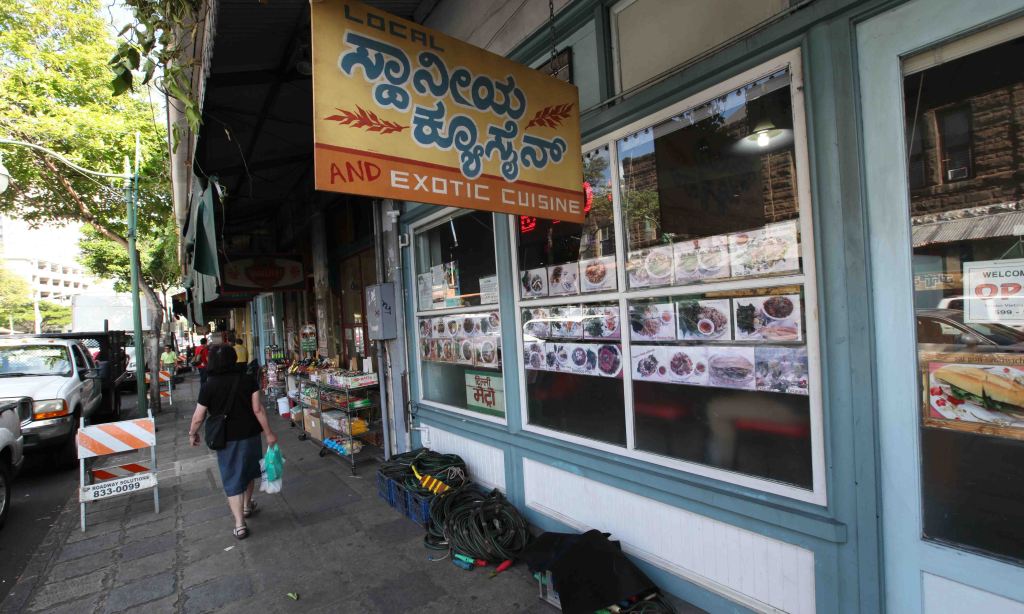 Central Chinatown was closed one weekend to shoot a film directed by Russell Crowe. It was supposed to be set in India, and the
shops got new signs. This restaurant has a mix of Hindi and Vietnamese. We could see the bright lights from home when they filmed. 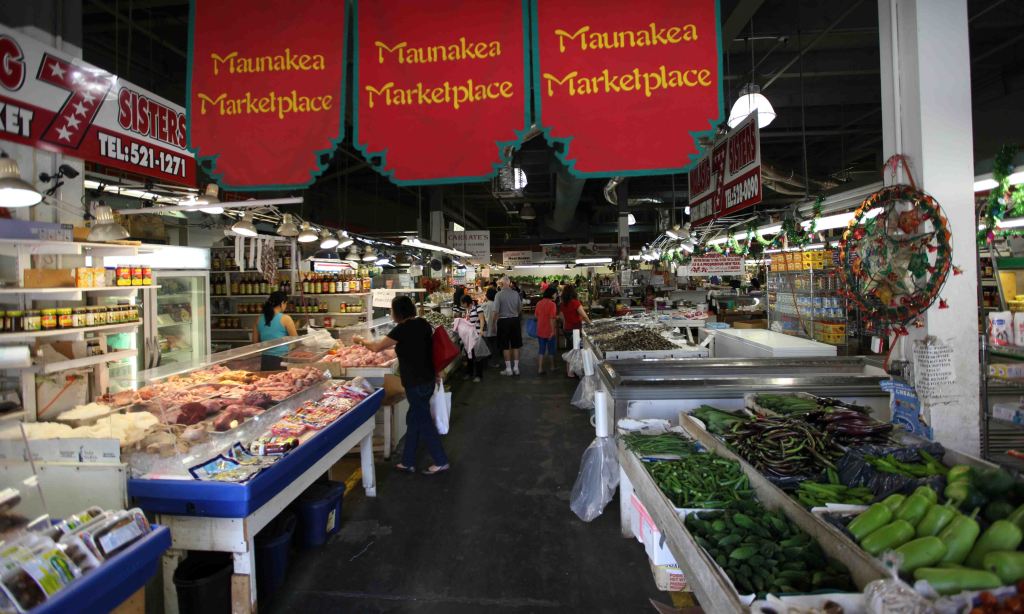 One of the new market places. Old buildings were cleared on the inside and re-used. 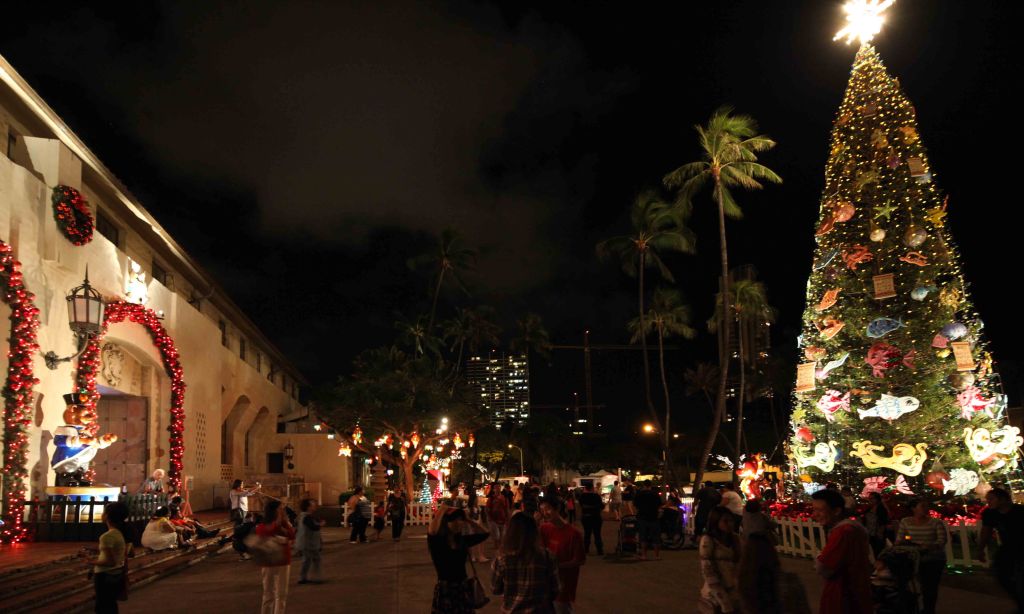 Every year Honolulu has large Christmas displays around downtown, sponsored by private business. This is outside the City Hall. 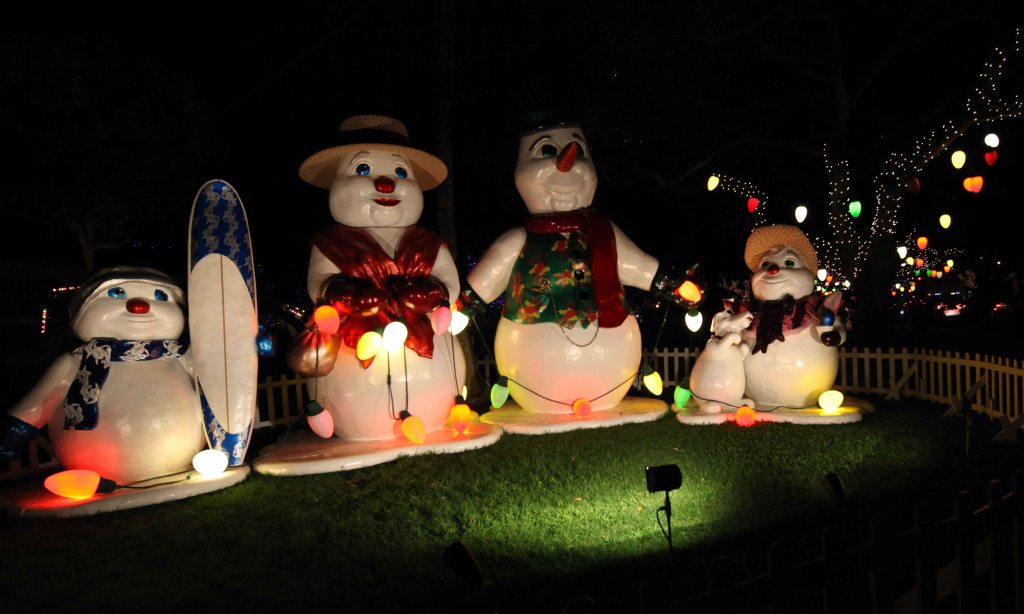 A small train that ran around the area. 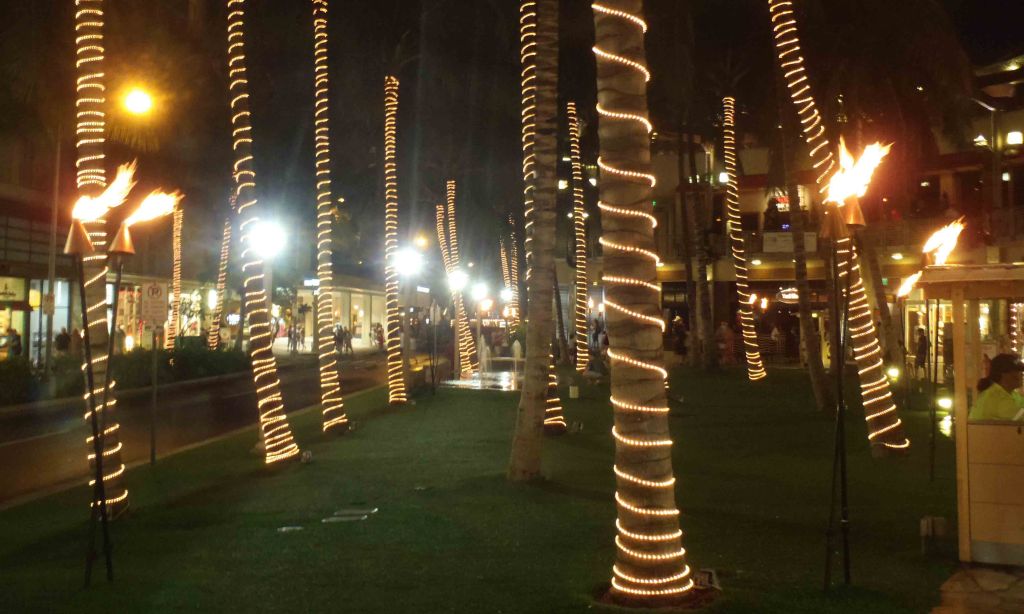 New Year was celebrated at the home of cousins Kathy and Vernon, with this view of Waikiki and central Honolulu.
There were fewer fireworks than before because rockets had been banned. Firecrackers could be bought with a permit
from the City Council, at a cost of $ 25. There were several large public displays sponsored by the city and large hotels.
It is illegal for private persons to set off fireworks. The police reported that they issued 56 citations on New Years Eve. 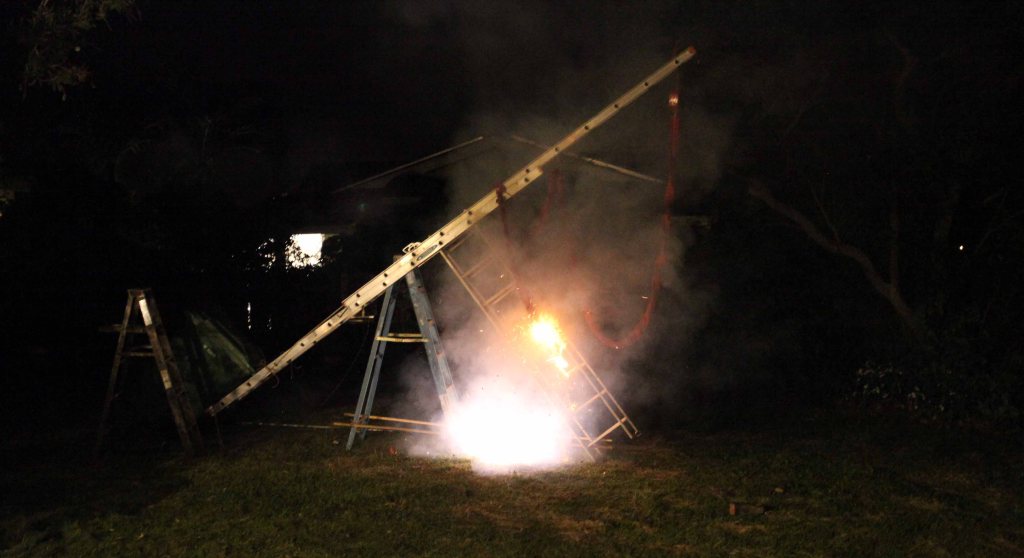 Vernon had a permit for firecrackers, and had bought a very long strand with 50,000 firecrackers that were set up like this.

We visited the Kahala Hilton Hotel, where you can swim with dolphins. We had lunch there, but the
main reason we were there was to visit the Sony PGA (golf) tour at Waialae Golf Course near the hotel.

We visited on a day before the golf tournament started, and before it was forbidden to take photographs! We were allowed to walk
around the course and to stand very close to the players. Some players were busy signing autographs and taking photos with fans. 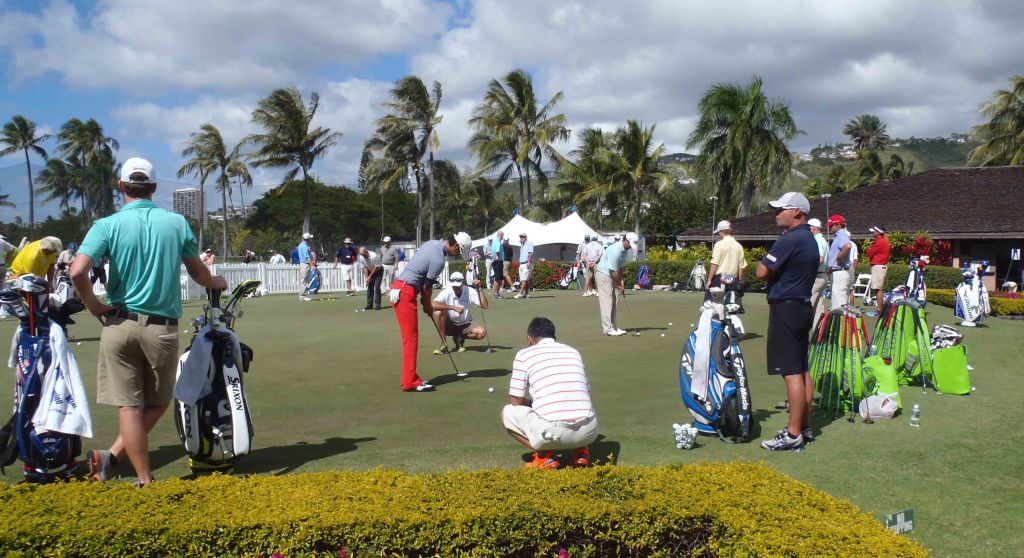 Competitors testing clubs and practicing puts in the players’ area. 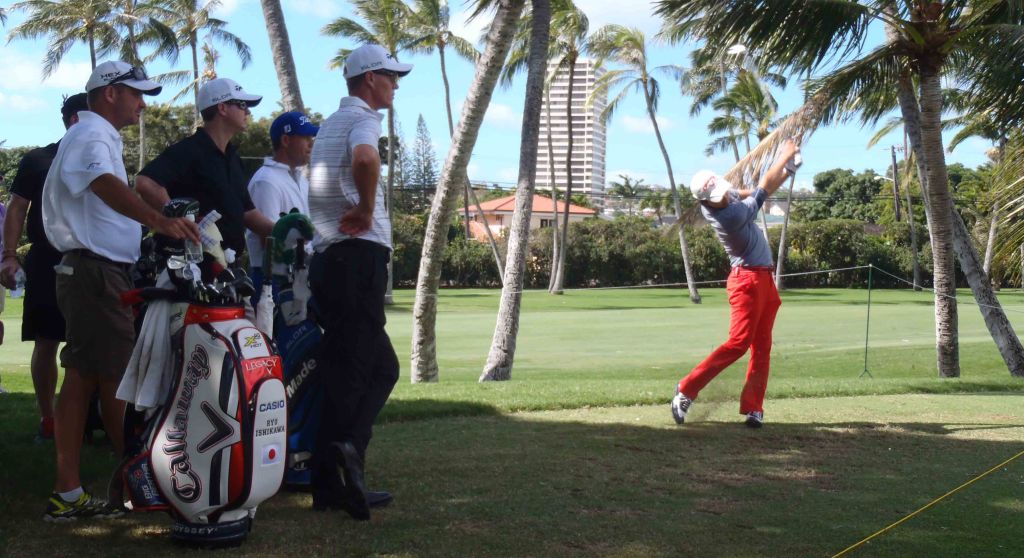 As we walked around the course, we were invited to this house that opened directly onto
the course. The house is for sale for $3.5 million. That would include a lot of free golf balls. 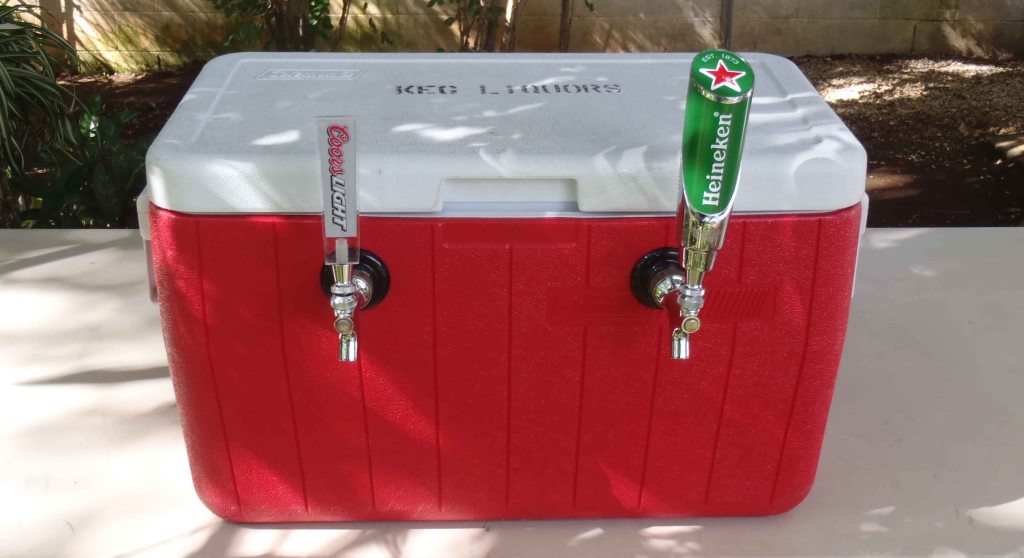 It was a tradition by the owners to offer free hotdogs and drinks during the PGA tour. These beer taps worked!

A great event was fishing with Vernon’s friend Mel, who owned this boat. He took meticulous care of it. 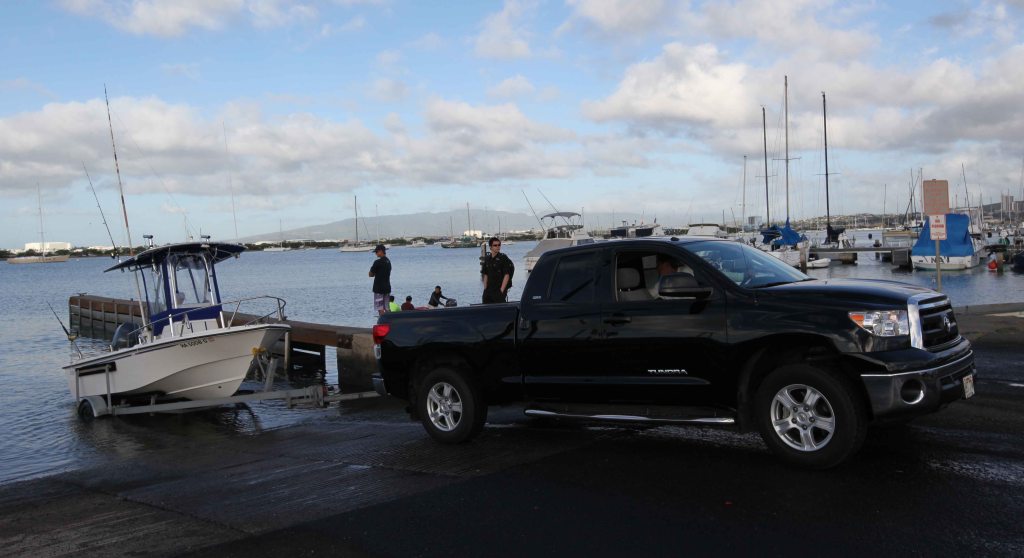 The boat was launched on Sand Island. 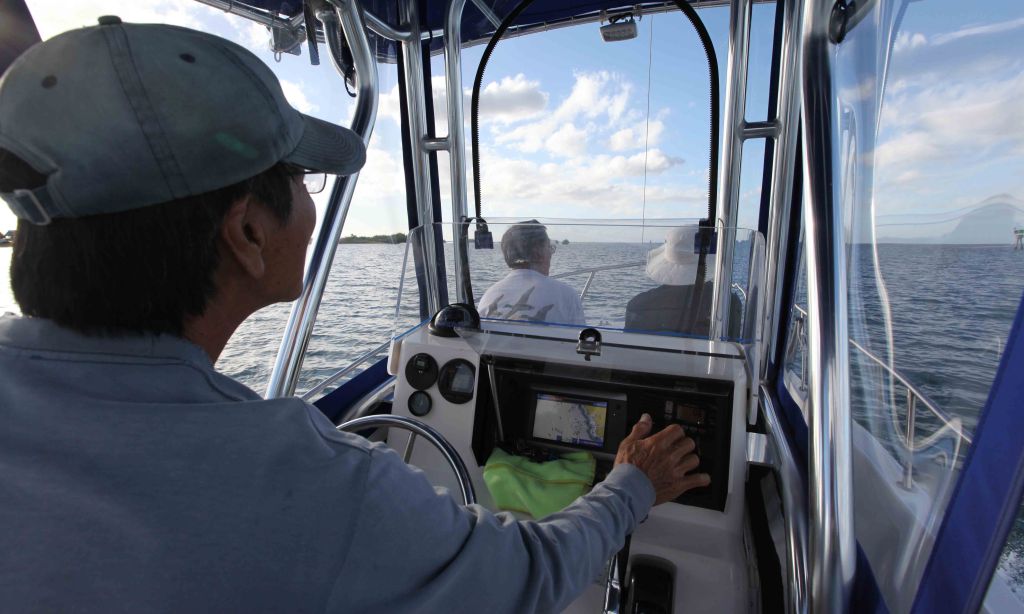 We started off by hanging hooks after the boat, as we tried for tuna. Eventually we focused on bottom fishing instead.

We had great views of Honolulu from the water. 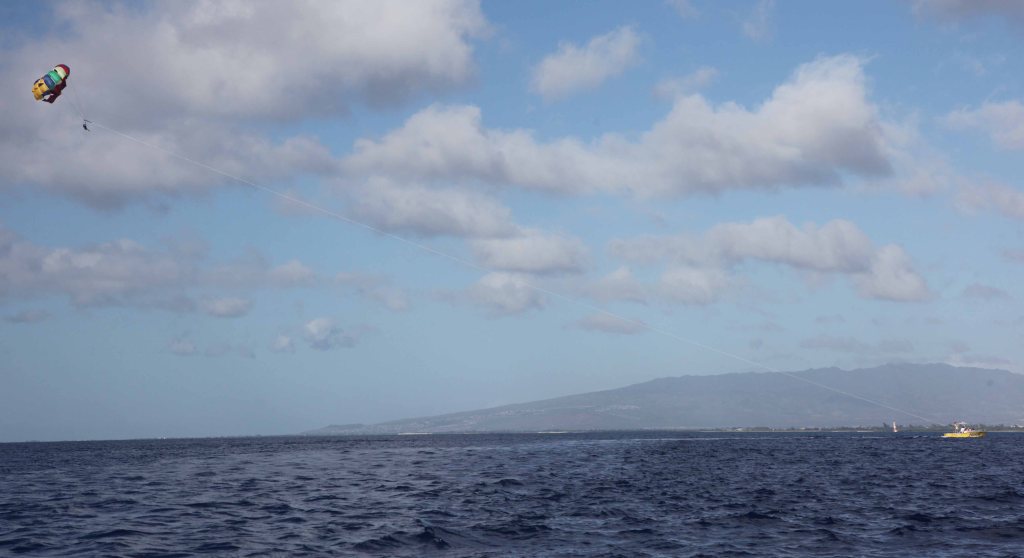 One of the tourist attractions outside Waikiki.

One of the fish we got, a kumu or goatfish.

Humu­humunuku­nuku­āpuaʻa, one of several we caught and let back into the sea as they are not good to eat. 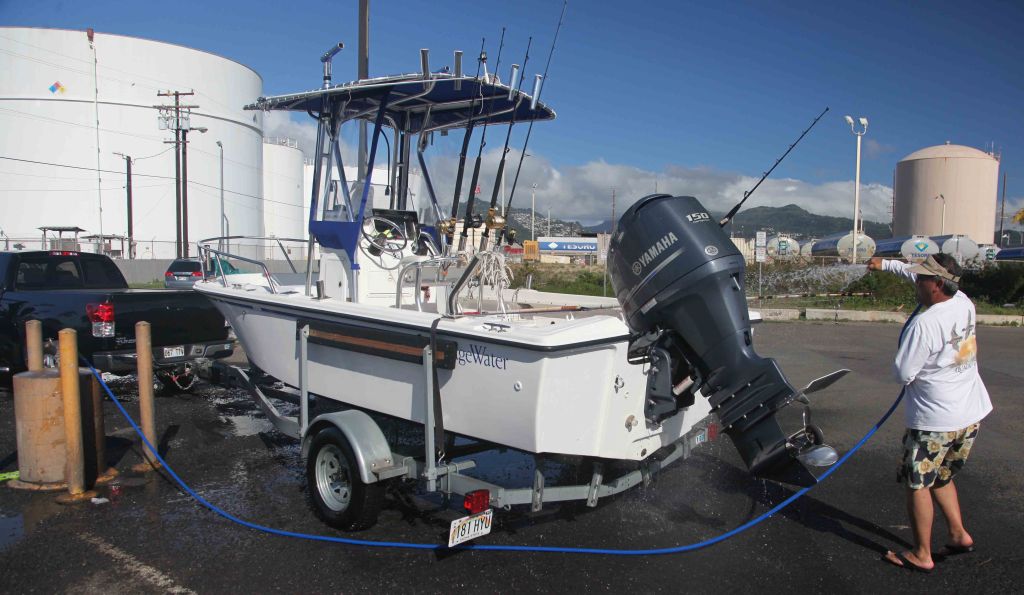 Vernon hosing down the boat with fresh water after the fishing adventure. Both boat and trailer needs thorough washing to get rid of the salty sea water. 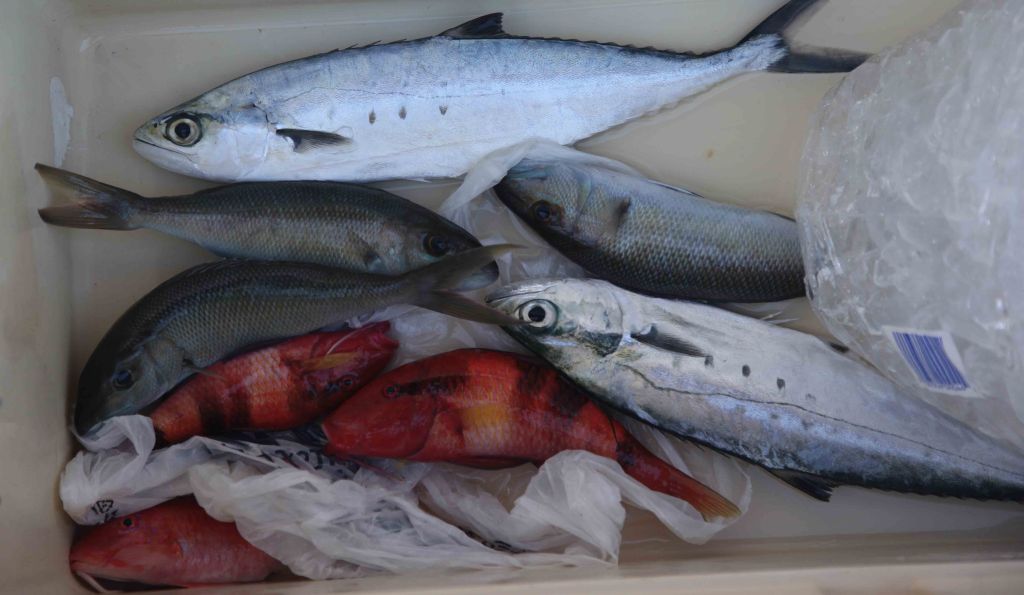 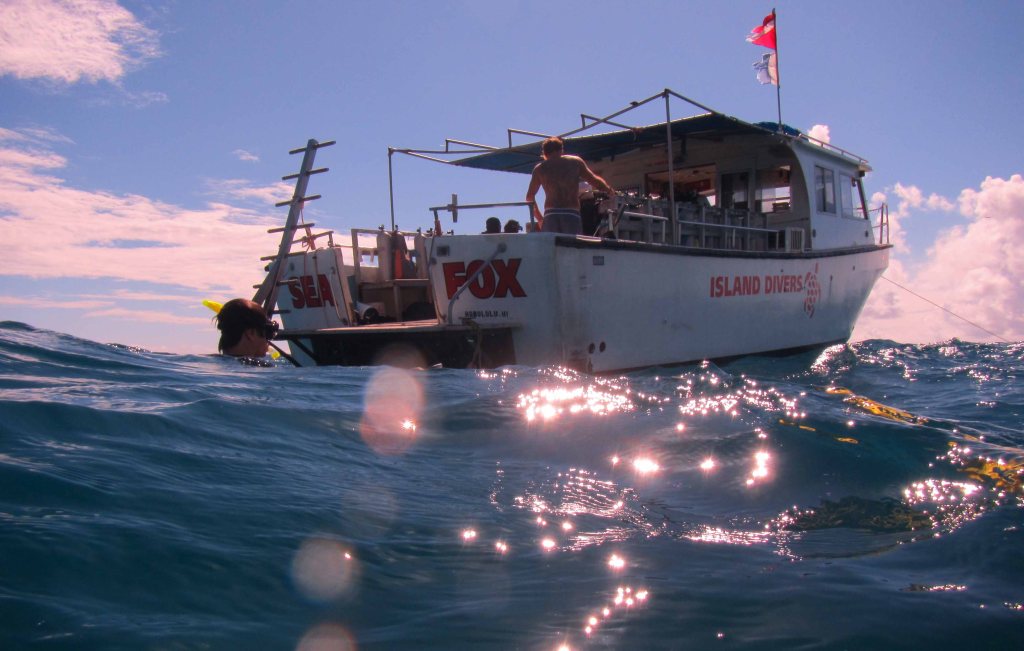 We went out three days to dive, and for our son Erik to get an open water diving certificate.

Island Divers were very popular, have professional staff, and have many customers! There are 18 divers in this photo!

Erik managed to find this juvenile frog fish (the yellow “lump”), which is very rare. 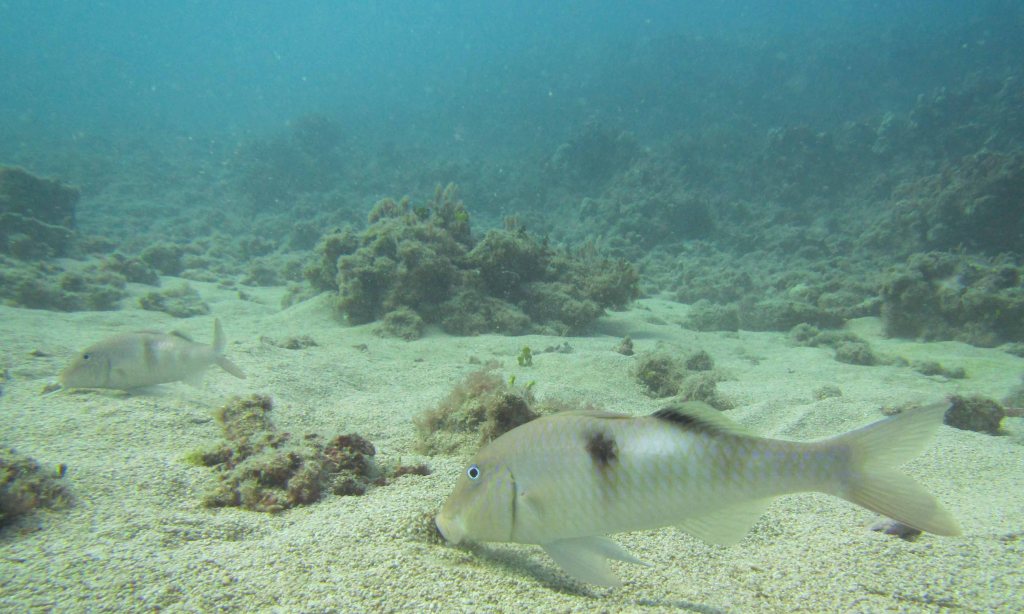 Air bubbles from the many divers.

Another great event was to go out sailing with this Jeanneau Sun Odussey 40 DS.

Tom and Ki, with Vernon and Kathy.

Although there was little wind, it is still a privilege to be out on the water, and there are great views of Honolulu.

Another sunset seen from a flat on the 20th floor. We had dinner there with relatives on one of our last days this trip.

It was time to fly back home.