Postojnska Jama is one of the most famous caves in the world. It opened in the early 19th C and has had more than
250 million visitors since then. Although there are many tourists, the tours of the cave are very well organized. It does
not feel crowded or rushed,  and there are lots of staff around to answer questions. It is well worth a detour to visit.

The information sign to the left shows when you can visit the cave. There are organized tours almost
every other hour during the winter and every hour during the summer, about 2,100 tours per year.

There is lots of parking and you pay a fee for the day.

The entrance to the cave is at the end of the building. 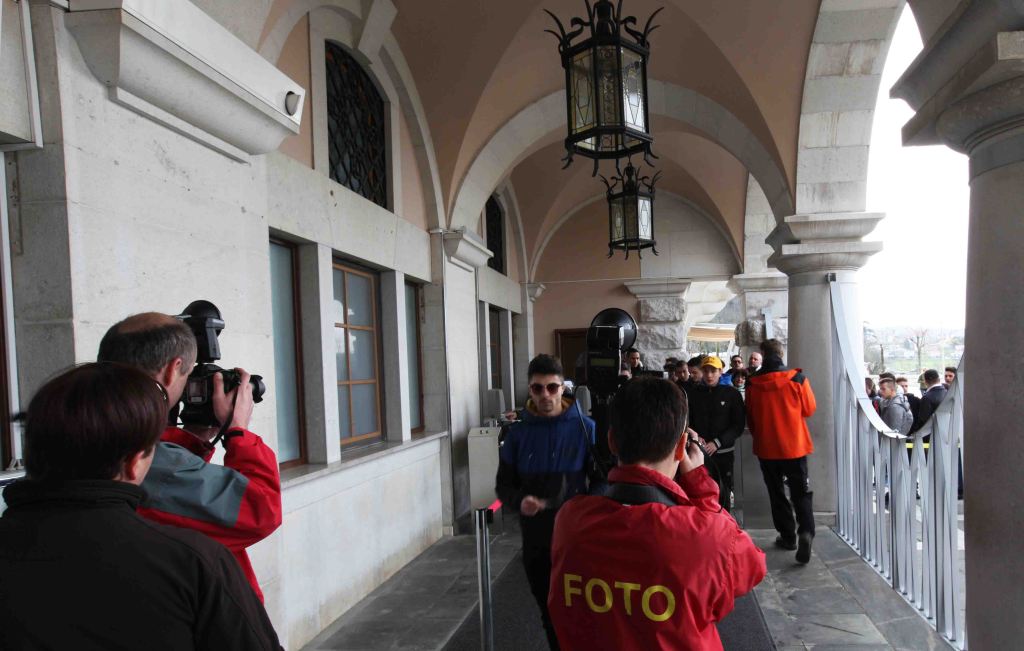 A photo is taken as you pass the turnstile, and you can buy a print at the end of the tour.

Trains like these take visitors deep into the cave, and several trains are used for each tour. 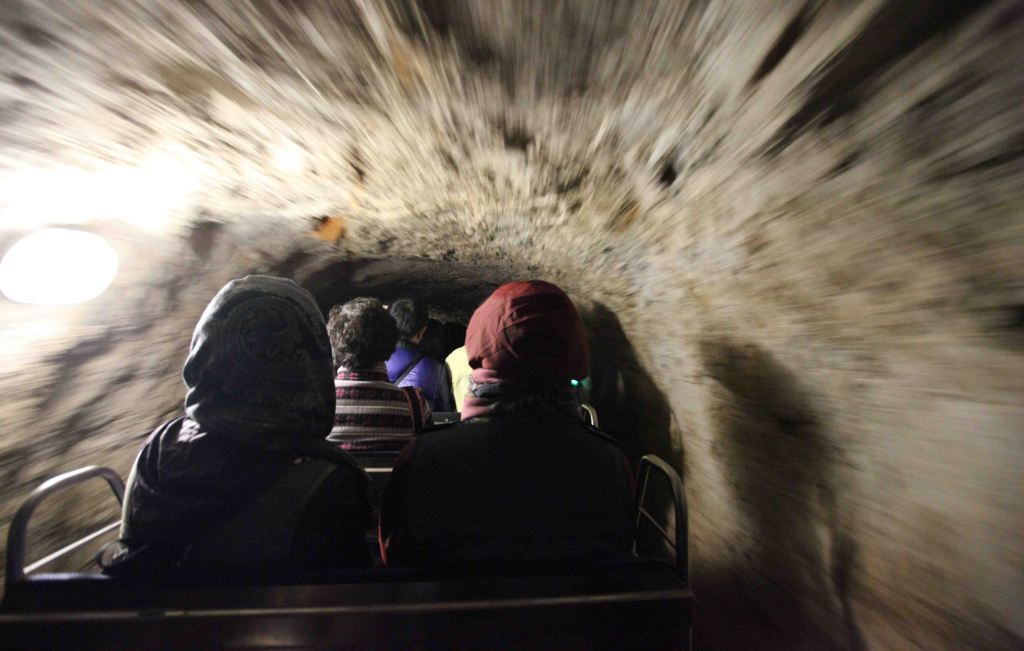 You have to watch out for the tunnel walls, that are very close in many places. One tends to duck when passing
under low passages – and it feels like the train travels fast. The ride will take you through several larger rooms. 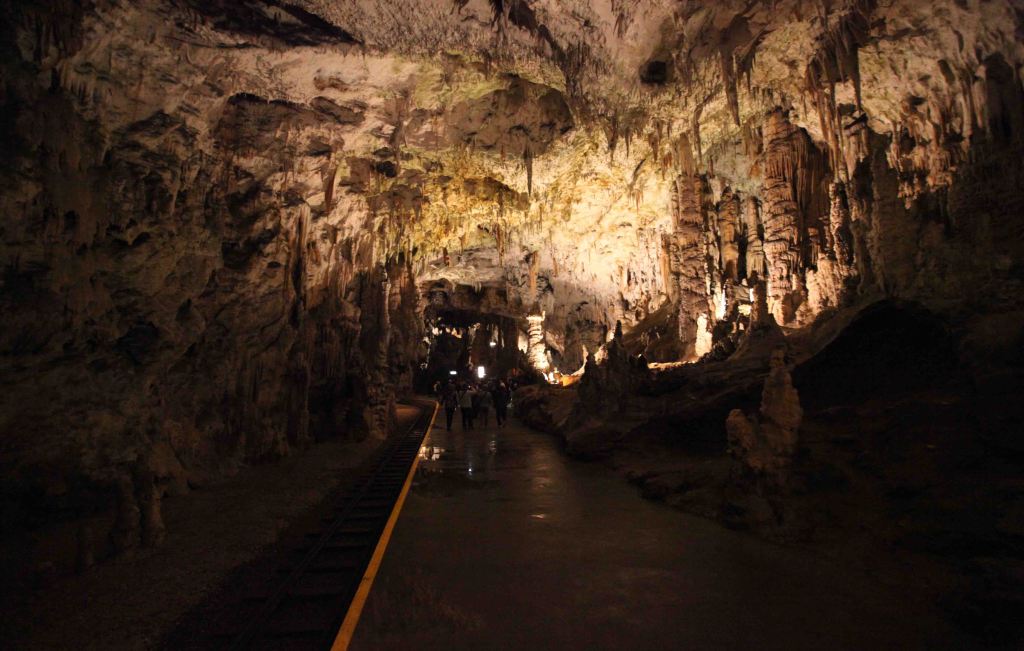 The train ride takes you about 5 km into the cave, to this platform. It is a constant 8 degrees C  inside the cave. 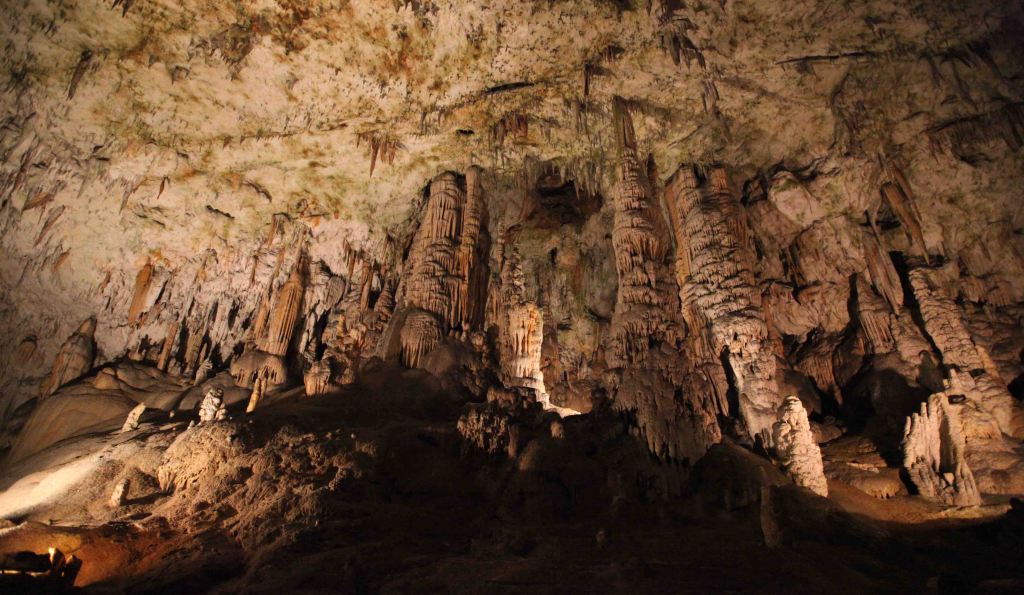 Formations next to the platform where the train stops.

The groups can be very large, at our visit three train loads full of passengers.

The visitors were divided into language groups, each with its own guide. There were well lit signs for the gathering points.

The English speaking group at the beginning of the 1.5 hour walk through the cave.

Pathways are painted with non-slip paint, so it feels safe to walk even where the path goes up or down.

The guide we had was very good and gave a lot of information, and welcomed any questions.

There were different rock formations. In the ceiling are “spaghetti” stalactites.

These curtain formations are very old, and grow by about 0.1 to 0.3 mm/year.

The famous column formations that are used in the Postojna Cave logo.

The cave is well lit so you can see the different formations very well. 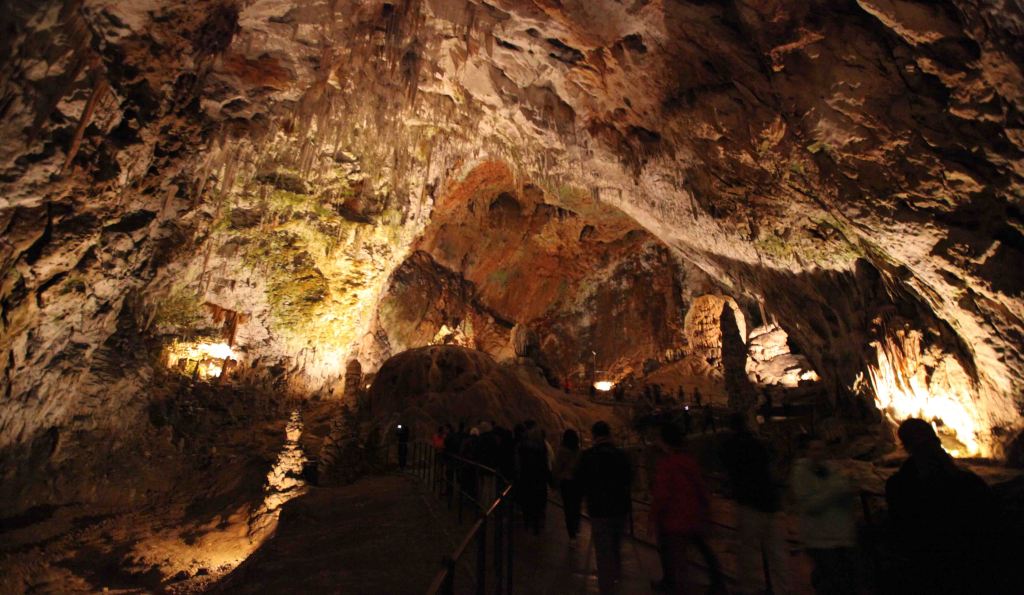 Some of the caves you walk through are very large, like this one.

Almost at the end of the walk, there is a display of the famous “Proteus”. The display box is very dark and no one claimed to see it.

The walk ends in a very large concert hall where there is a souvenir shop and restrooms. Concerts are held here a few times per year.

The walls have different colors. Red indicates high iron content. The green color is mold and has developed as an effect of visitors. 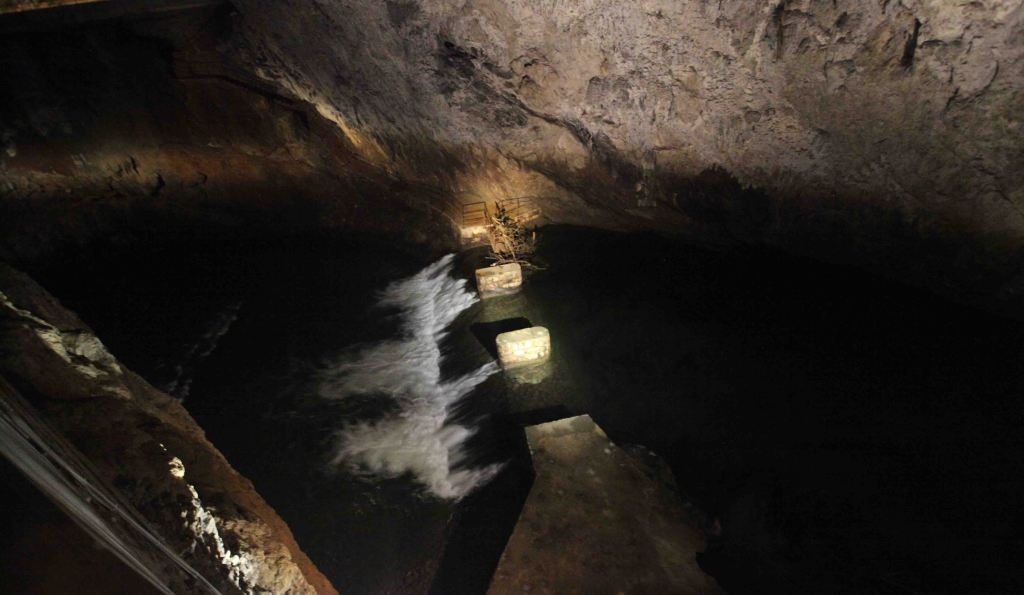 From the “concert hall” is a short walk to the return train ride, passing the underground Pivka River. 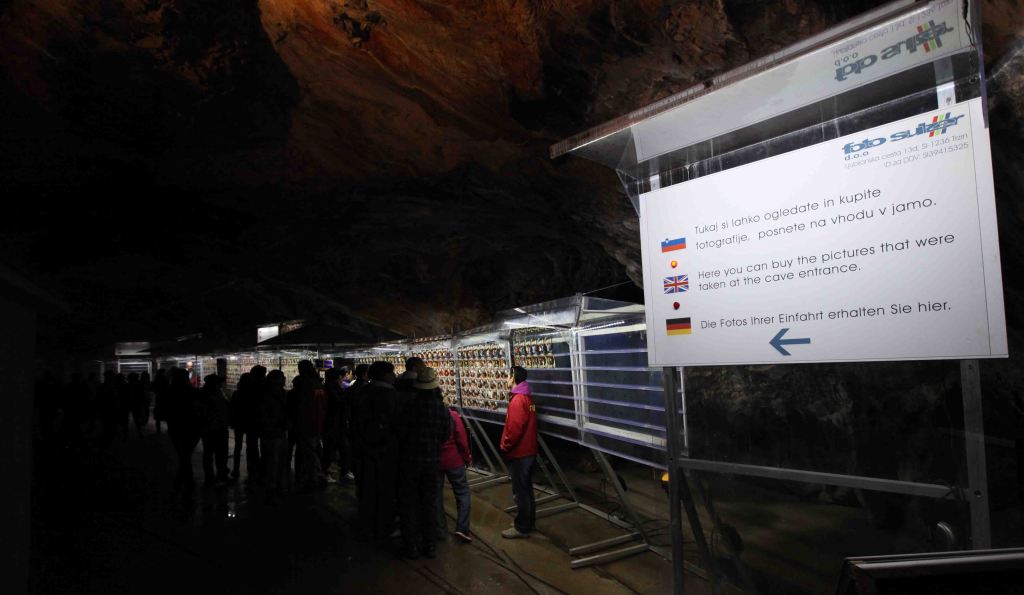 At the train stop at the exit, you can buy the photos that were taken when you entered. 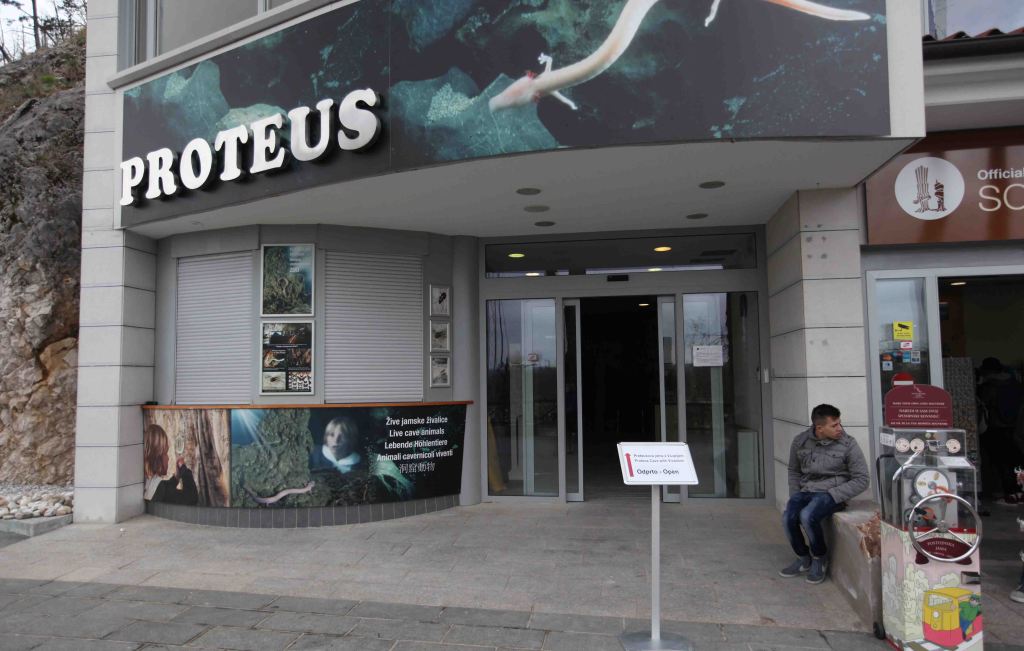 Close to the cave is a separate showing of the Proteus and other cave animals. 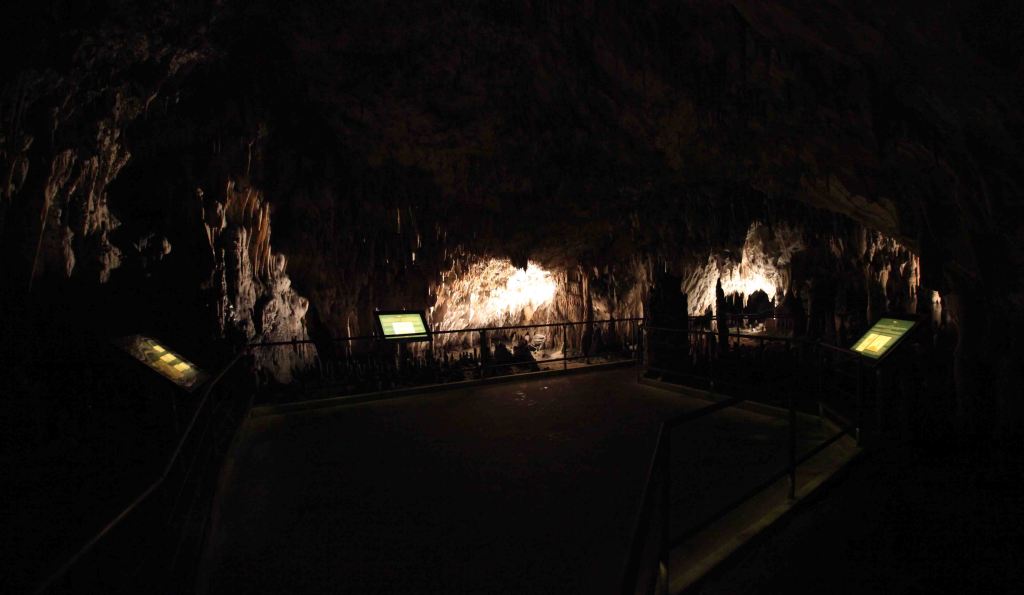 The first part has information boards about the caves and animals found in the cave.

One of the information boards, about how stalactites are formed.

There is a short walk from the first room (seen in the back) to the display of animals and insects found in the cave.

The room with boxes with live cave animals and insects. 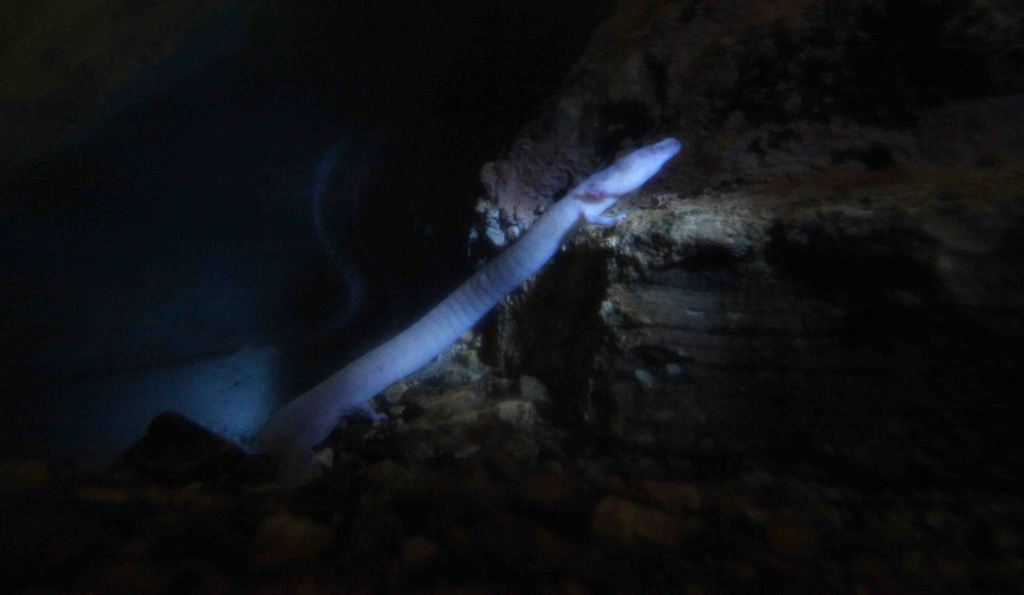 There are several live Proteus, but the easiest way to study them is to look at a model.

Model of the Proteus.

This part of the cave has been visited for a very long time. These graffiti are dated from the early 19th century.

Some of the display boxes contain very tiny insects, like this slenderneck beetle in the middle of the picture.

The room with displays of the Proteus and insects. Although it is very dark, paths are well lit. It is around 12 degrees C in this cave. 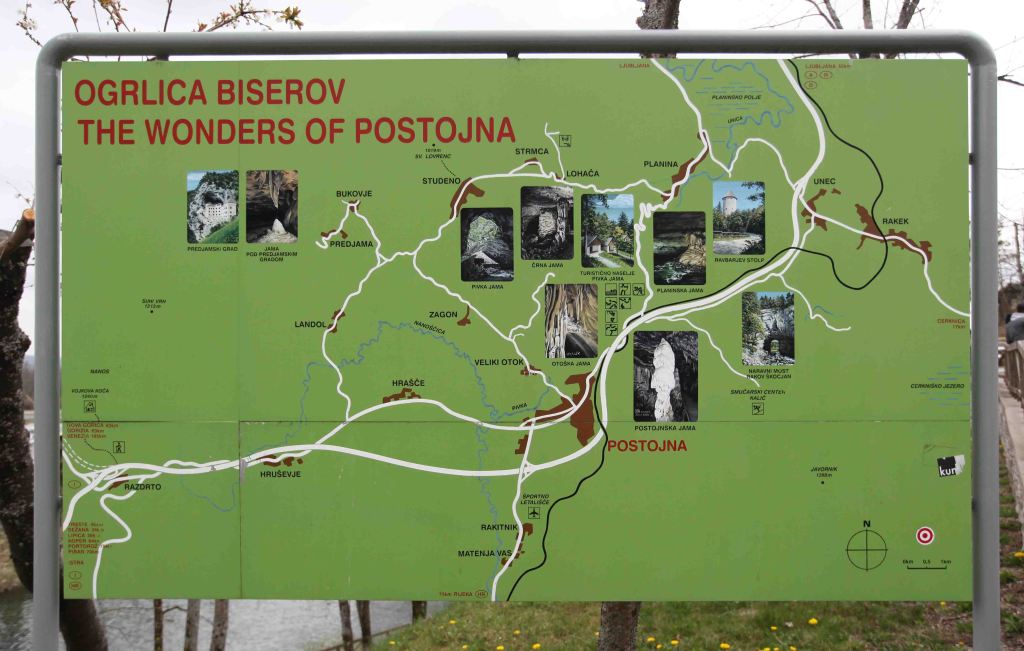 Postojna Cave is only one of many attractions to see in the area.