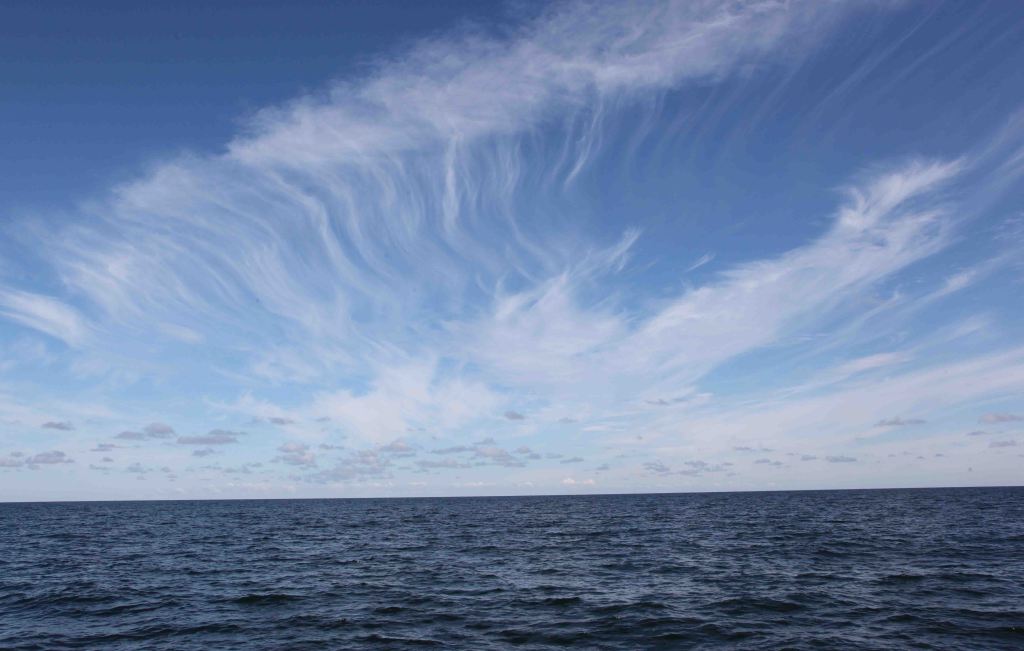 We sailed to the north coast of Germany this year and stayed in some of the most popular holiday centres of the German Democratic Republic.

We passed the long, narrow island Hiddensee on our way to Stralsund, the first stop. 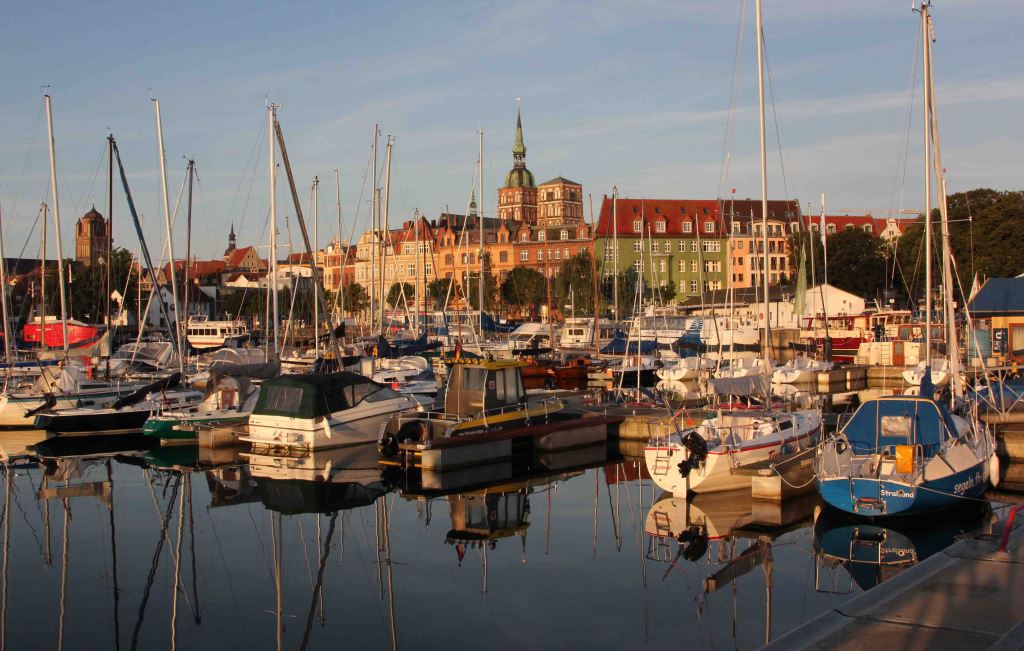 The Stralsund marina is just a few minutes walk to the center of the Old Town.

Stralsund was a member of the Hanseatic League, a 13-17th C trade group. This sculpture is a symbol of the league.
See http://en.wikipedia.org/wiki/Hanseatic_League. 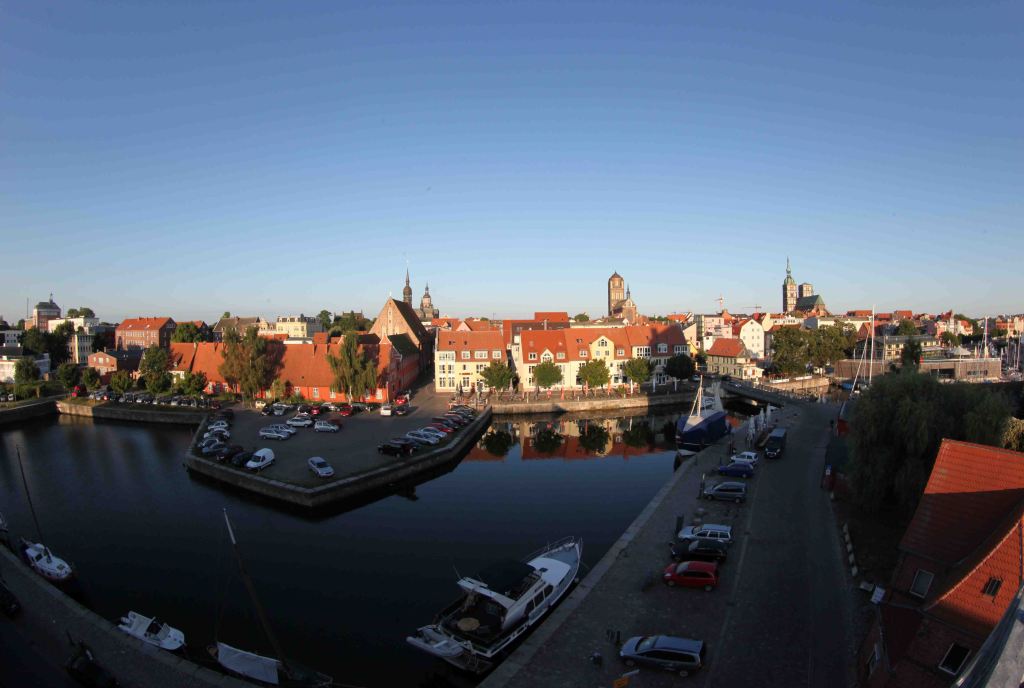 Stralsund is an old city, and the canals or moats are reminders of the past.
Many of the bridges rotate or lift to allow boats to pass in and out of the canals.

The Market Square in the Old Town.

This part of Germany once belonged to Sweden. One reminder is the coat of arms on the gable of the building that was the
headquarters of the Swedish garrison commander. The Swedish lion is on the left and the Pomeranian griffin on the right.

There is a square hole in the Market Square that springs to life every now and then.

The children enjoy playing in this fountain, but sometimes it shoots up and surprises them.

Stralsund was heavily damaged during WW II. Only the facade remains of the Town Hall, built in the 13th C.

One can see how the facade is secured with large iron bars. 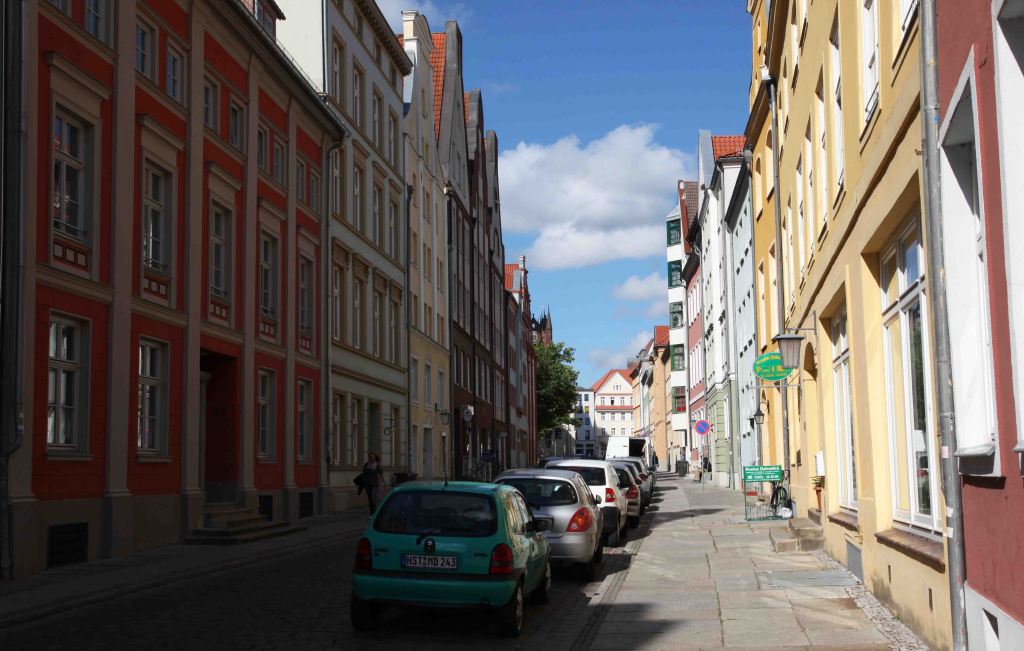 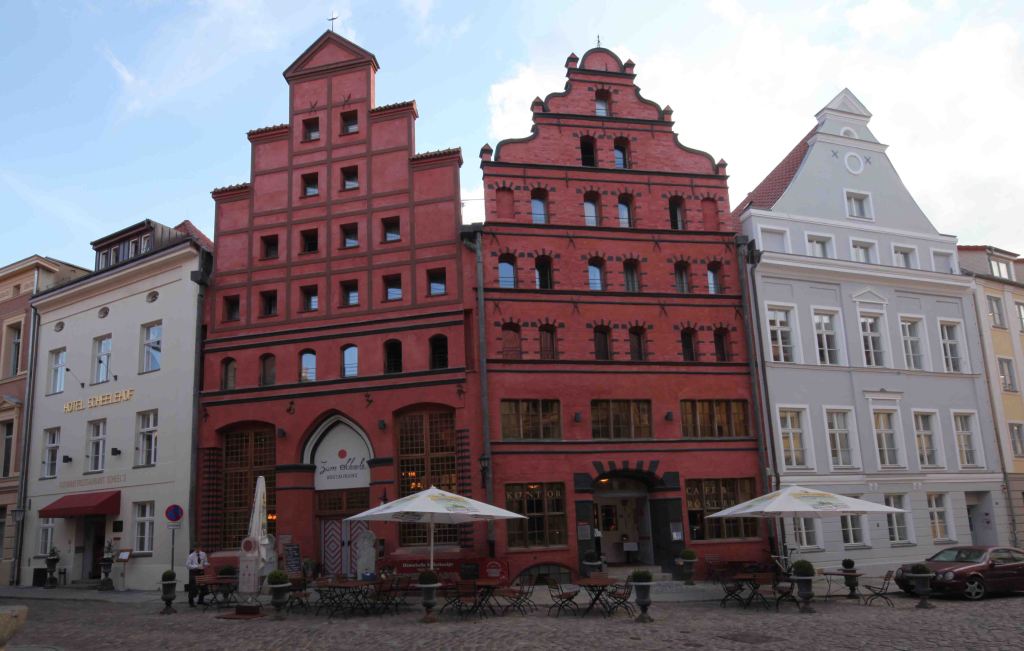 Another reminder of old ties between Germany and Sweden is this house, where the scientist Carl
Wilhelm Scheele was born in 1742. He moved to Sweden at the age of 15, to study to become a pharmacist.
He was the first to discover oxygen, and to identify molybdenum, tungsten, barium, hydrogen and chlorine.

Many buildings have been built since the war, but there are also some that are very old, like this building to the right from 1764.

Even though many buildings are new, they follow the architectural styles of their surroundings.

Old buildings are maintained, restored and converted to new uses. This old storage building is being divided into residential flats.

The three masted barque Gorch Foch, built in 1933, has its home port in Stralsund. It lies close to the Ozeanum, the white
building in the back, a new landmark in the city with excellent aquariums and exhibitions of the ocean and marine life.

View from Ozeanum. The new Rügen Bridge (2007) stretches over the line of sailboats that have passed
Rügendamm a draw bridge from 1936 that still carries the railway to Rügen and local traffic to Dänholm island. 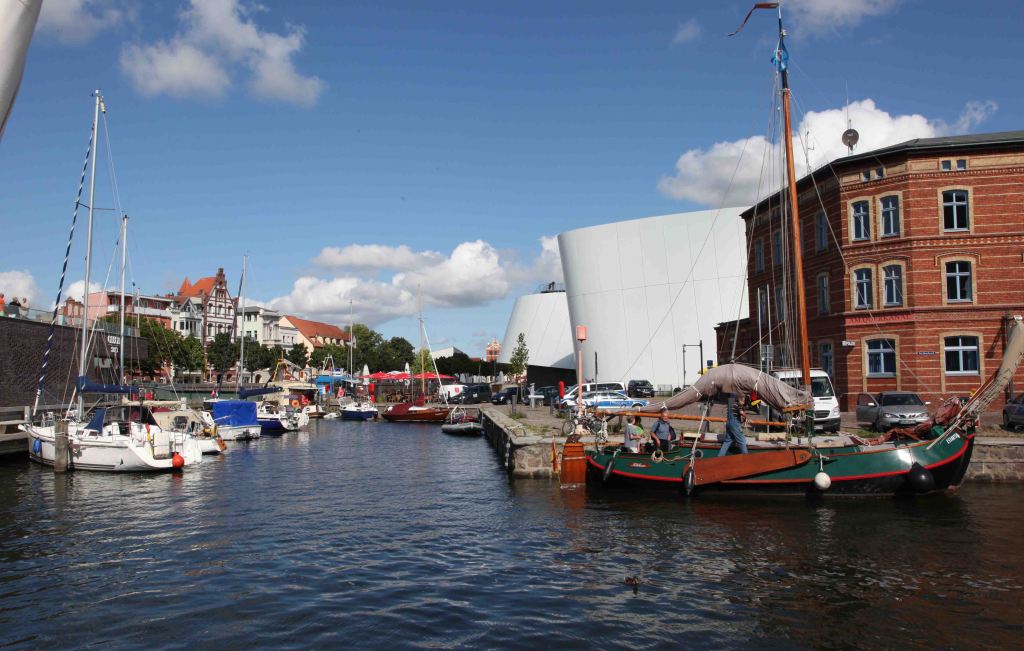 Apart from the marina, boats can moor in the canals 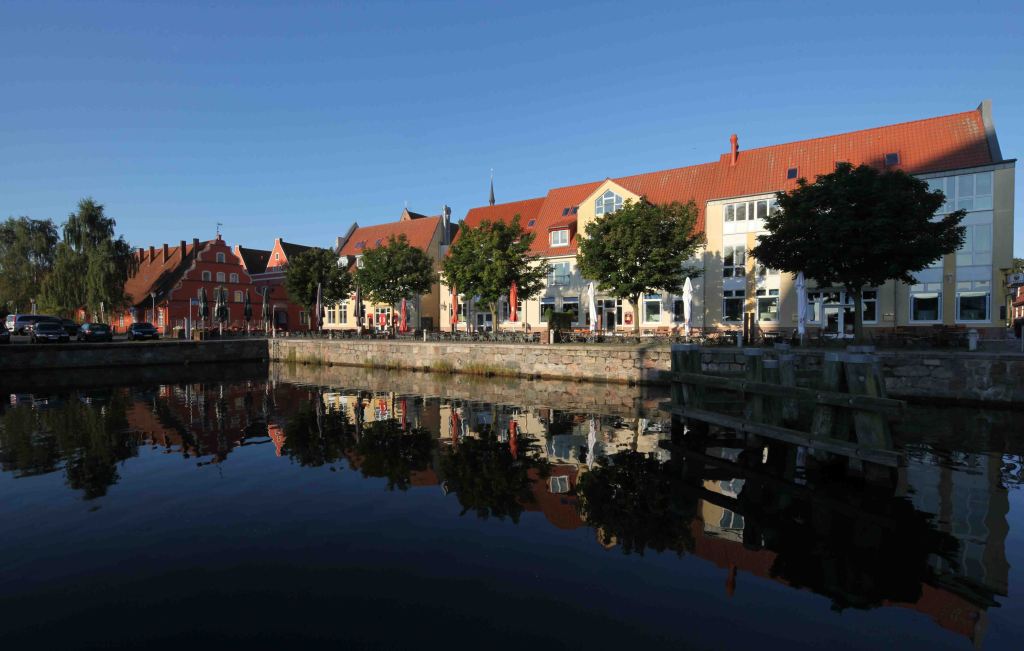 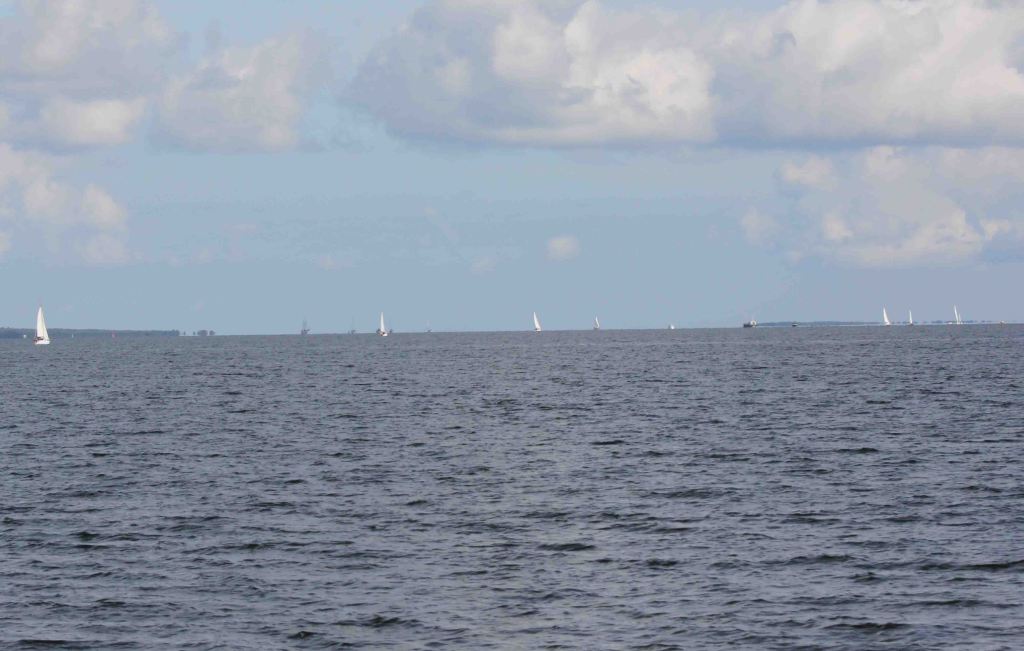 Many people take use the own boats to Hiddensee, but one has to be careful as there are many very shallow areas. 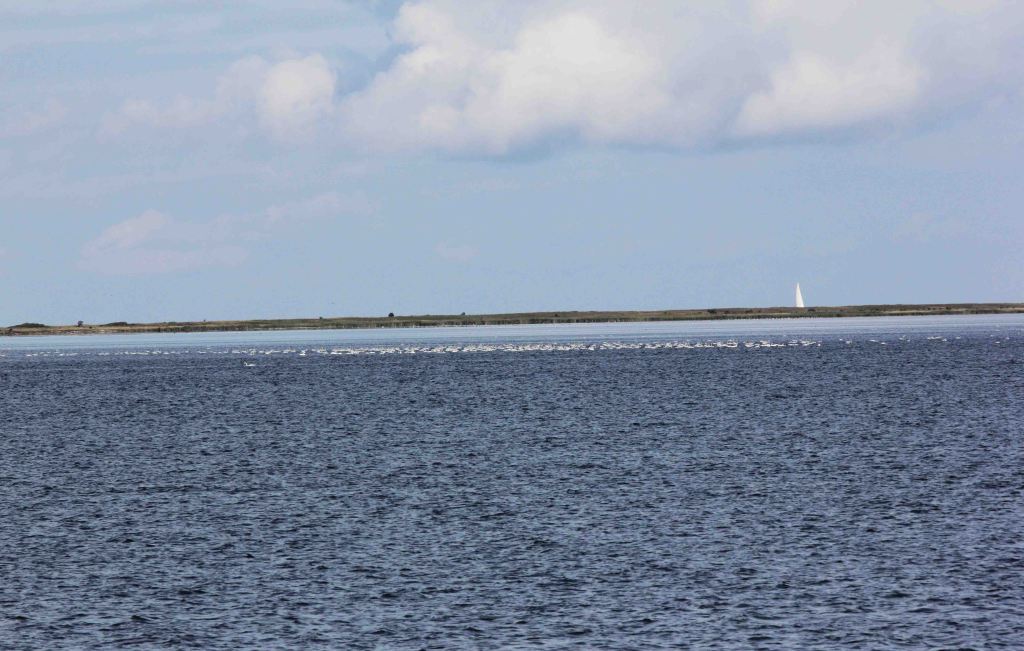 Hiddensee is mainly a natural reserve, surrounded by very shallow waters. Birds and fish breed here, and many areas are off limit to visitors.

Most of Hiddensee is very low, just above sea level. There are three settlements with ports, all with low buildings.

Many visitors enjoy the sandy beaches in the summer.

There are regular ferries from Stralsund, arriving here at Neuendorf, the first stop. 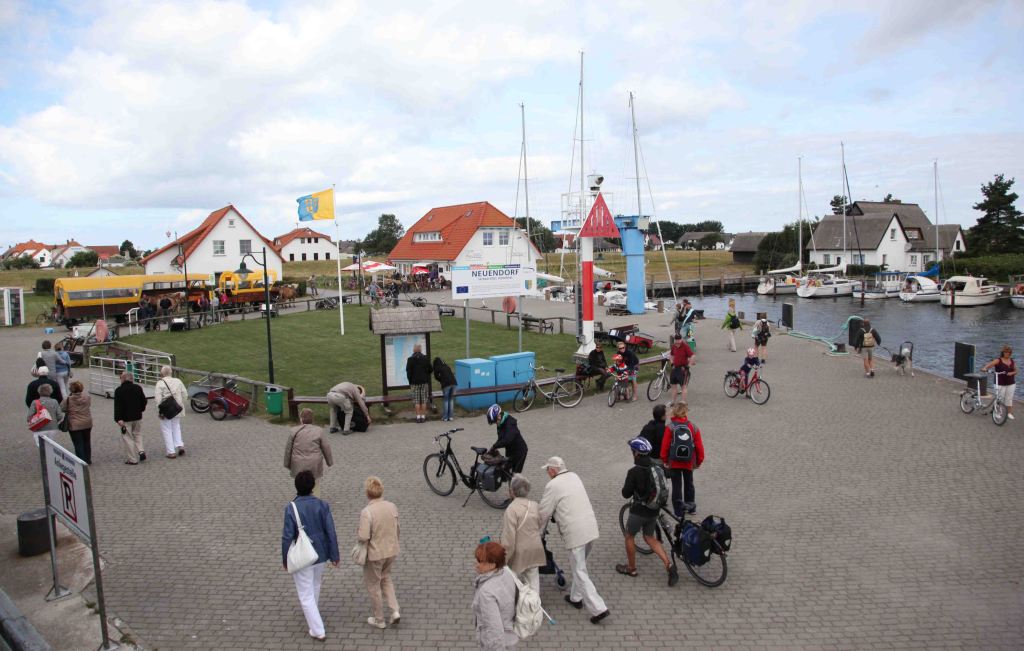 Most passengers disembarked at Neuendorf, including some 50 bicyclists. One can rent bicycles or ride a horse-drawn cart.

The second port is Vitte with lots of small restaurants along the water.

Vitte has a small marina for private boats. 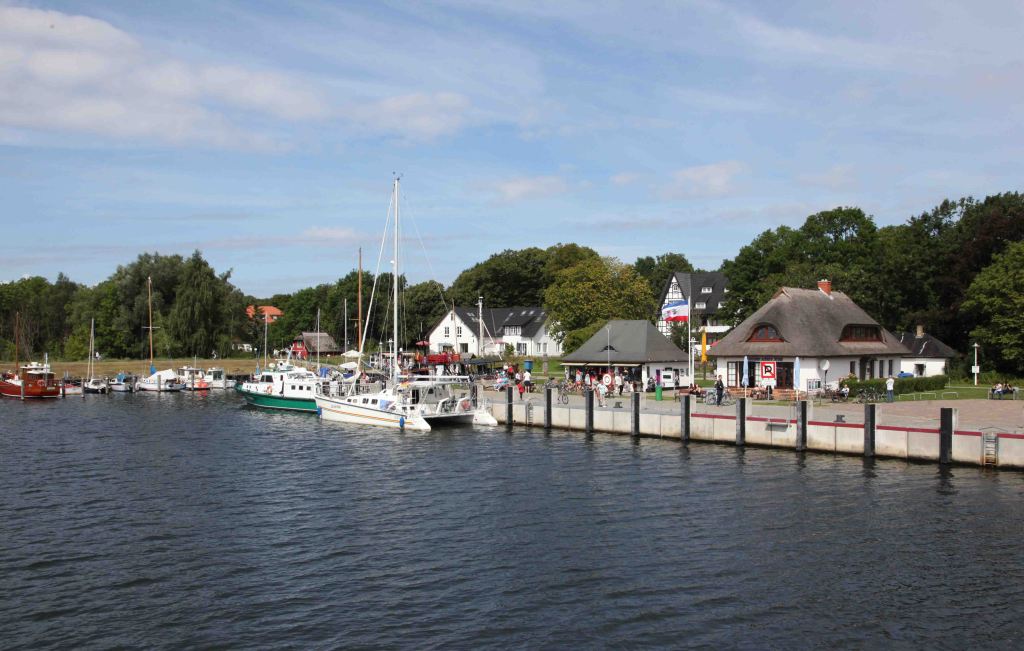 The third and last port is Kloster, where we stepped off.

There are no motor vehicles on Hiddensee, but there are many horses.

Horse-drawn  wagons were common, and there are paved roads like these suitable also for biking and walking.

Bikes are used a lot, and there are several bike rental places. This is a bike parking area before climbing to the Dornbusch Lighthouse at the northern tip of the island. 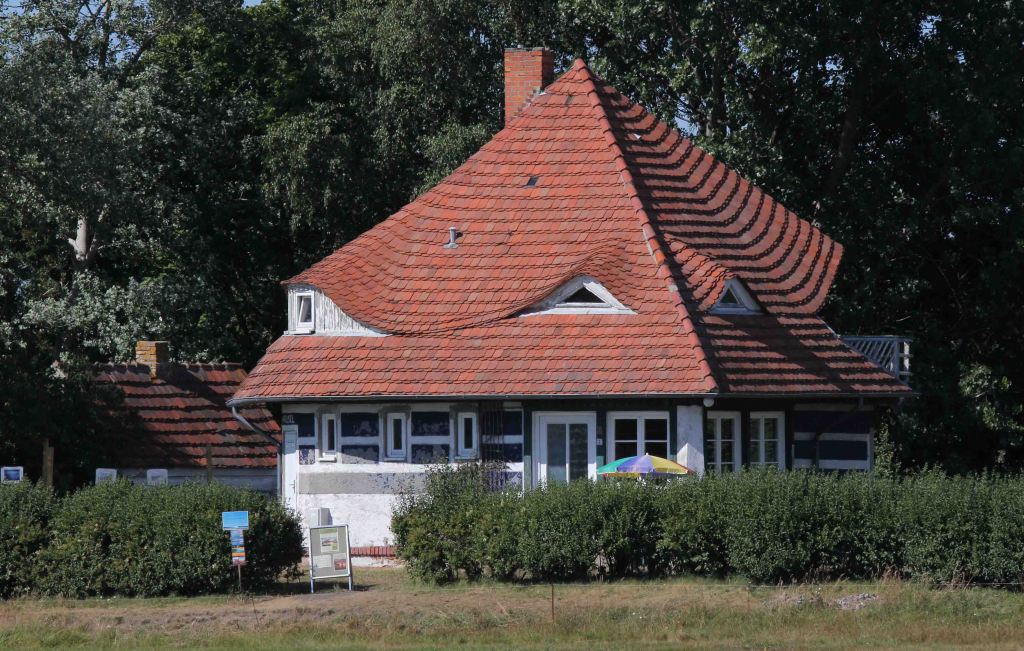 Many houses have thatched roofs, but there are also tiled roofs like this. 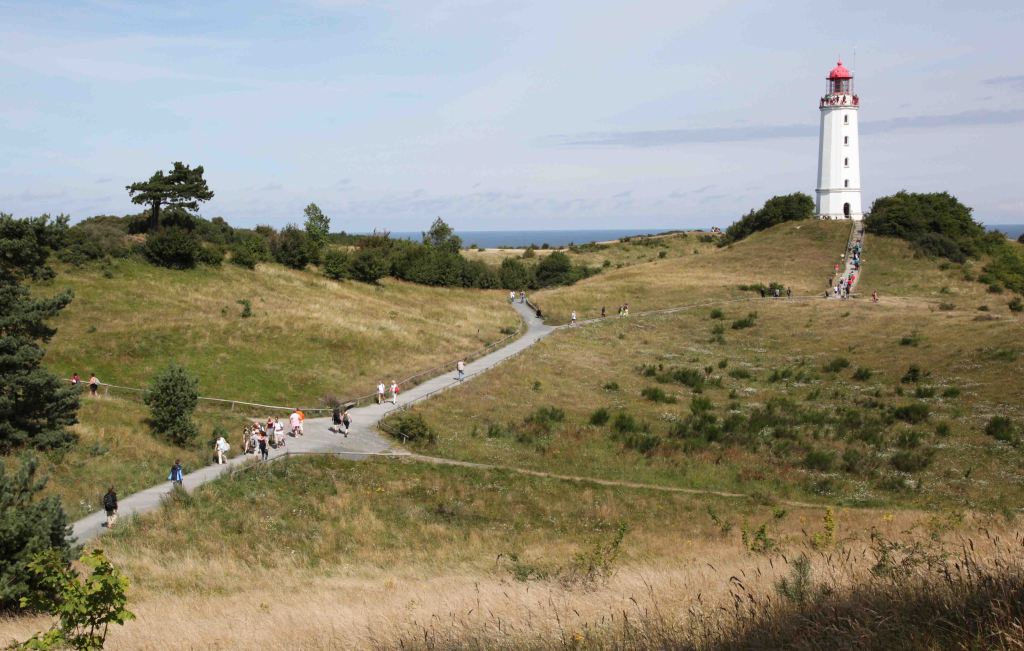 Dornbusch Lighthouse is open to visitors, and the landing gives very good views of Hiddensee.

View from the light house towards Stralsund in the south.

View towards Sweden, in the north. 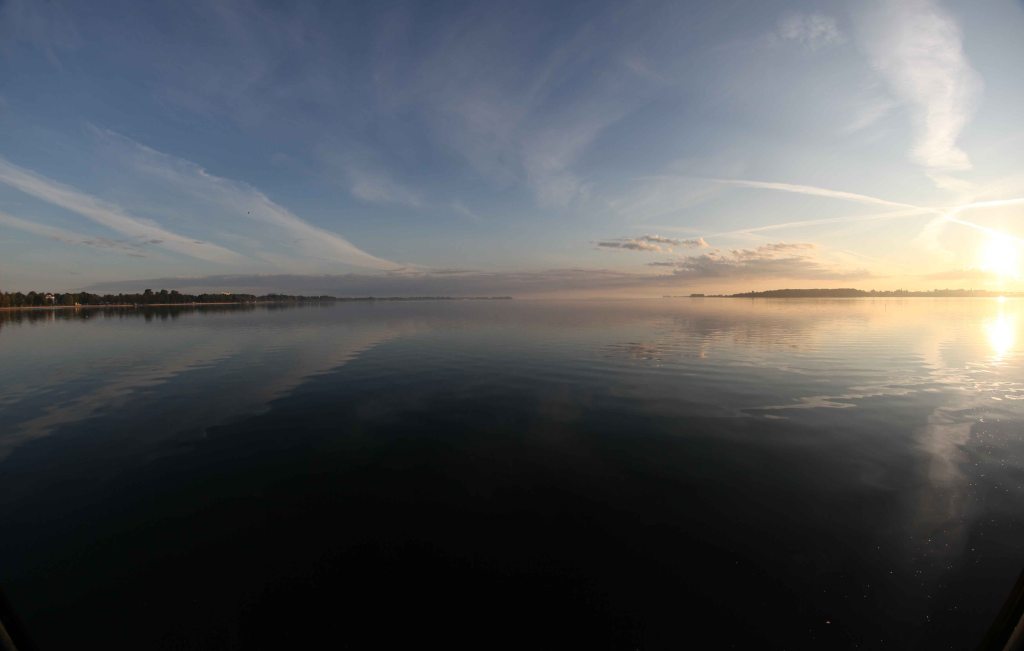 View towards Hiddensee (right side), as seen from Stralsund