Swedish reconstruction assistance to Bosnia and Herzegovina was large. One part of the assistance was
to help internally displaced persons to return home. Of the about 2 billion SEK in assistance until 2005,
around 1,2 billion was for Integrated Area Programmes. Beneficiaries received building materials to
rebuild their own homes. Schools and clinics were repaired, and there was job creation. About 17,000 homes,
more than 20 schools, 15 clinics and 35 water and electrical networks were restored through the program.
Sida financed four organizations as implementing partners: Cross Roads International (CRI) (name used by
Swedish PMU Interlife), the Swedish Rescue Services Agency (SRSA), Caritas and the Salvation Army. Some of
these pictures are not sharp as they were taken with a Kodac DC40 camera with an original image size of 0,09 Mb!

About 400,000 homes were destroyed during the war, and around half of the 4,5 million prewar population
in BiH had to leave their homes because of the war. Approximately half of those displaced became refugees
in other countries. Picture from Hambarine, near Prijedor, 1999. 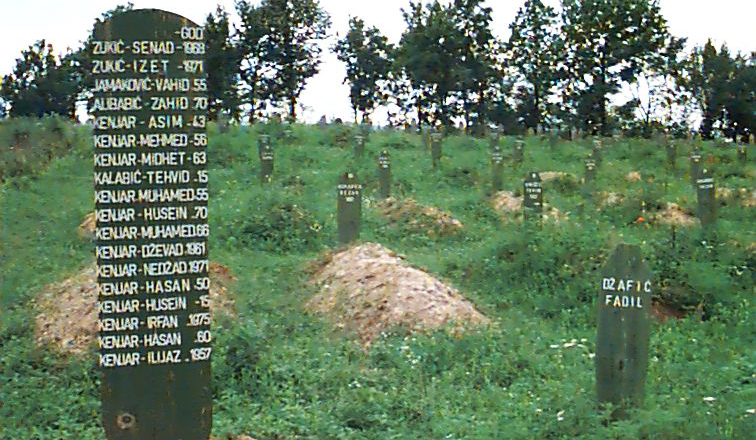 Many were killed. This is from a cemetery near Sanski Most. (photo taken with a Kodac DC 40 camera).

It could sometimes be very challenging to move forward with projects, due to local political resistance,
which reduced as time passed. This picture shows a traffic light in Tuzla, taken in 1998, a symbol for
how it sometimes felt when working with the reconstruction.

Despite challenges there were many achievements. All houses in this picture, from a village north of Zavidovici,
were reconstructed with Swedish assistance implemented by the Swedish Rescue Services Agency, SRSA. 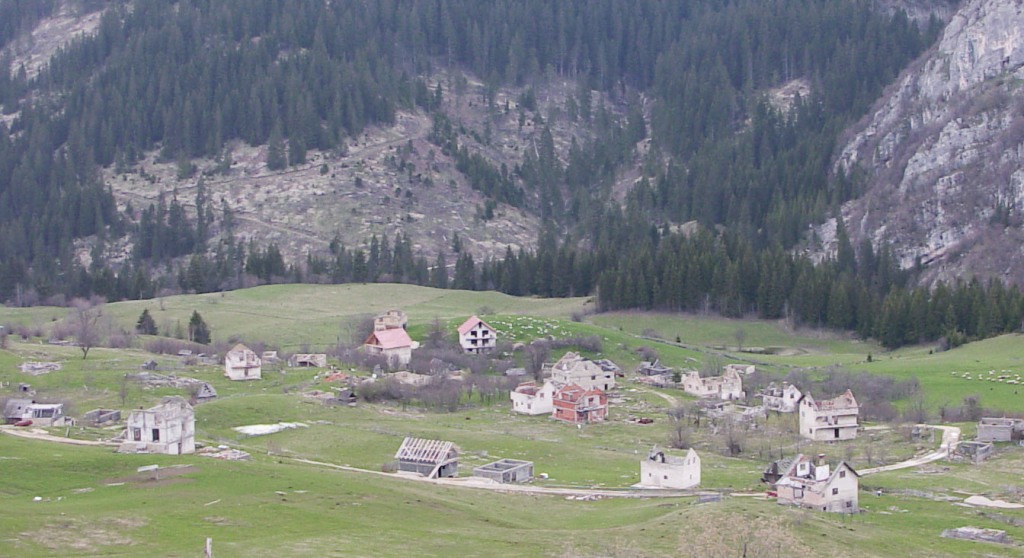 A small village on the Vlasic mountain where Bosnian Serbs used to live. The picture was
taken on 28 April 1999 when reconstruction had just started – the two roofs in the back.

The same village in November 2001. All buildings with roofs were financed by Sweden, implemented by Cross Roads International/PMU Interlife (CRI).

A Bosnian-Serb family returning to their home in the village, on Federation territory.

This is Hambarine outside Prijedor, in April 1998. 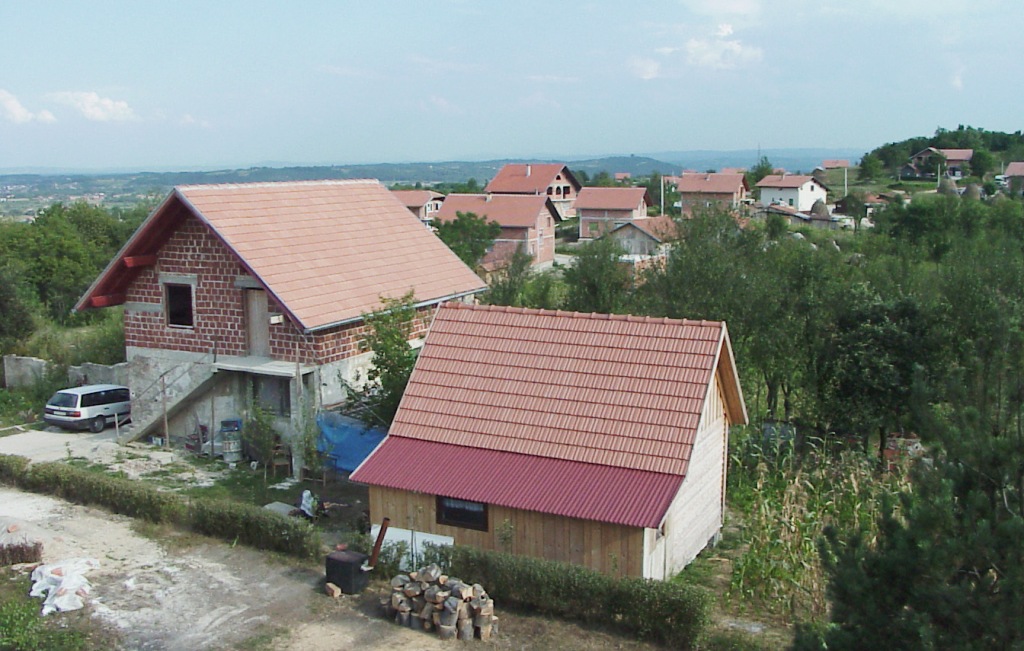 The same place in August 2001. The Lutheran World Federation (LWF) implemented
several reconstruction projects in the Prijedor – Sanski Most area, as well as around Tuzla. 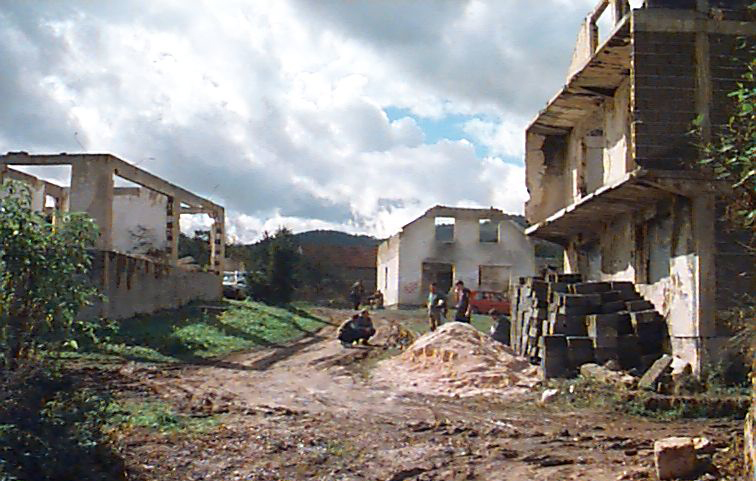 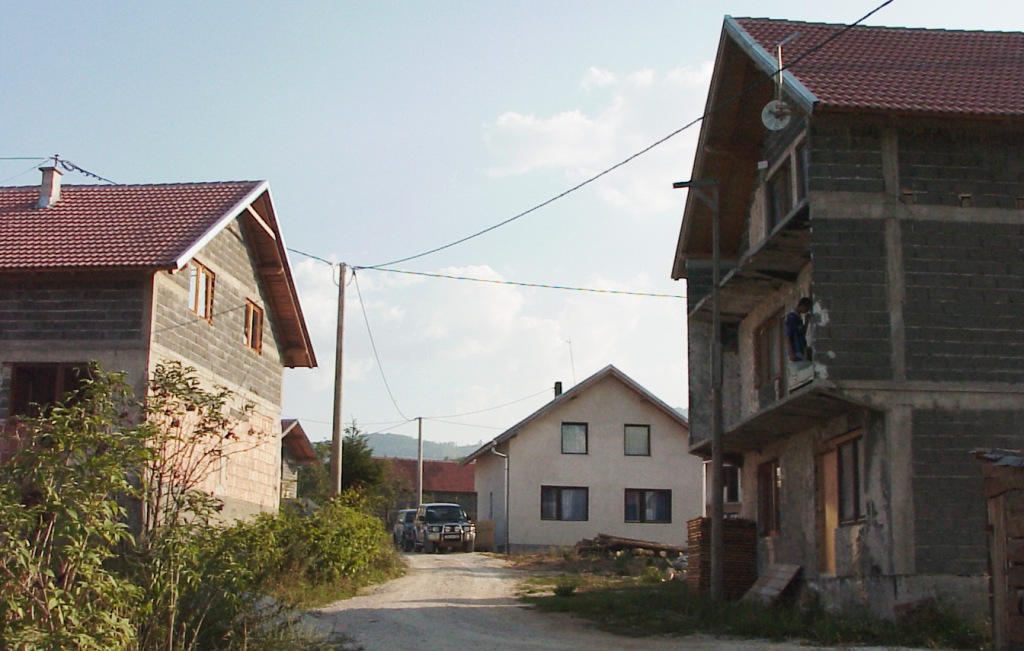 The same place as the previous picture, but from August 2000. 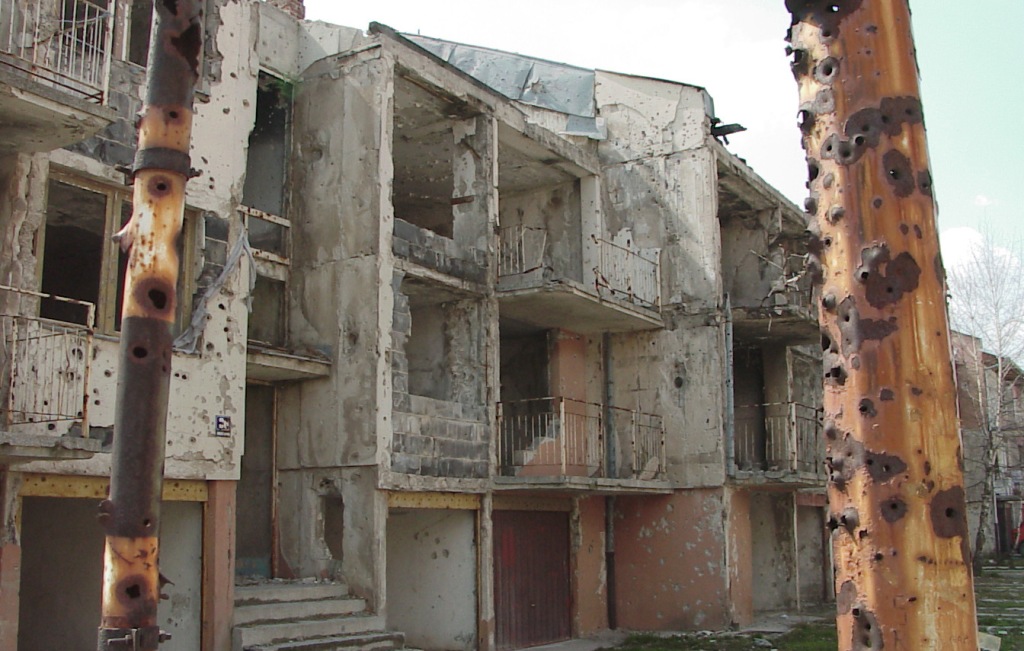 It is difficult to understand how such badly damaged buildings can be reconstructed. This is from flats near the airport in Sarajevo.

Repairs were done only to those flats people returned to. 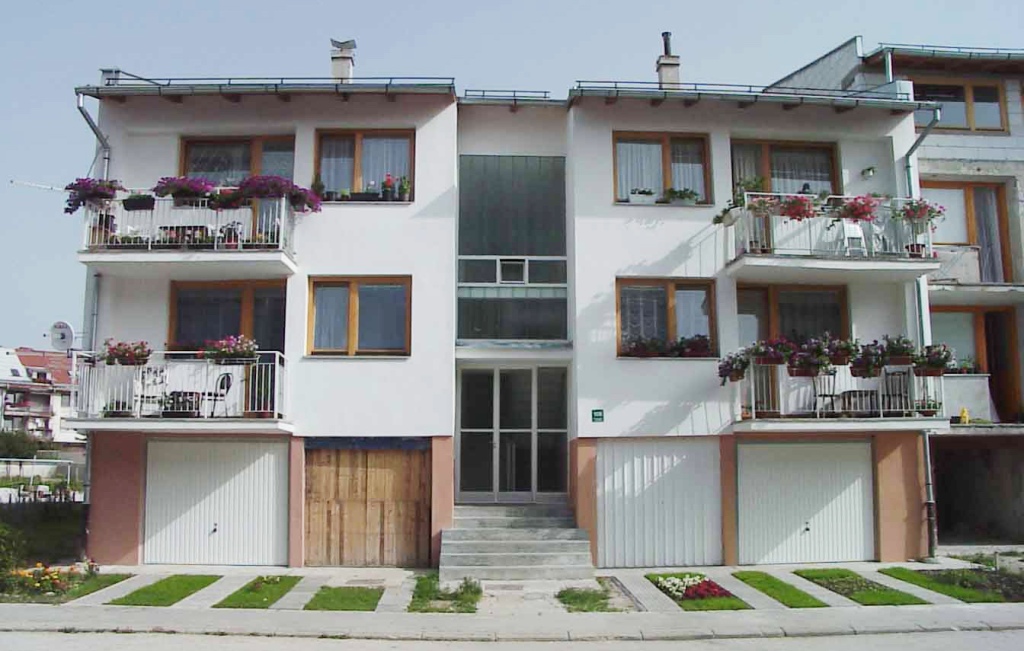 The flats after reconstruction when a Bosnian-Croat family returned. Caritas reconstructed many flats in
Sarajevo through self-help. Beneficiaries got the material but had to to the work themselves. Common areas in
apartment blocks were done using contractors: stairs and elevators and main electrical and water installations. 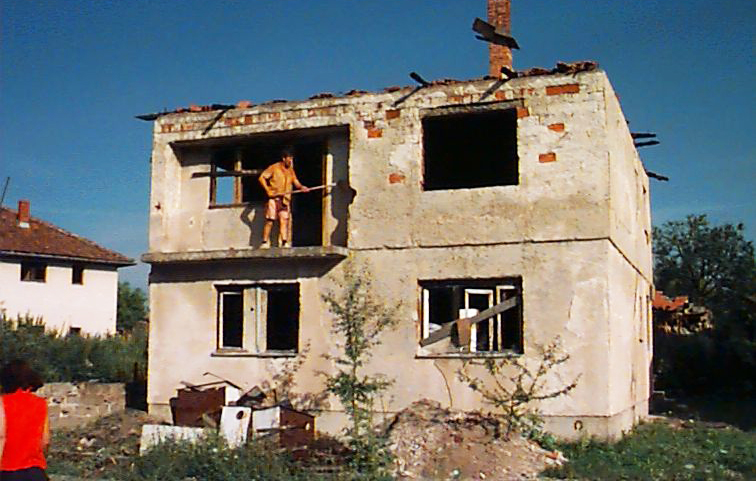 Reconstruction started with the owners cleaning out their houses from rubble. The implementing
organization had engineers make technical specifications and material lists. Selection of beneficiaries
targeted the most needy according to a set list ofcriteria, and agreed between village/local
communities, municipalities, UNHCR and the implementing organization. Work was done village
by village for logistical reasons and for easier control and supervision of works. 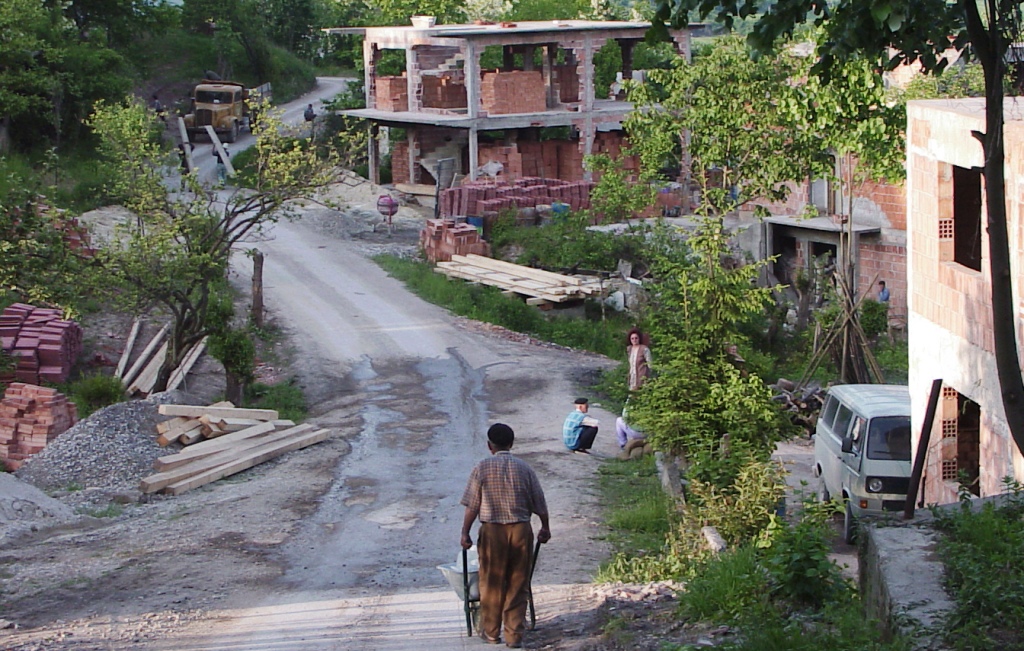 The roofs were often the first item to fix. This picture is from Novi Seher in Maglaj municipality during a
Sida delegation visit. The visitors are, from left, Director for Sida-East, Staffan Herrström,
Sida Director General Bo Göransson, middle, and furthest to the right Roland from CRI.

A school near Zavidovici that was reconstructed by SRSA. SRSA always painted their schools in yellow and blue,
which was not a Swedish policy. More than 20 schools and 15 clinics were reconstructed with Swedish support. 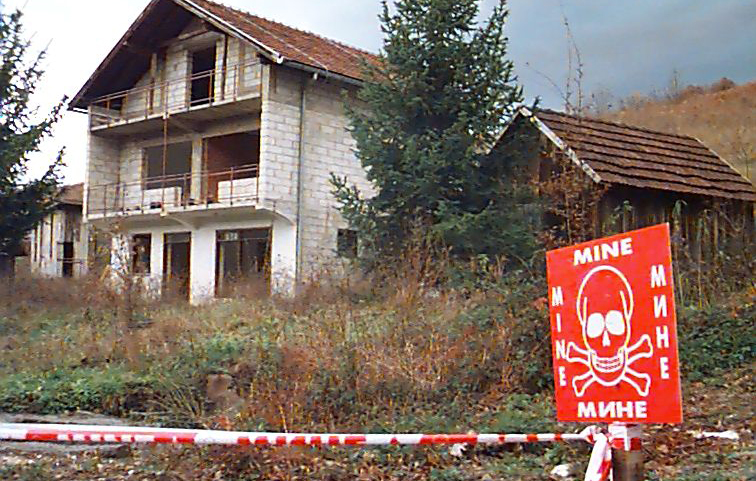 De-mining had to be done for some projects.

This picture is not sharp but, it gives an idea of the spread of mines. There are estimates that mines could remain a problem until 2050.

This picture is from Kosovo. The sign warns about cluster bombs. 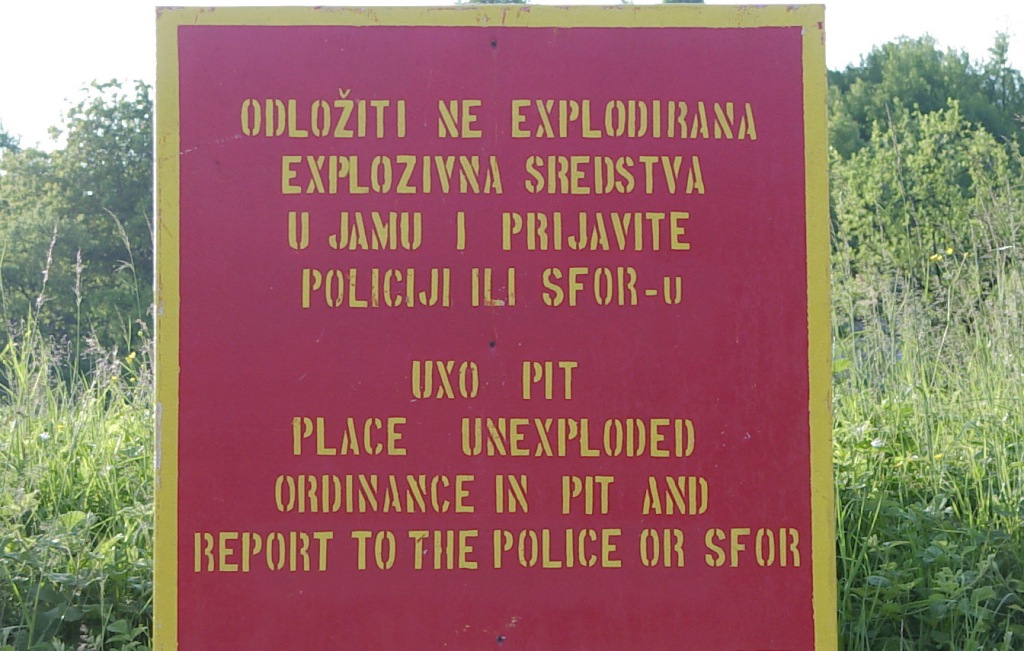 This sign was found in May 1999 in a village near Zvornik where SRSA worked on reconstruction to enable Bosniaks to return to Republika Srpska. 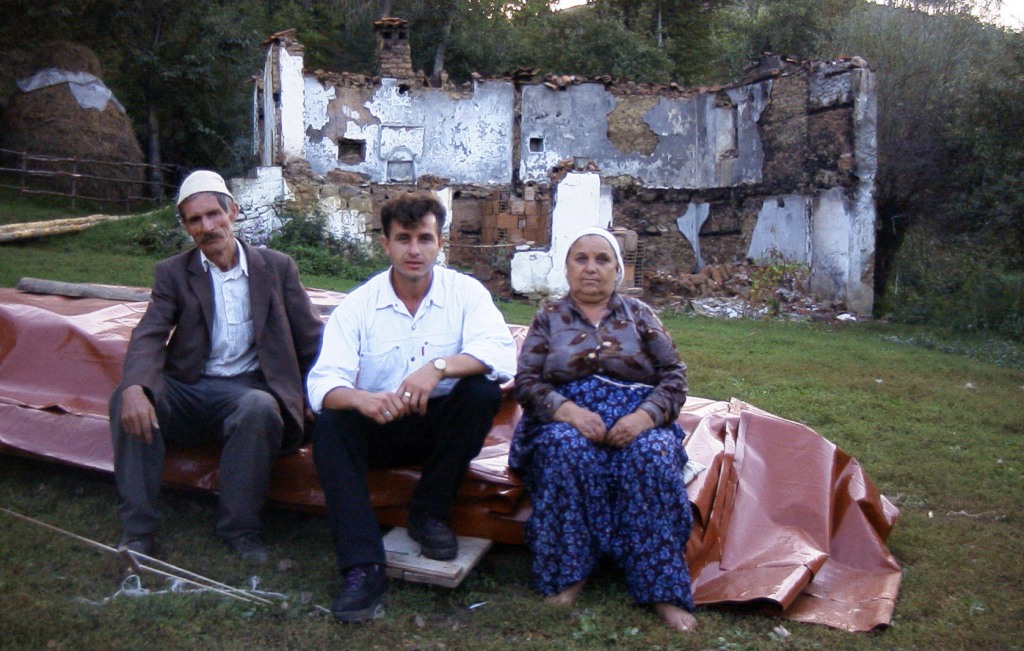 A family in Kosovo who sit on their first delivery of building materials, in front of their
war damaged house. Sweden financed reconstruction of over 2,900 houses in Kosovo. 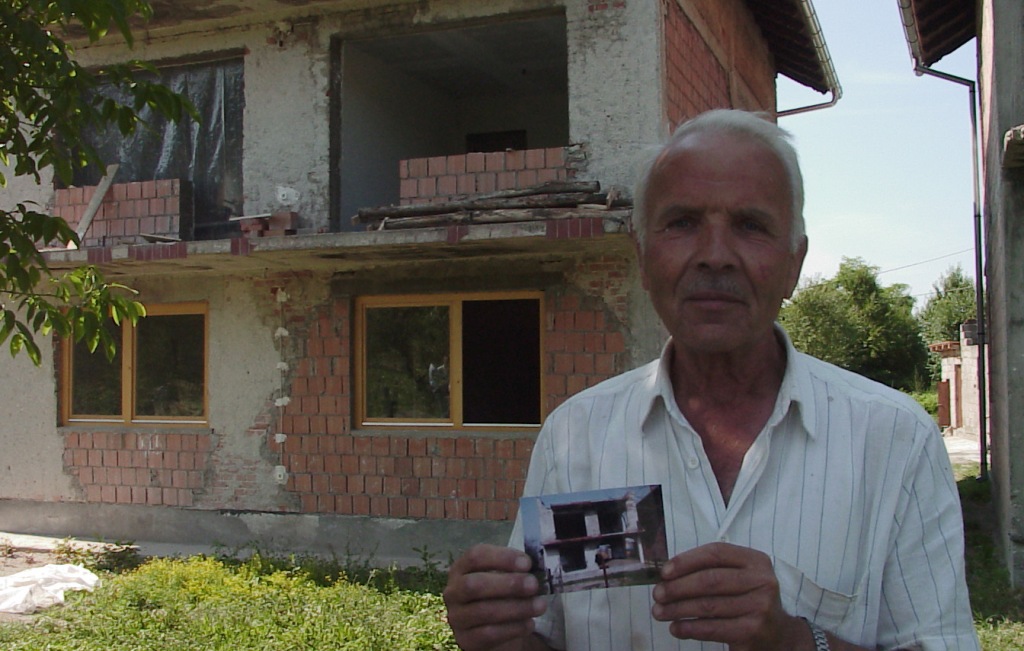 A man in Grapska, near Doboj, showing a picture of his house before reconstruction began.  Several
hundred homes were reconstructed in Grapska with SRSA as the implementing organization. 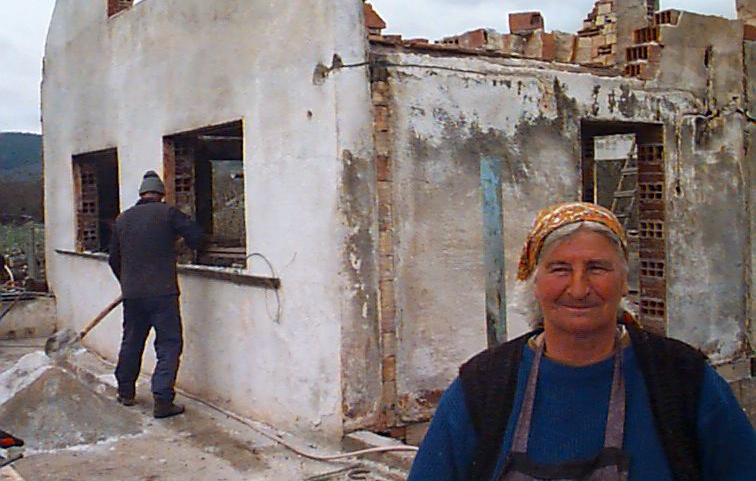 An old woman in Sipovo in front of her house under reconstruction. The Salvation Army
helped many hundred Bosnian-Serb families to return to Sipovo and the surroundings.

This couple are Bosnian-Croats returning to Bugojno, which was a stronghold for Bosniaks. Caritas helped
the couple, who were targeted with rockets and explosives to prevent them from coming back.
It was sometimes extremely difficult for “minorities” to return. This couple never gave up. 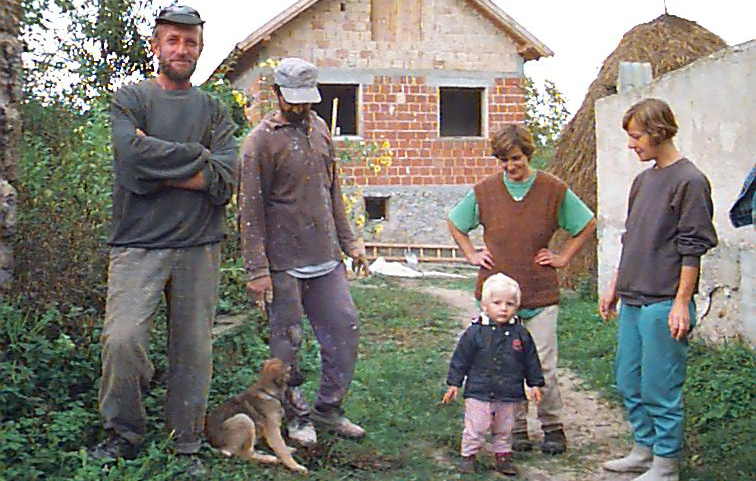 A Bosniak family returning to Republika Srpska, near Sipovo. 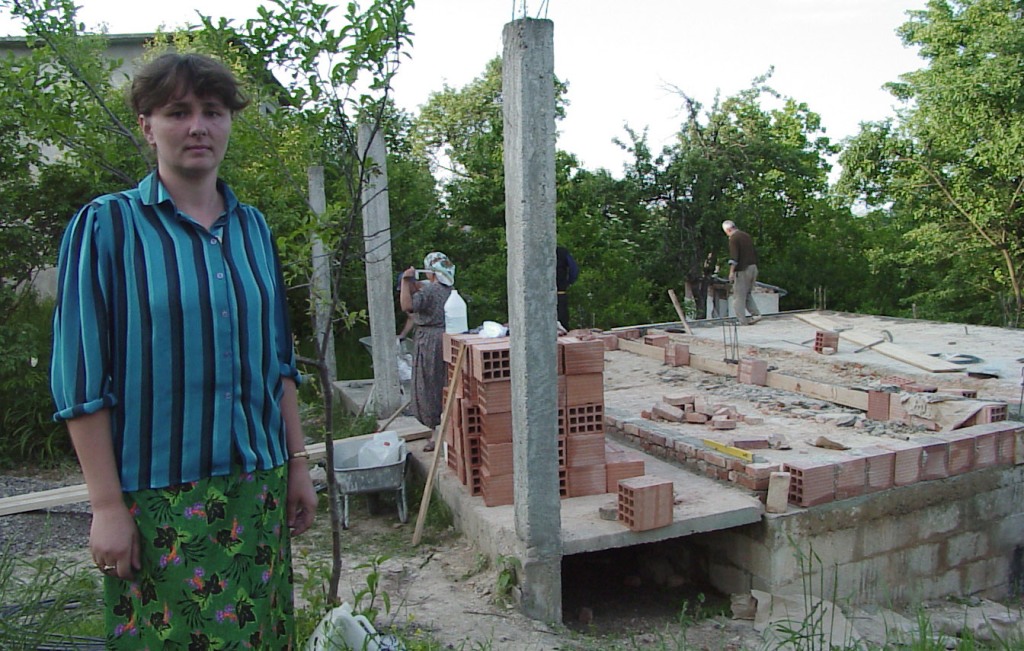 A young widow getting help from friends and relatives to build a new house, as her old home was demolished beyond repair.

A Bosnian-Croat couple who returned to their home between Doboj and Derwenta. They received
reconstruction assistance and agricultural support to start tomato production for income earning.

The couple on the previous picture offered lunch and wanted to show their gratitude
(including flying the Swedish flag). You can see SRSA written in mayonnaise on the sausages
and the word SIDA “written” with their homegrown tomatoes.

Many returnees received support through animals, like sheep. This is a Croatian-Serb returning
to the Lika district, between Split and Zagreb in Croatia. Sweden supported the return of more
than 2,300 families to Lika mainly Croatian-Serbs who had fled to Serbia. 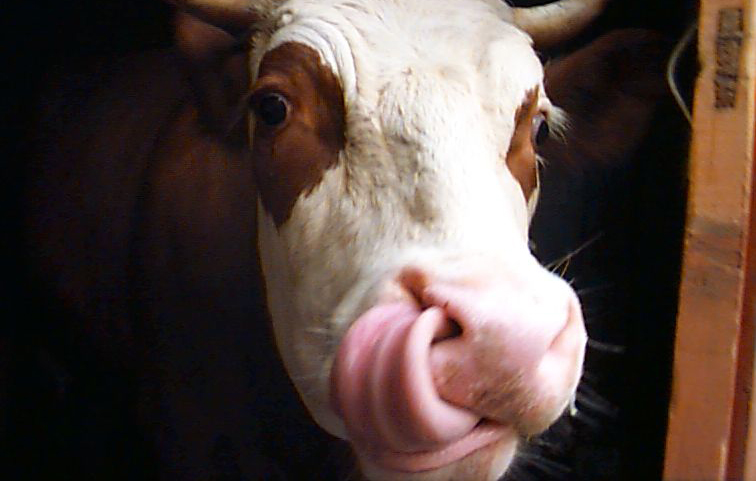 One of more than 500 cows that were distributed to families, along with about 50,000 sheep and 1,300 agricultural machines. 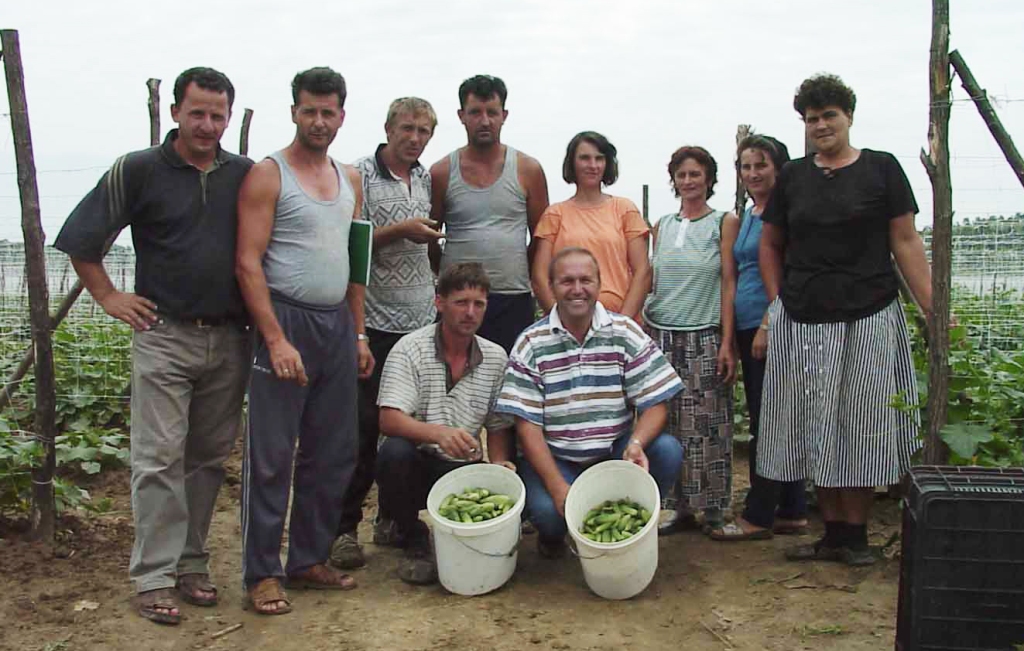 Returnees could start cash-crop production. LWF established contact with companies that
guaranteed to buy the produce, such as cucumbers, at a set price. The companies gave technical
advice and LWF helped with supervision and management. The programme generated
incomes for the returnees who often had no other means to earn money. 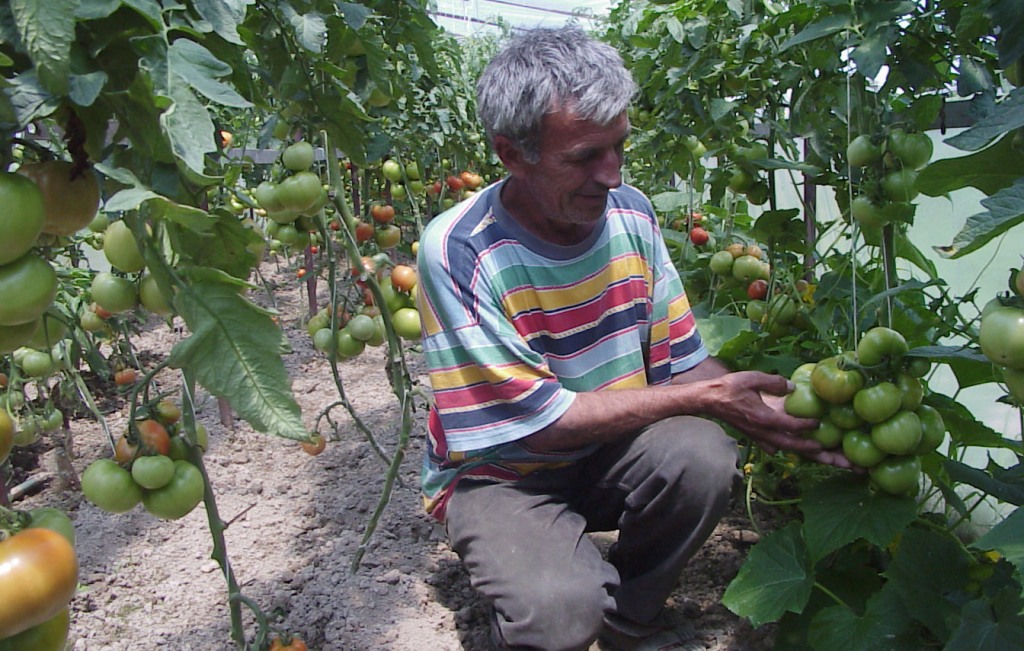 Many got green houses with plastic sheet covering to grow tomatoes, bell peppers or similar crops.
LWF offered all technical assistance they needed and provided seeds.

LWF, with support from Sweden, helped internally displaced who lived in refugee settlements
to grow cash crops. Here are some very proud persons from a refugee settlement near Tuzla who won
a price for their strawberries at a fair in Brcko, to the amazement of local farmers. LWF imported
strawberry plants from Italy that produced these “monster” strawberries. 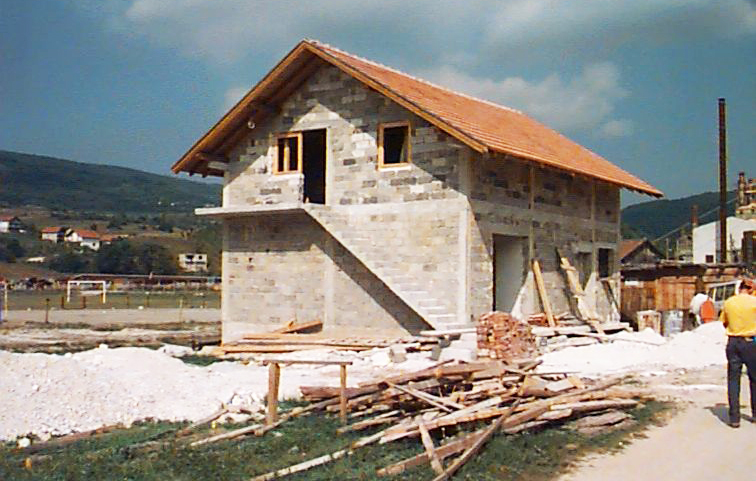 The Salvation Army gave a credit, funded by Sweden, to two brothers who wanted to start milk processing. This is
how the “Mlekara” looked shortly before the yoghurt and milk production started with six employees in September 1997.

The same diary in September 2011, now with 30 people employed. The original building is on the right. 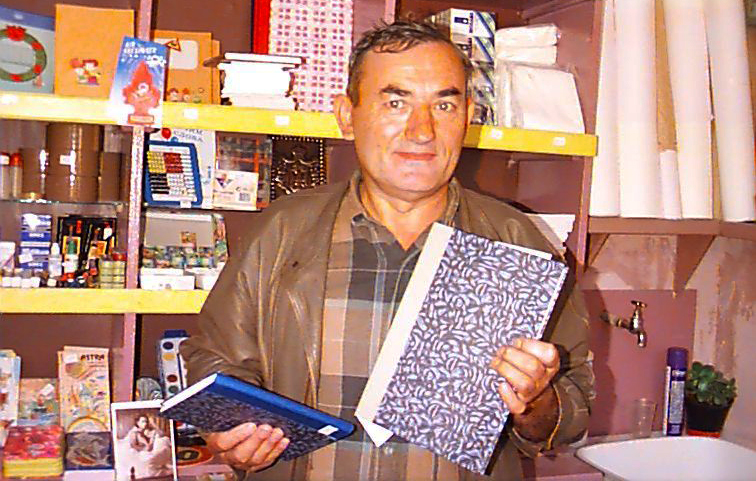 This man, in Sipovo, received a credit to start production of bound note books. More than 20,000 credits
were approved by 2003, and 10,000 new jobs created through Swedish financed micro credits. There was
an even distribution of credits among men and women. Those who got credits were very reliable at repaying
their loans, as it was a way to increase their credit worthiness. Less than 2% of repayments were late.

This is the owner of a small wood-working shop in Sanski Most that received support to expand his business.
He delivered many doors and windows for LWF implemented reconstruction in the Sanski Most – Prijedor area.

A village near Maglaj where all buildings seen in this picture were reconstructed with
Swedish funding. Many internally displaced could move home and leave places they had
occupied, allowing the return of the original owners. Through this chain, Swedish assistance
probably enabled around 100,000 people in Bosnia to return to their own homes.