It shares the entrance with two other attractions. The aquarium is on the right.

There are several larger tanks near the entrance with displays of animals and wildlife along the
Australian coasts. It is dark and the labels are hard to read. It is impossible to take photos without a flash.

Display of Jurassic times, dinosaurs and to the right, a tank with nautilus shells.

A chambered nautilus, Nautilus belauensis. Having survived relatively unchanged for millions of years, they are considered a living fossil.

The only display of jelly fish, the harmless Moon jelly, Aurelia aurata, called common jellyfish or saucer jelly. Australian waters have
lots of jellyfish. Eight of them are well known stingers, including the box jellyfish which can kill a human in a couple of minutes.
The Irukandji, Carukia barnesi, is only about 10 mm in diameter, clear, with one tentacle of about a meter, and extremely dangerous. 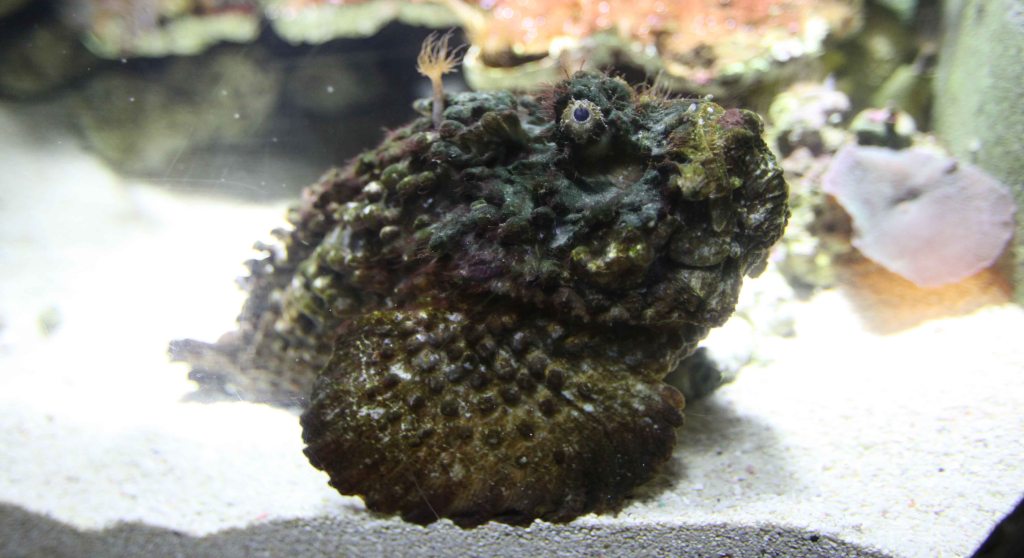 A stone fish, of the family Synanceia, is the most venomous fish in the world. Its dorsal area is lined with 13
sharp and stiff spines and have been known to pierce boot soles. When people step on them they get injured. 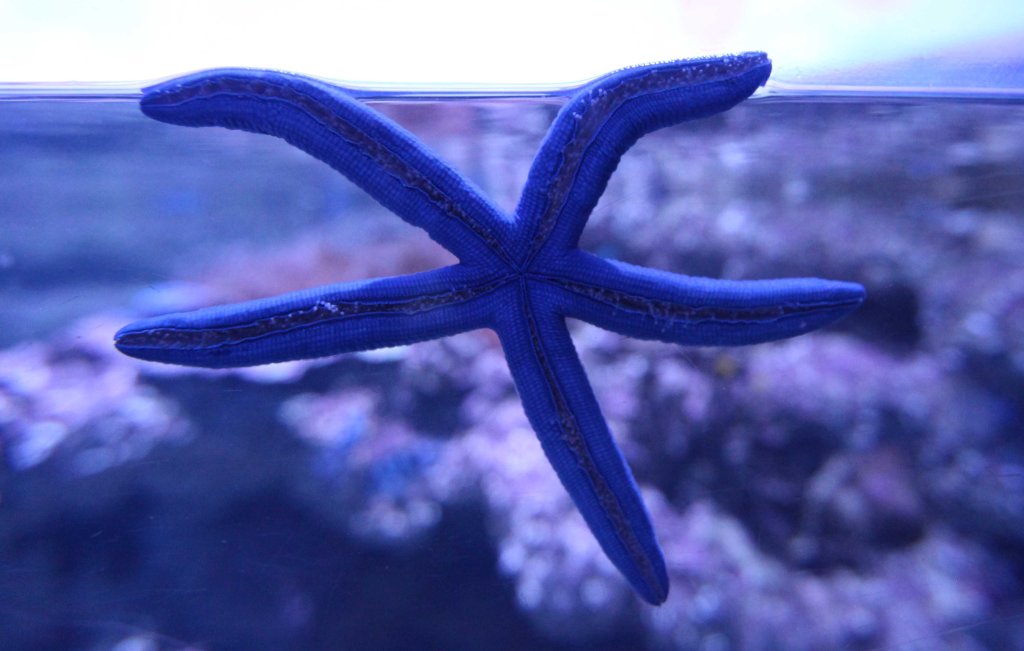 Blue linckia, Linckia laevigata, can become 30 cm large. Is food for some fish and shrimp and sea anemones. 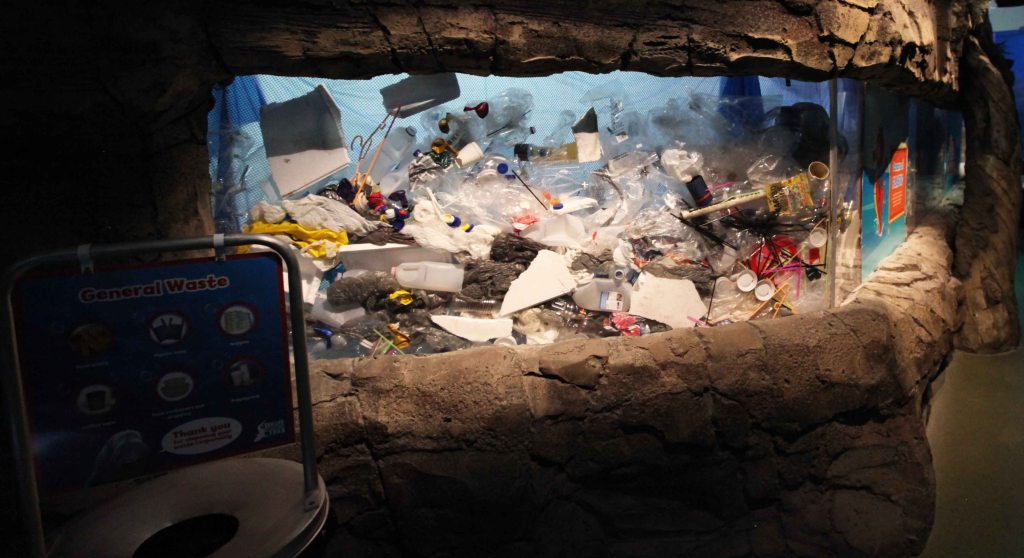 One tank contained garbage found in the sea. The sign to the left shows common waste.

A main display in the aquarium are the two tunnels that run parallel in a very large tank.

The two tunnels can be seen in this picture.

The tank accommodates a large number of small fishes. A diver, to the right, is cleaning the tunnel from algae.

The tank has many larger fish like shark, and here a Eastern Shovelnose ray, Aptychotrema rostrata.

The main attraction are two dugongs, Dugongidae dugong, who are mammals. 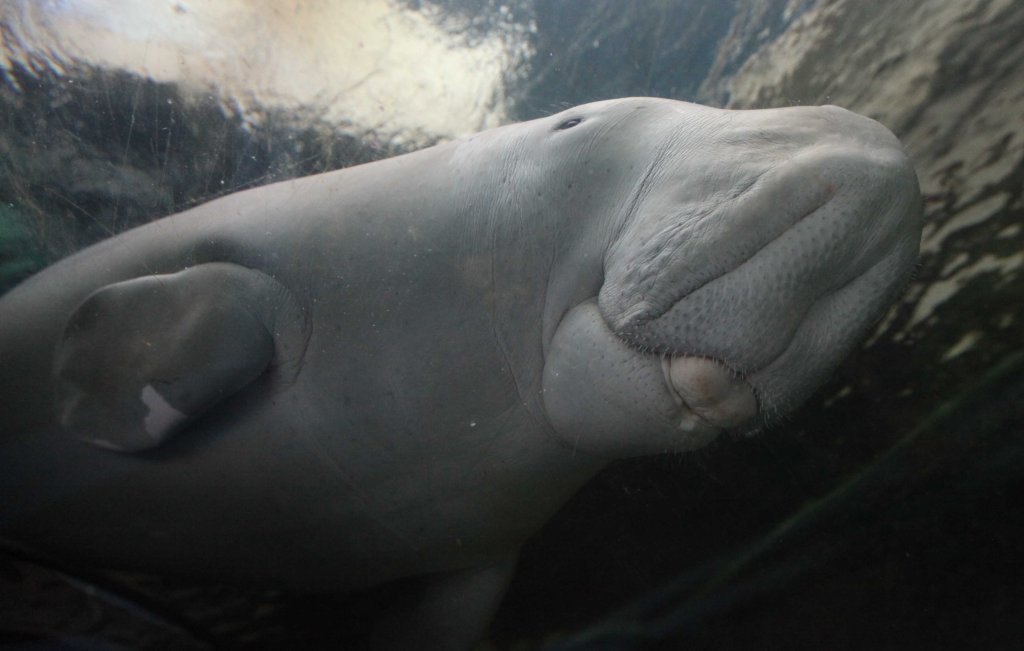 The Dugong is a vegetarian.

The dugongs are fed 60 kg of lettuce per day, fastened on trays that are thrown into the tank.
About 30 — 40 kg of the lettuce is thrown away because the dugongs do not eat soggy lettuce.

There is a special prep room for the lettuce. The menu in the back lists what’s for breakfast, lunch and dinner — just lettuce.

There is a kids section where you can study aquatic life closer — and touch and feel.

This display shows how three tagged sharks have moved along the coast. 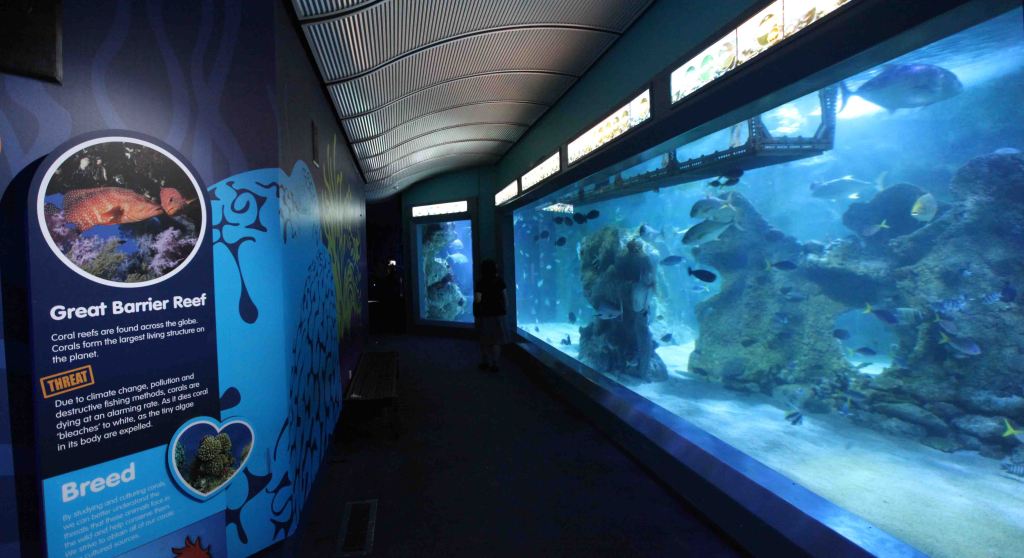 A very large display tank is about the Great Barrier reef.

The tank has large window with seating in front. 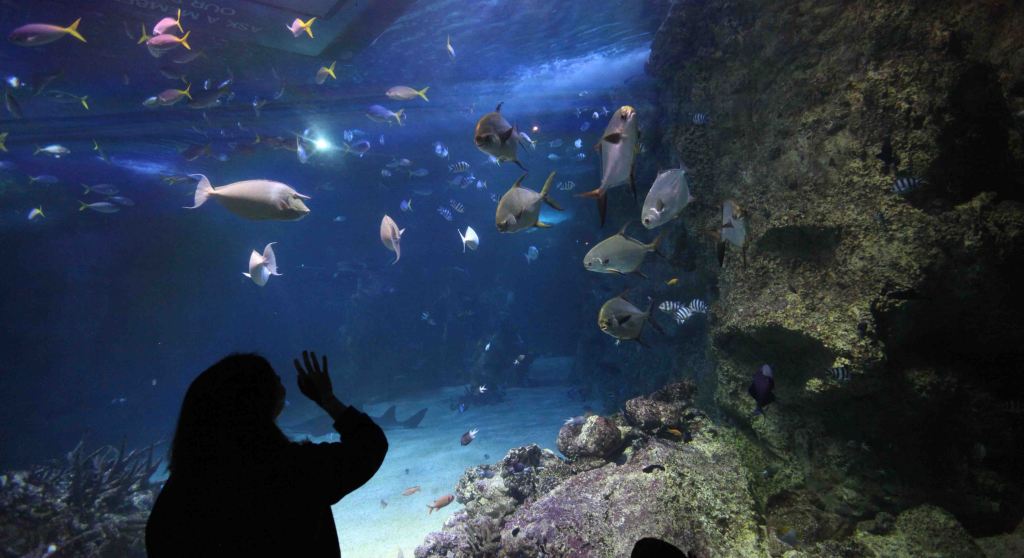 The tank is full of fish that are found around the Great Barrier Reef. 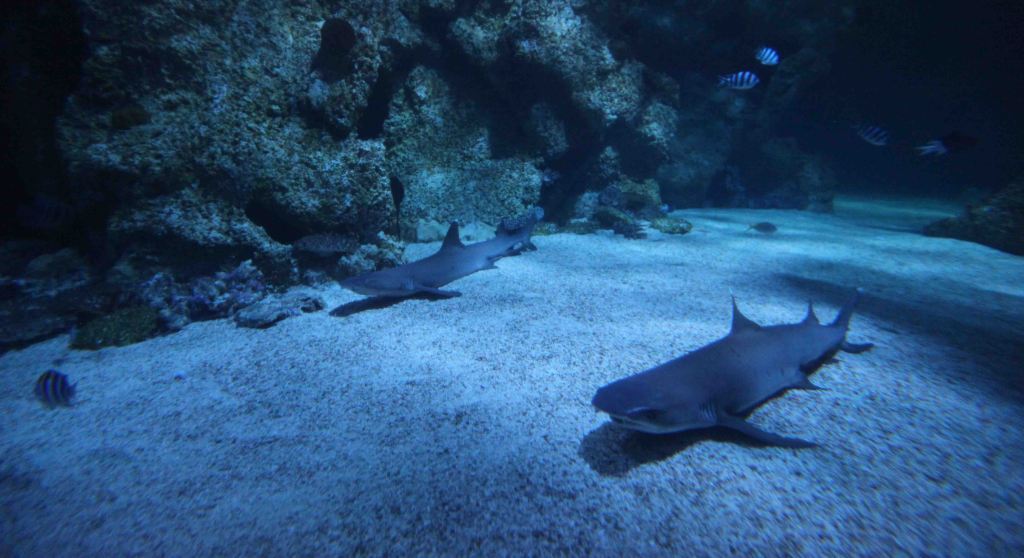 There are several whitetip reef sharks, Triaenodon obeaus. They are nocturnal and the only shark that
can lie still on the bottom or in a cave. Other sharks must move to keep water flowing over their gills. 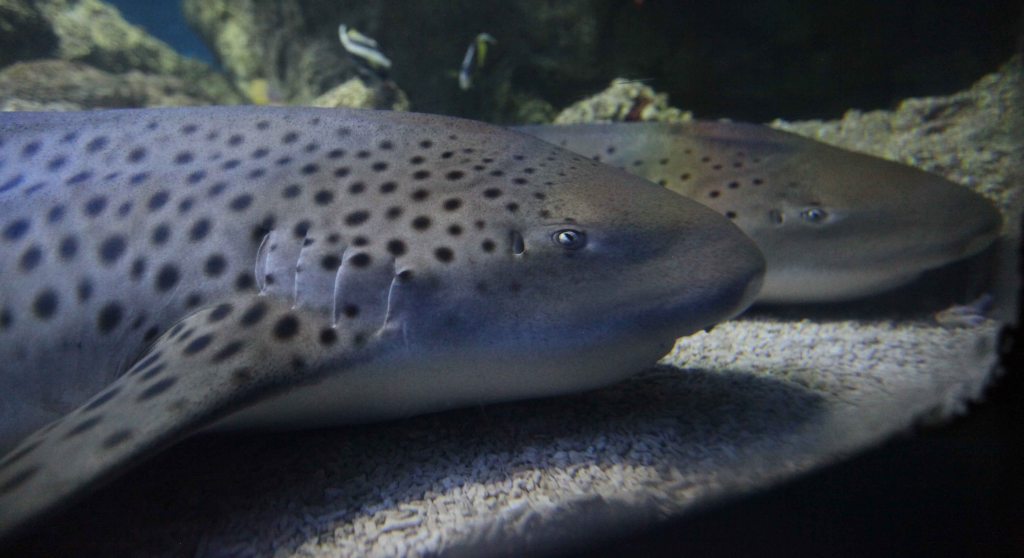 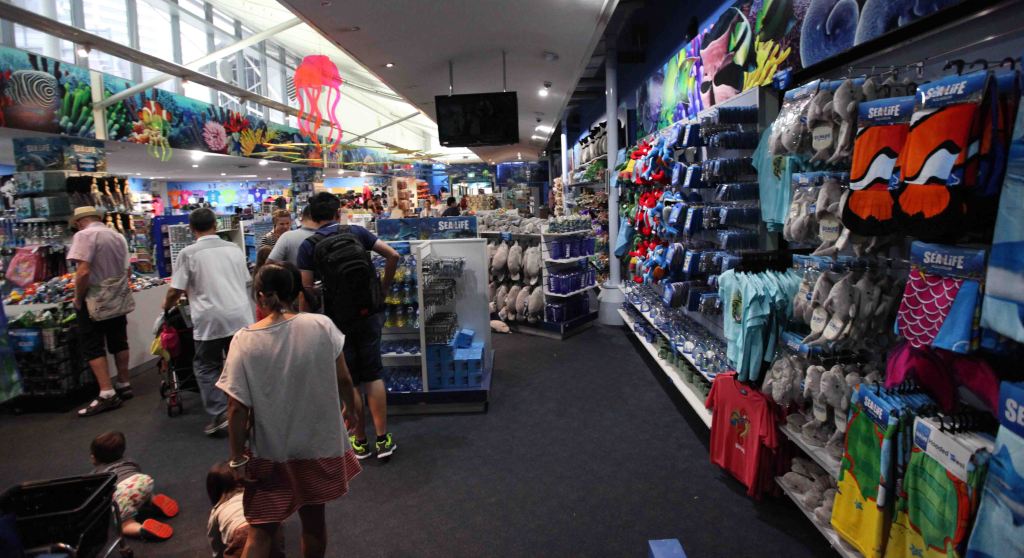 And of course the exit is through the souvenir shop. And the main item in the gift shop is …. 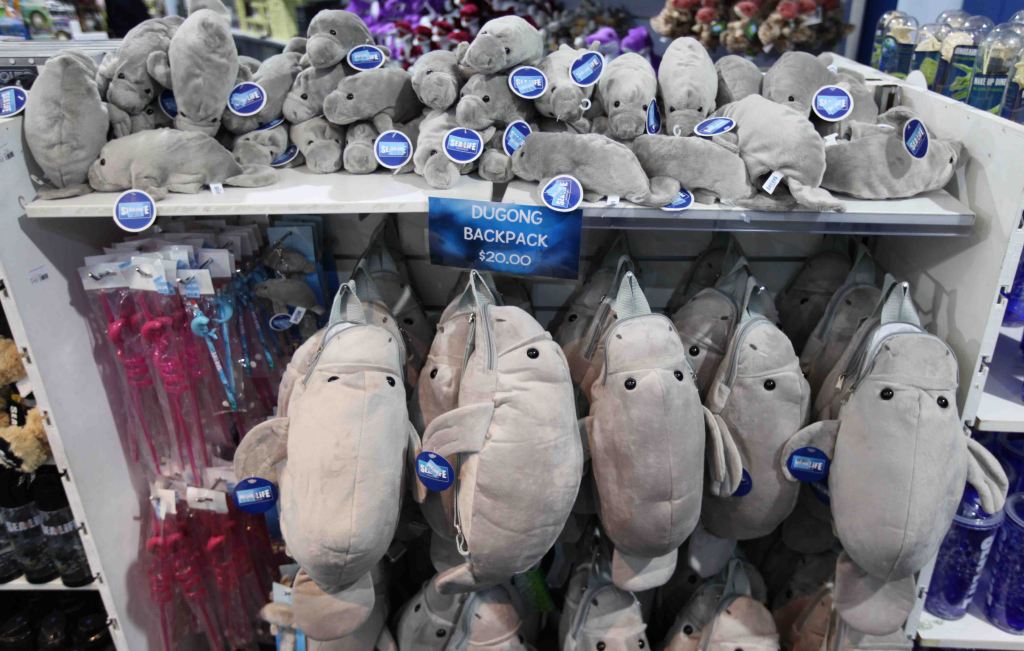 … and some more dugongs!