Our cousin Vernon Chock arranged a day trip to show us Lanai. Annette’s mother did her teaching internship there
in the 1930s. Lanai was known as the pineapple island and the main economic activity was growing pineapples.

The Hawaiian Airlines flight from Honolulu took 25 minutes. We landed at Lanai just in time for sunrise. Vernon arranged to collect a car in the airport parking lot.

There are many Cook Island pine trees, far more than palms. Lanai gets the least rain of all Hawaii islands. The pine trees were planted because the surface area of their needles makes then especially good at condensing moisture from fog. Pure water drips off the branches onto the ground. The trees are also resistent to wind and salt.

Many visit Lanai to go hunting. There are between 8,000 and 9,000 deer, many wild boar and lots of wild turkeys. The
turkeys are left alone because they are not very good to eat. After boiling a turkey all day, it will still bounce when dropped. 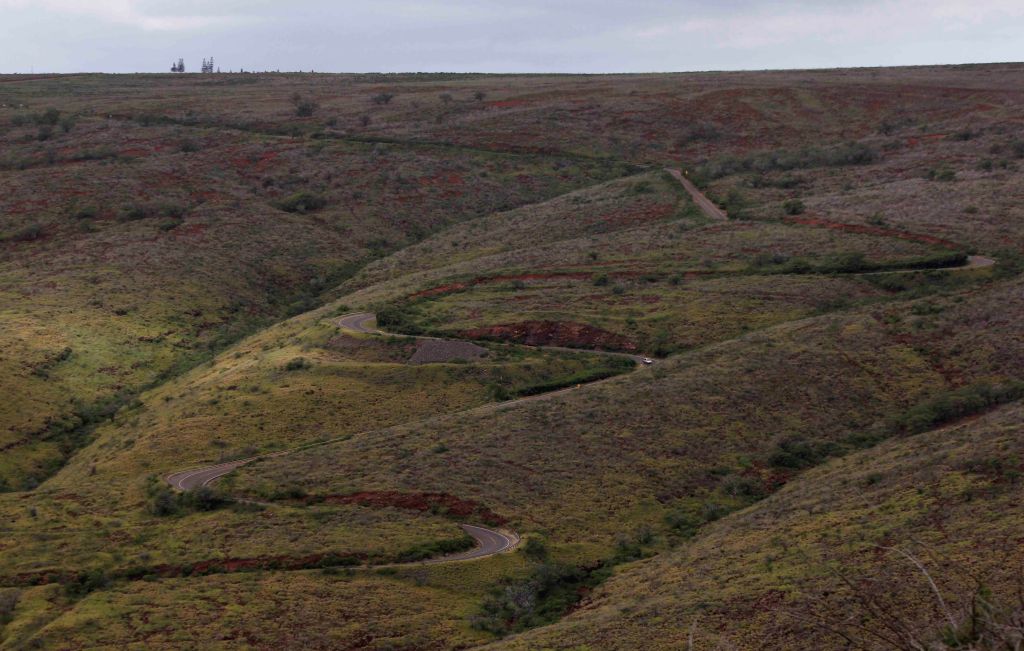 The first road we took was south to the Four Seasons Resort. Many deer can be found here. 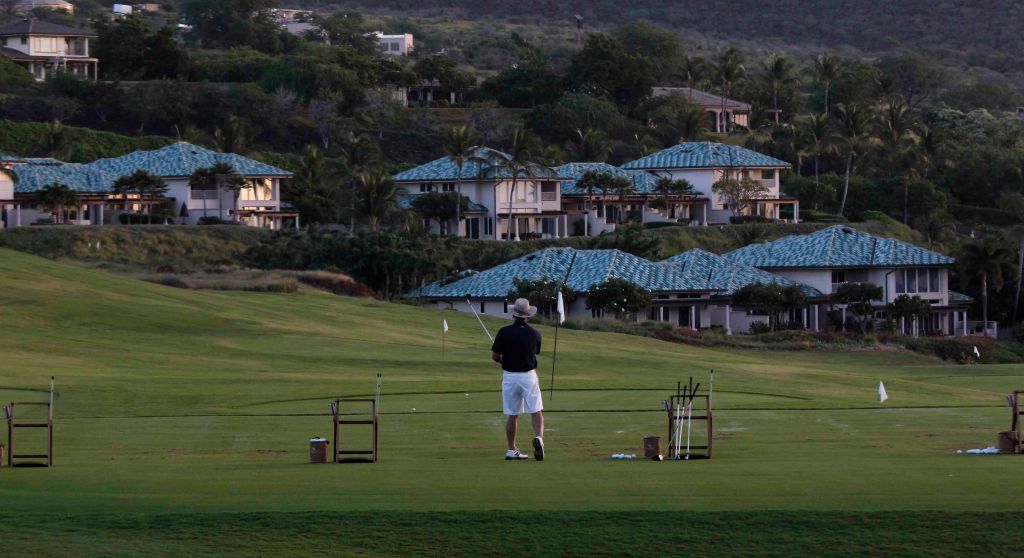 The Manele Golf Course at the resort. Green fees for visitors are US$ 425, and US$ 350 guests at the resort . There are two other golf courses close to
Lanai City. Keole Golf Course will be run by Four Seasons. The Cavendish Golf Course was built in 1947 for plantation workers and is free for anyone.

The golf course goes over cliffs along the shore.

The resort with the golf course on the left. White Manele or Hulopoe Beach Park to the right. The beach is considered
one of the most beautiful in the world and was where the final beach scene in From Here to Eternity was filmed.

View from the Resort. The cheapest rooms, with a garden rather than beach view, were US$ 1,400
per night, without breakfast. We were told that the highest occupany the hotel ever had was 50%.

Near the resort lies the Púu Pehe or Sweetheart Rock, a spiritual place respected by locals. The summit is 80 feet high.

A tiny crab found on the beach. 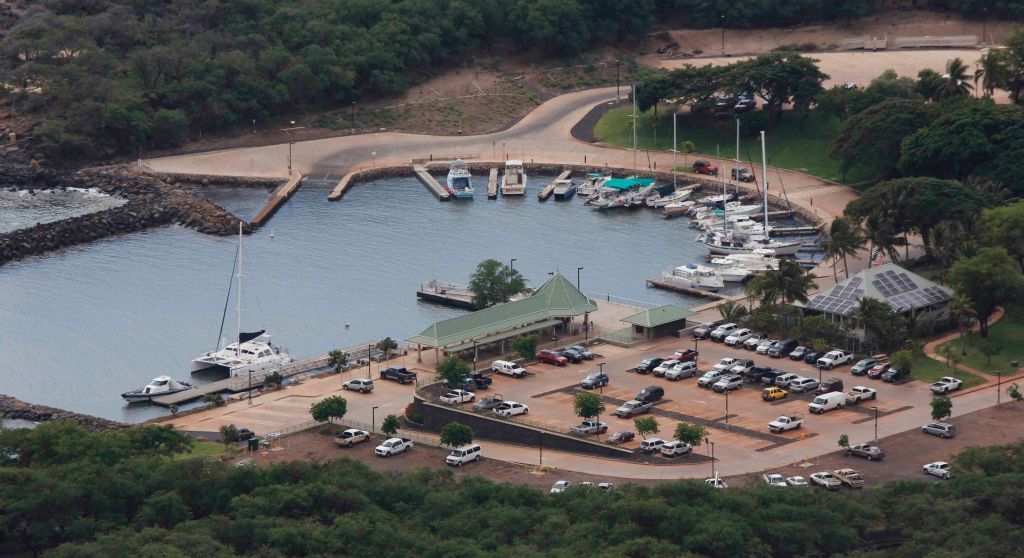 Manele small boat harbor. There is a ferry to Maui and diving boats to take tourists to the coral reefs.

Vernon took us to areas he knew from deer hunting. Pineapples used to be grown on the fields,
developed by Dole around 1922, when Lanai was the biggest pineapple plantation in the world. 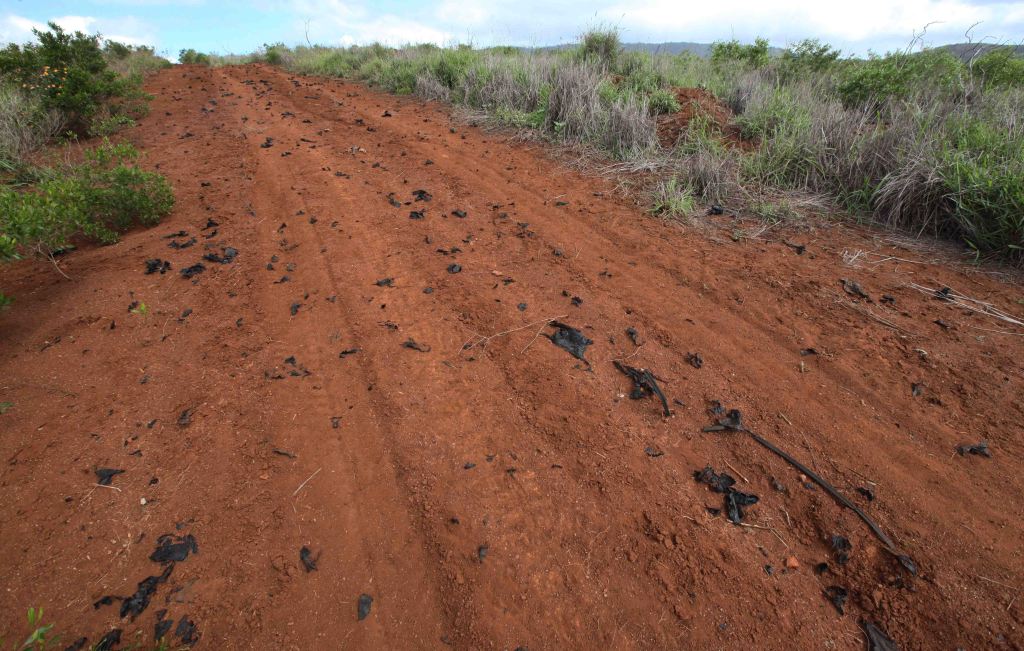 Many roads looked like this, covered with shredded black plastic. The plastic was used to discourage weeds around the pineapple plants. 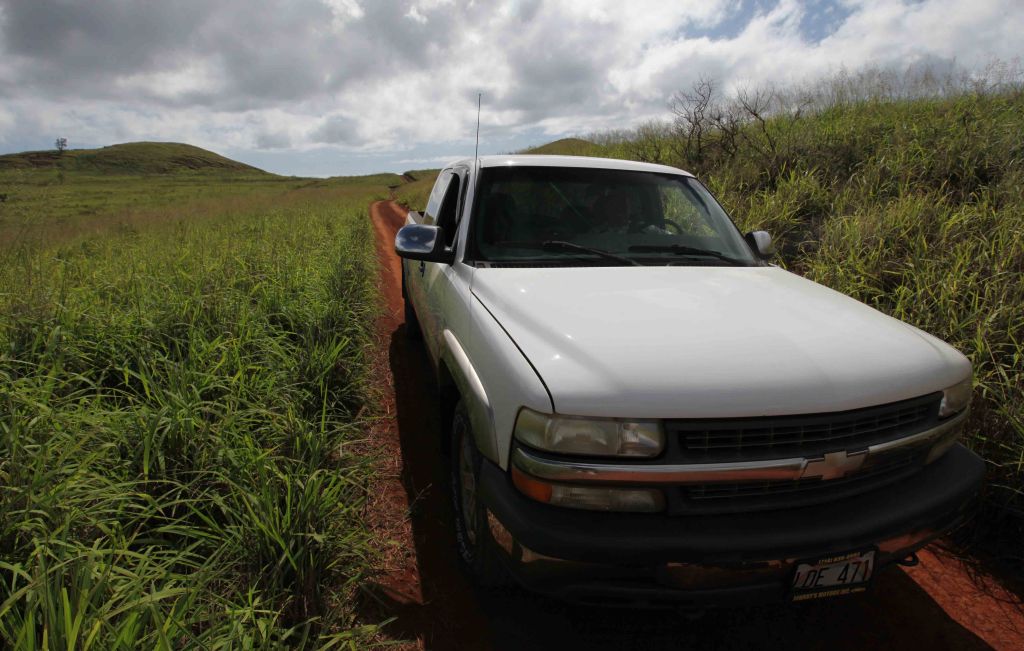 Fields that were used to grow pineapples are now good growing ground for lantana, an invasive weed.

Almost all of the 3,000 inhabitants on Lanai live in Lanai City. It was labelled an endangered historic
site in 2009 as it is the only remaining plantation town in the state of Hawaii. It dates from the 1920s.

The town surrounds Dole Park where this memorial stands.

The Lanai branch of the University of Hawaii, next to the Dole park.

There are many shops where artists display their goods, also next to the Dole park.

We had an overwhelming meal at the Blue Ginger Cafe. When we asked what was in Bento, the response was “everything”. That is what we
ordered. Omelet with fish cake, Portuguese sausage, Spam, fried chicken, teriyaki chicken, tempura shrimp, potsicker and two scoop rice.

Vernon took us to the northern part of Lanai. Maui is over the water. The waters between the islands are
among the best in Hawaii for whale watching. Currents are very strong, making it difficult to navigate. 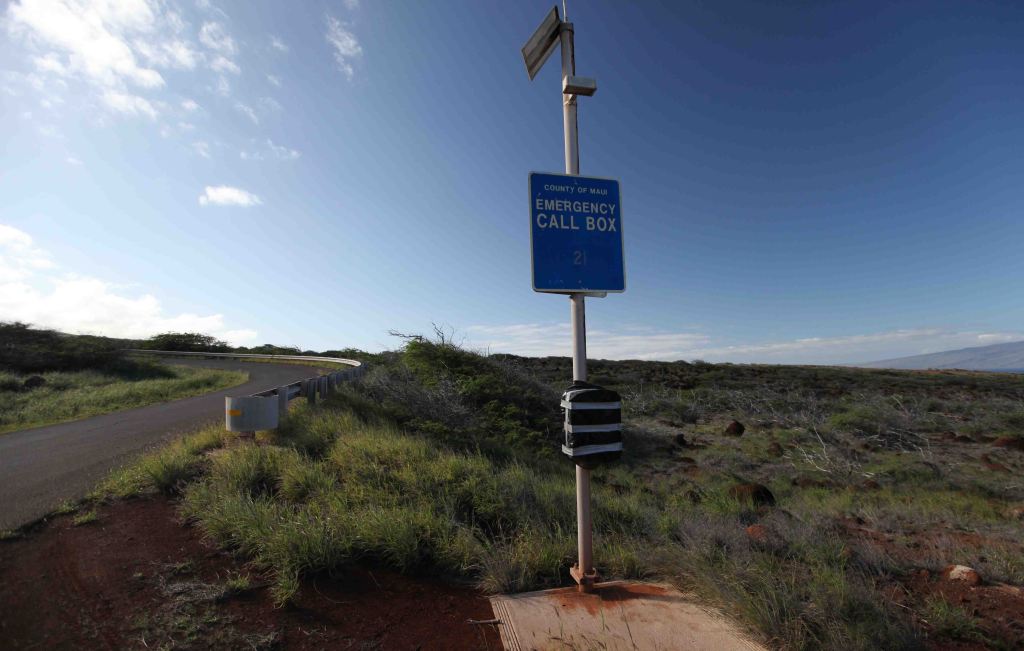 People are very friendly, and there were cars passing every now and then. So perhaps there is no need for an emergency phone. 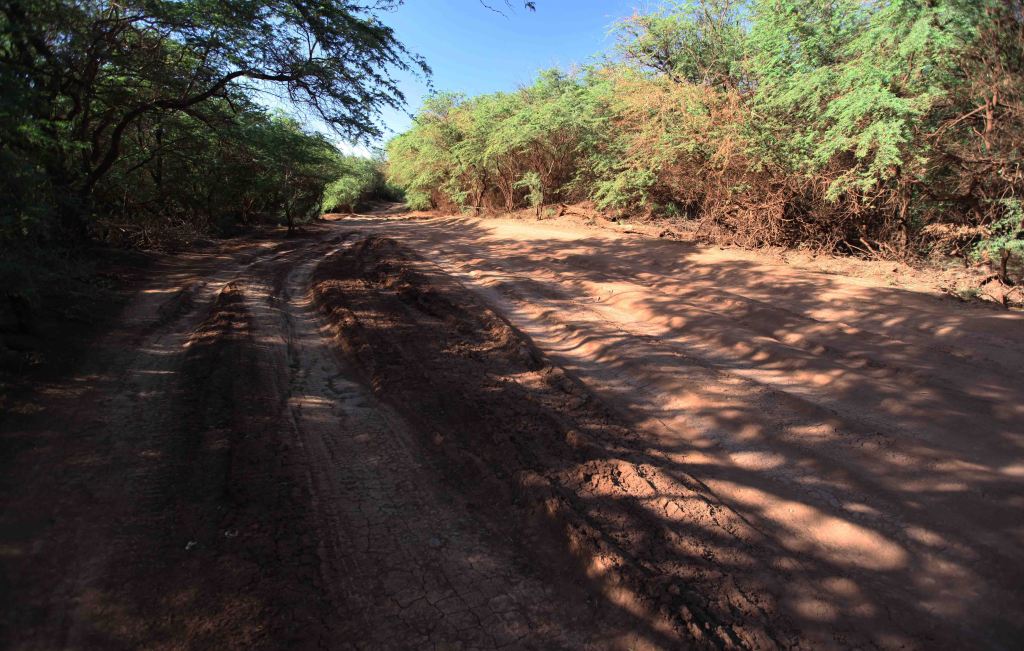 We drove on a sand and mud road along the beach, thankful that it had been dry for a while.

The road took us to Shipwreck Beach, a “must see” on Lanai.

The beach is not suitable for swimming because of the strong currents. The waters are
dangerous for ships as well. Many ships went onto rocks along this stretch of the island.

The Liberty shipwreck from WWII is here, not because of the dangerous coast, but because it was a cheap way to dispose of the boat. 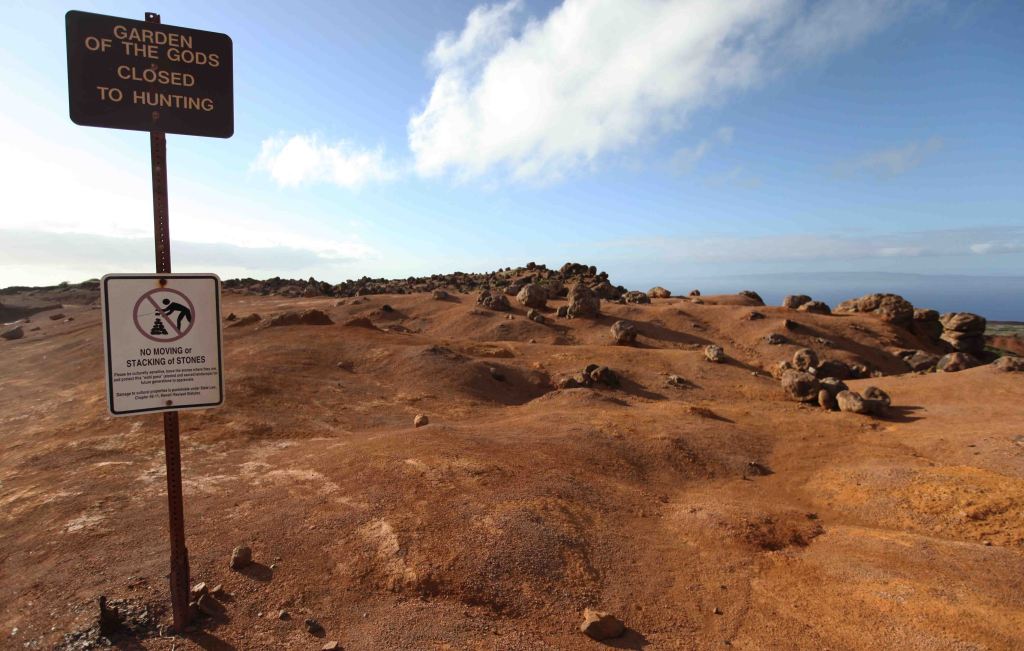 We came to the Garden of the Gods late in the afternoon, another “must see” when on Lanai. The odd rock formations
are created by wind erosion, wearing away softer rock and leaving boulders of harder rock sitting on the surface.

The area, called Keahiakawelo in Hawaiian, is 45 minutes from Lanai city by four wheel drive road.

It is best to visit early or late in the day when the sun is not directly overhead. It is also possible to see other islands from here. 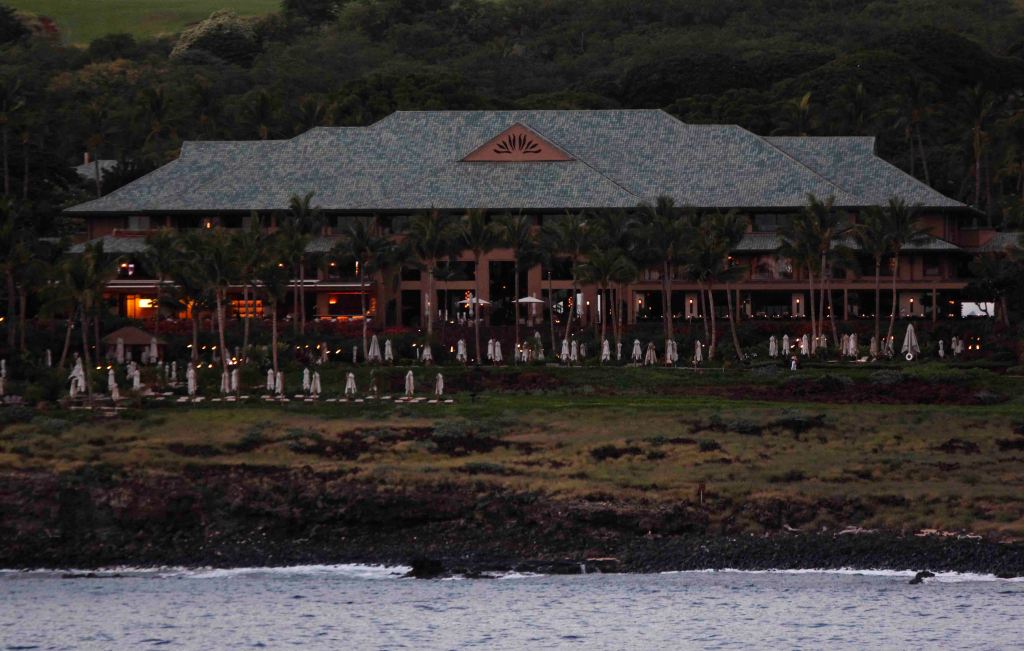 We drove back to the Four Seasons Resort for the sunset. 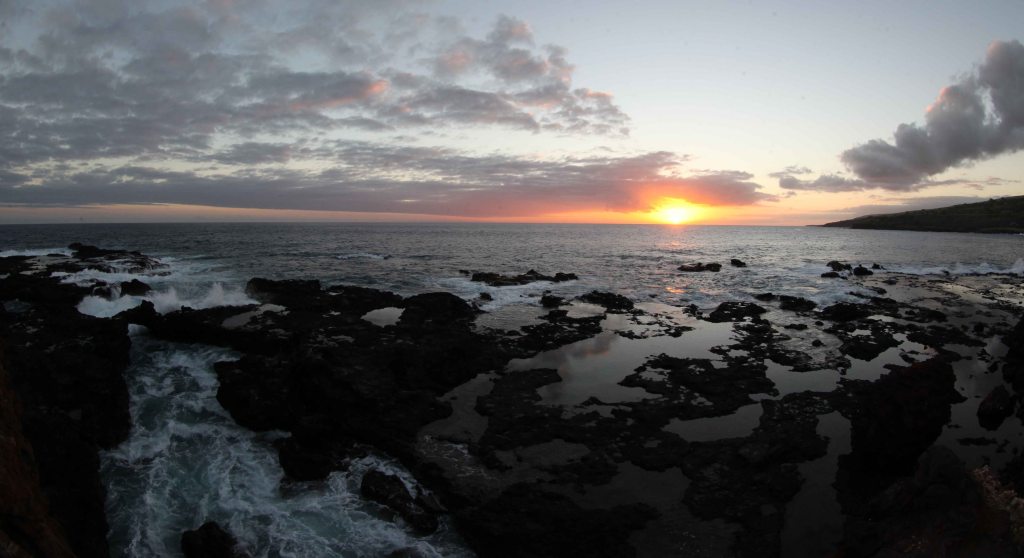 We got there just in time, after a very full day. We saw a lot, with no need to rush.