We spent the morning at Tjakupai Aboriginal Cultural Park and then
walked a short distance to take the Skyrail Rainforest Cableway to Kuranda.

The visit to the cultural park started with a presentation of aboriginal history and clans.
The acoustics in the hall were bad, and it was difficult to understand the presentation. 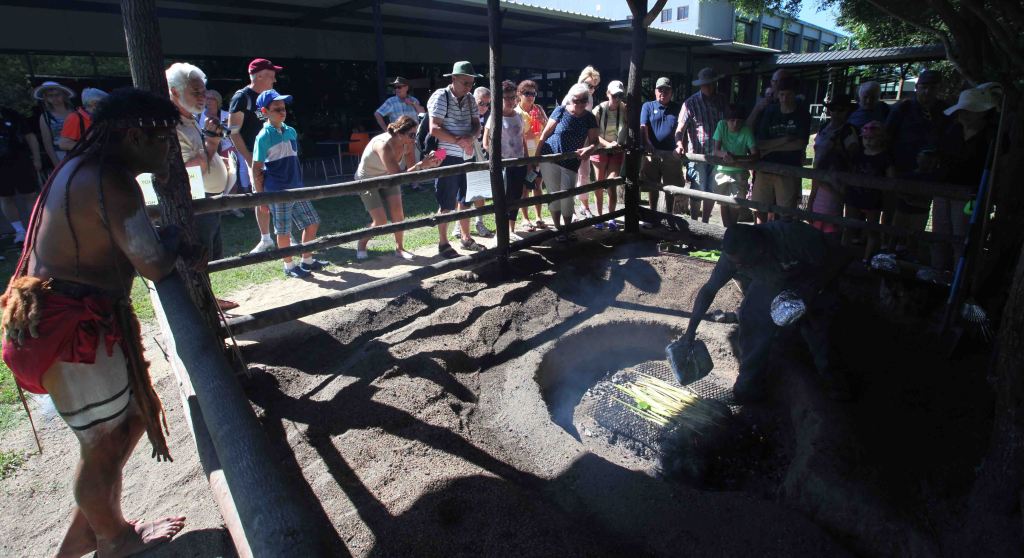 Traditional way of roasting meat in an earth pit, similar to the traditional Hawaiian imu. The wrapped meat
is placed in the hot sand, covered with hot rocks, covered with damp banana leaves and then buried under soil.

There are several types of boomerangs. We were shown different types of hunting weapons.

It took a couple of minutes to get the fire going.

Traditional dances and musical instruments. Boomerangs and sticks are
used to make rythmic clicks to accompany the sounds from the didgeridoo.

The public was invited to dance and sing.

And there were lots of visitors.

A lesson in aboriginal botany and what the rain forest could supply as remedies against different illnesses.

There is a difference between left handed and right handed boomerangs.

Throwing a boomerang is not at all easy. See the boomerang to the left in the picture.

The student despairs but the teacher is very sympathetic.

Throwing spears was not easy either, as one uses a special throwing stick to launch the spear.

We had a very good view of the rain forest under.

There were two places where you step off to change cars and can stop for a closer
look at the forest. The cable runs continuously and it does not take long to get a car.

There were boardwalks for tours at the two stops.

View of the Baron Falls, which did not have much water.

The rain forest seen from above. The palms are a special type of climbing
plant that needs support from other trees to reach the top of the forest canopy. 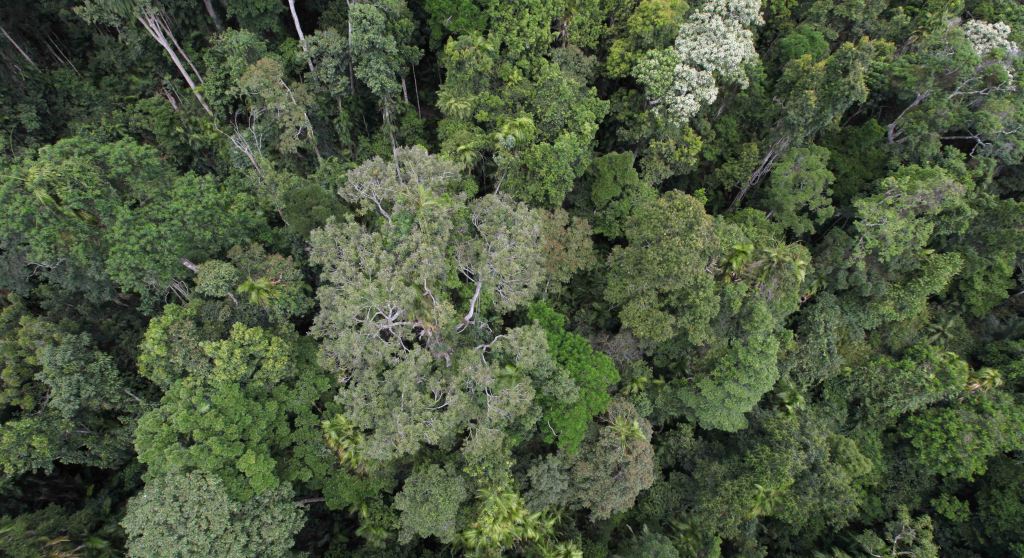 View as we near the end of the Skyrail. 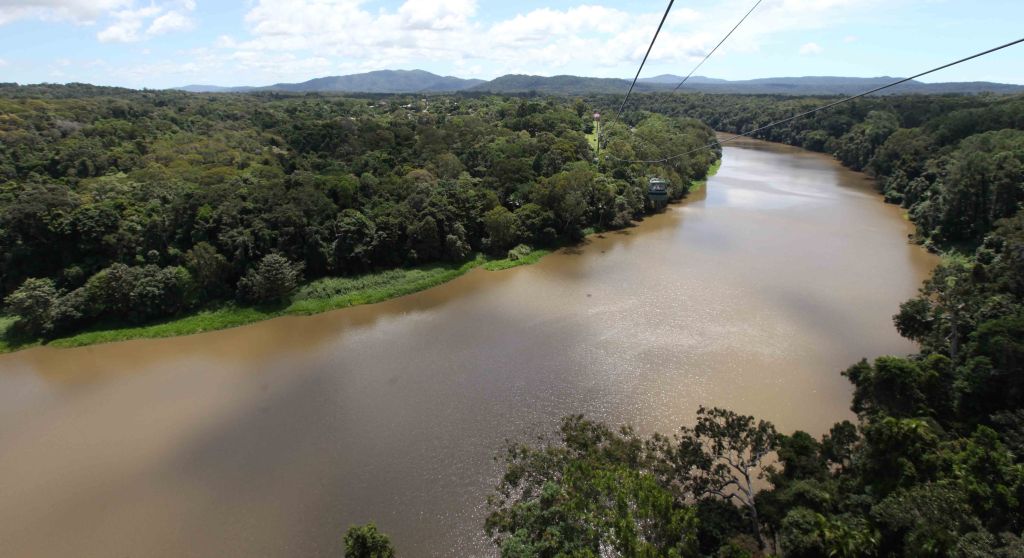 The end of the Skyrail, on the other side of Mitchell River.

We had time for a lunch, some tourist shopping and a final beer before
we caught the train. In April the train ran twice a day in each direction. 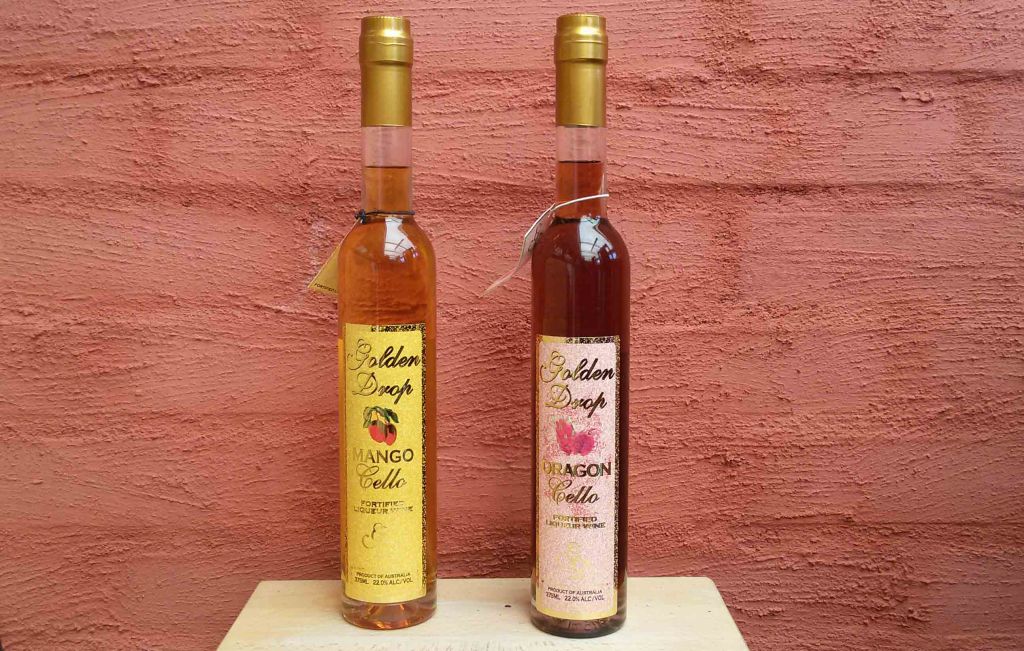 We bought some locally produced fruit liquer. This is the best of the local fruit wines we tasted.

The Kuranda Scenic Railway. All passengers must have a booking and assigned seats.

The narrow gauge railway goes through thick rain forest, and you cannot see much from the train for most of the trip.

Our wagon during the one stop on the way. Many passengers are outside. 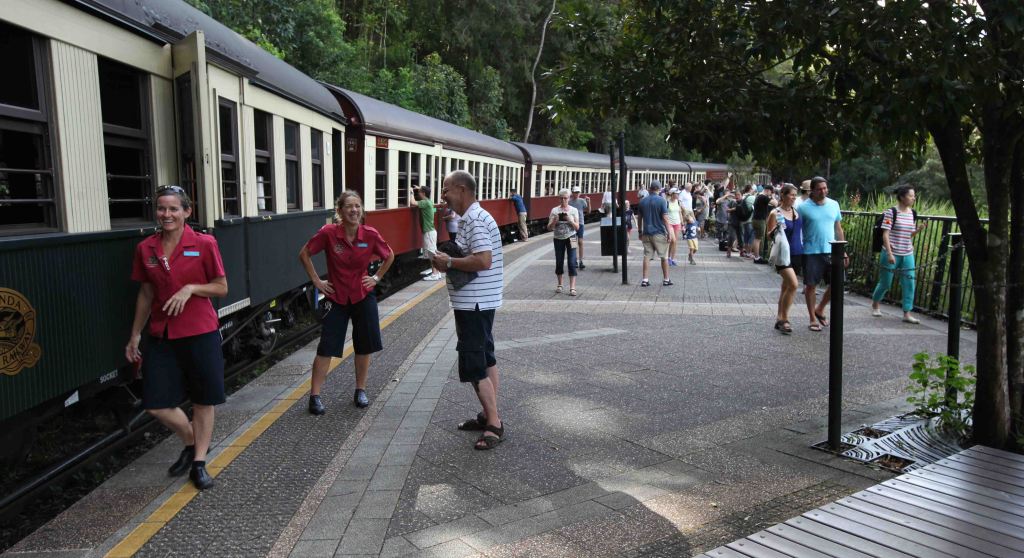 The train staff were very friendly.

The staff walked around and offered to help to take group photos.

One of 15 bridges along the way. There are also 37 tunnels. Construction
was very difficult. Passenger services began operations on 25 June 1891.

View from near the end of the line.

The train was very long, with 17 wagons. We felt that we did the trip in the right way, starting with Skyrail to get
up to Kuranda, and taking the train coming down. The Skyrail was a more interesting trip with lots to see. One saw
dense forest from the railway, and the train made an unpleasant high pitched grinding sound most of the way down.

We returned to Trinity Beach, where we stayed at Blue Lagoon, in time for an afternoon dip in the sea.

Trinity Beach was an important training ground during WW II, as it is close to Asia.

Now there are different “enemies” to look out for — crocodiles and marine stingers. 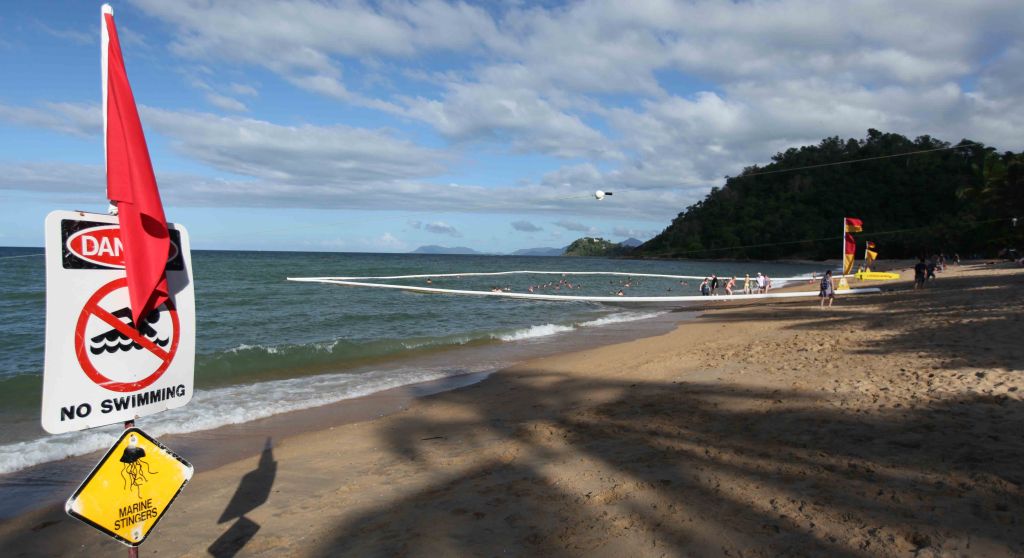 The net in the water was to keep out marine stingers, the notorious box jelly fish.

A few Cockatoos on a lamp post near our hotel. There were lots of them, and they made a lot of noise.